PHILADELPHIA (CBS) -- A surge in carjackings is another troubling statistic confronting Philadelphia crime fighters. The latest was caught on a security camera.

The number of carjackings in the city is increasing at an alarming rate, and in at least three recent incidents, weapons were involved.

Surveillance video of an early morning carjacking in Holmesburg shows the victim running away from the suspects.

Police say the suspects knew the victim's routine and waited for the man and his girlfriend to come out to move their Dodge Chargers.

The thieves only got away with one of the cars, but not before police say they shot the 31-year-old man.

"It's scary. It's too close to home," one neighbor said. "There are a lot of children on this street. Families going in and out all times of the day and night. It's just really scary."

The concerned neighbor doesn't want to reveal her identity for fear the suspects will return.

Wednesday night, near Temple University, police arrested one of three suspects who stole a Chevy Cavalier at gunpoint.

On Tuesday night, a vehicle was stolen with a 6-year-old-girl inside. The next morning, the car was left across the street from a police station with the child inside unharmed. 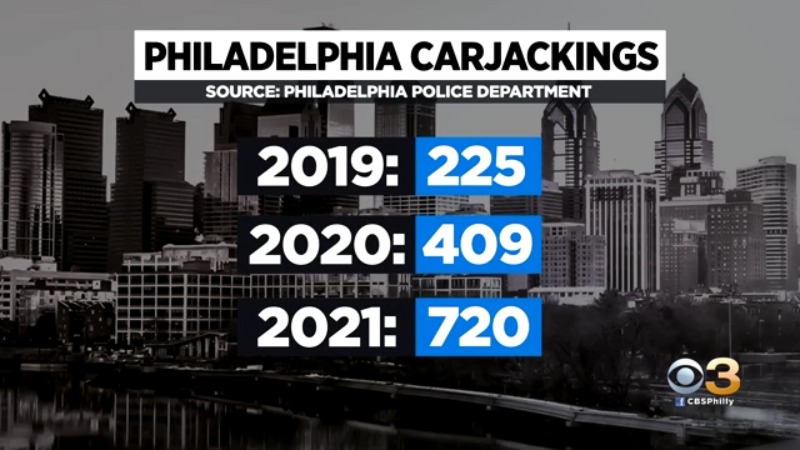 Police have released surveillance video from another carjacking on Nov. 19, where a 54-year-old victim parked his car on the 2200 block of South 20th Street. As he and his family exited the vehicle, two men held them up at gunpoint, robbed them and then stole their vehicle.

Authorities are reminding everyone to be aware of their surroundings and make sure they get in and out of their car swiftly.

If you recognize anyone in those surveillance videos, you're urged to call authorities.