NEWTOWN TOWNSHIP, Pa. (CBS/AP) -- On the Republican side of the Pennsylvania primary, things are still up in the air for the U.S. Senate race. Former hedge fund CEO Dave McCormick and Dr. Mehmet Oz are in a race too close to currently call.

Results are still up in the air with thousands of ballots still left to count across the state.

With 95% of precincts reporting, Trump-backed TV Dr. Oz has a narrow lead over McCormick. Kathy Barnette is in third place. 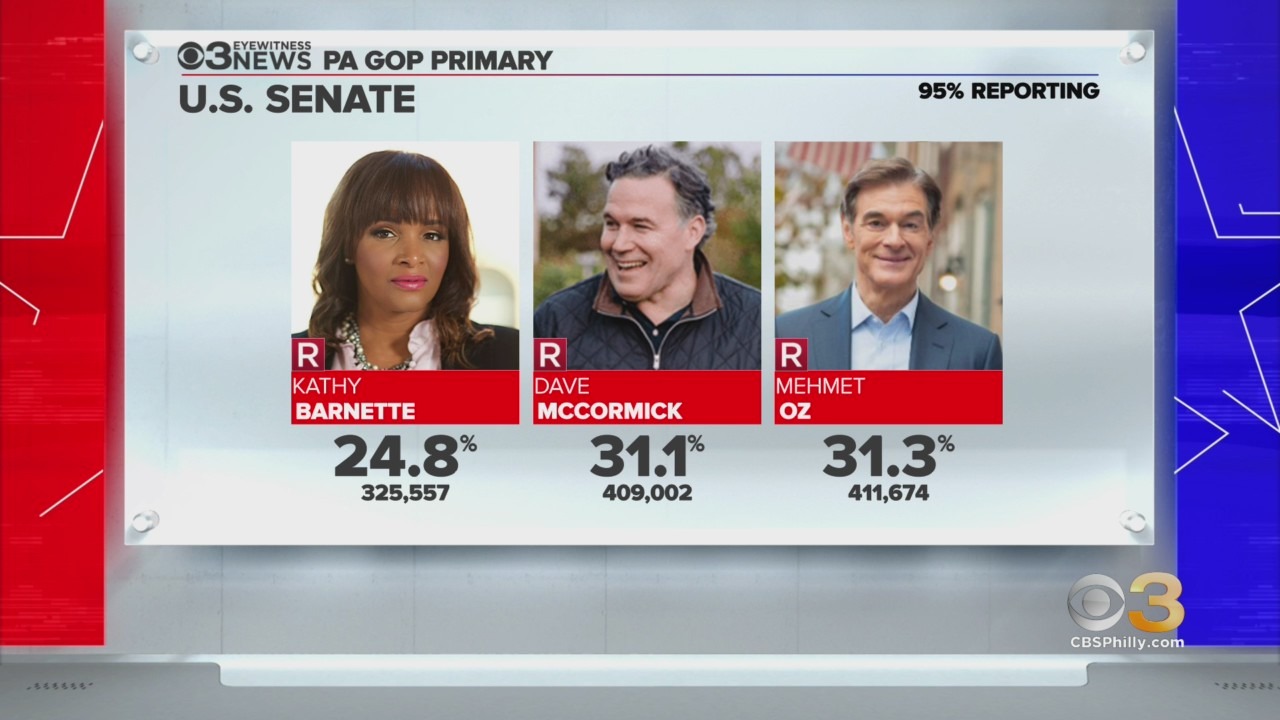 Barnette faced backlash in recent days after images recently surfaced appearing to show her marching to the capitol on Jan. 6 with members of the extremist group, the Proud Boys.

Barnette served in the Armed Forces Reserves and was an adjunct professor of corporate finance and a political commentator.

It wasn't the victory party Dr. Oz was hoping for at his campaign headquarters Tuesday night. But with a slight lead and only about 5% of the votes left to be counted, Dr. Oz told his supporters winning would be worth the wait.

The race went back and forth all day Tuesday, and right now, Dr. Oz and McCormick are only separated by a few hundred votes.

Both candidates spoke with a group of their supporters late last night. They acknowledged the race is still too close to call, but both expressed confidence they will ultimately win this race, thanks in big part to their robust support system.

"There's been a huge outpouring of support," McCormick said. "We knew it, we felt it on the ground, we knew it was working, we knew our message to take back this country. We knew our message was resonating with the voters of Pennsylvania and they showed it today, and we're so incredibly grateful. Thank you all so much."

"When our city on this hill is shining bright others see it and they make their cities bright as well," Dr. Oz said. "That's why I'm running for the senate. That's why I'll be the next senator of Pennsylvania, and that's what I promise we'll bring to the United States of America. God bless you all."

Pennsylvania state law requires a recount when the margin of victory is less than or equal to half a percent of the total vote.

By that metric, it appears this race is headed for a recount.