So here we are at the end of the road, our Potter training behind us, as it were.

Ten years and seven movies later, Harry Potter and the Deathly Hallows: Part 2, the imaginative, energetic, and climactic final installment in the admirably realized and fantastically successful series of movie adaptations of JK Rowling's epic, seven-novel fantasy about a boy wizard, finally (or is it too quickly?) arrives.

It's the movie version of the second half of the seventh and last book, and the conclusion of the highest-grossing international franchise in movie history.

Let the record show that the majestic final cinematic chapter goes in the books, despite carrying an intimidating level of lofty expectations, as a laudable successor to its "Harry Potter and the"  predecessors -- Sorcerer's Stone (2001), Chamber of Secrets (2002), Prisoner of Azkaban (2004), Goblet of Fire (2005), Order of the Phoenix (2007), Half-Blood Prince (2009), and Deathly Hallows: Part 1 (2010).

HP VIII holds up in its expert delivery of the final battle, the showdown between good and evil that the series has been leading up to and that we have been keenly awaiting for a decade and through eight movies.  And it does so while delivering propulsive action, glancing back so that we get to reminisce just a bit, and tying together an impressive number of not-so-loose ends.

And although it's best viewed as the second half of a long film, it moves -- and compels us -- sufficiently to seem to justify the decision to split the movieization of Rowling's final book into two movies, which some detractors in the critical community (ahem) questioned, even though they (ahem) admired Part 1.

Part 2 follows right on the heels of Part 1, which was well made and darkly diverting but stubbornly incomplete as it barely stood alone, serving mostly as an appetite-whetting prelude to its followup, which finds Harry and his friends in an all-out war against the evil, snake-snouted Lord Voldemort (Ralph Fiennes) -- He Who Must Not Be Named -- who kicks off this ultimate episode by raiding headmaster Dumbledore's tomb in search of the Elder Wand, one of three Deathly Hallows that can grant him his cherished immortality.

Part 2, the shortest entry in the series at 131 minutes -- and written by Steve Kloves, who has authored all but one of the screenplays -- finds Harry (Daniel Radcliffe), Hermione (Emma Watson), and Ron (Rupert Grint), our three favorite and most familiar characters to emerge from the Hogwarts School of Witchcraft and Wizardry, still in the wilderness, just as they were when Part 1 ended.

They are trying to find and destroy the four remaining Horcruxes, which contain small portions of Voldemort's soul.  He has hidden them in several places, and one of them is in Hogwarts, about to become a stormed fortress. 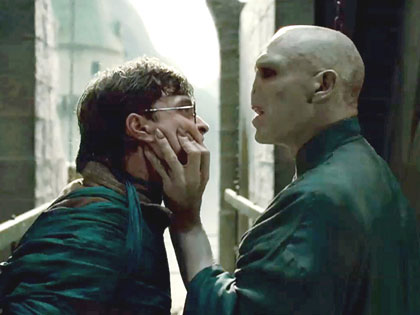 It should be mentioned here that there is so much plot, so many characters, and so much history that only a devoted fan or someone who has just read the book can remain clear on exactly what is going on and why at any given moment throughout the final installment -- but that the production values are so consistently and comfortingly high that the film can be enjoyed regardless.

Still, this final piece of Pottery will certainly be much more rewarding for completists who already have the other seven installments under their proverbial belts.

With four different directors, the series has maintained an astonishing level of quality -- obviously a tribute to Rowling's inspiring source material.

In this darkly beautiful and emotionally commanding eighth undertaking, as has been the case all along, the sets and the special effects and the musical score are first-rate -- smoothly efficient and undeniably impressive without being pushy -- and the cast is entirely watchable.

Director David Yates, at the helm of his fourth straight offering in the series, keeps the combat and conflict close to constant; much more than any of its predecessors, this one is essentially an action flick.

But that doesn't mean that he stints on character-driven drama: there's nothing like high stakes to heighten the emotion. And the theme of overcoming the darkness within us registers loud and clear.

So we'll cast a spell of 3 stars out of 4. The epic and cathartic Harry Potter and the Deathly Hallows: Part 2 is a worthy farewell that, to no one's surprise, packs a wizardly punch.