MOUNT LAUREL, N.J. (CBS) -- A South Jersey man accused of harassing his Black neighbors is behind bars. Hundreds of protesters gathered outside of 45-year-old Edward Cagney Mathews' home in Mount Laurel after video of his racist rant against his neighbor went viral on Monday. 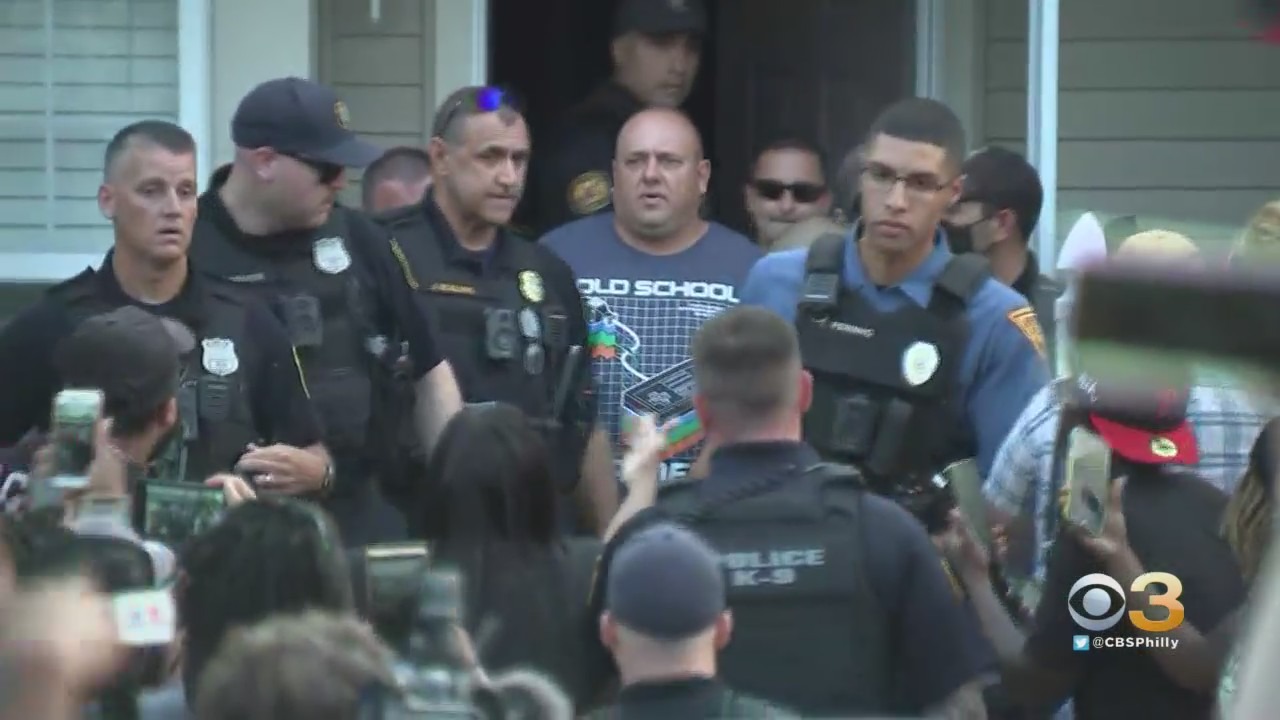 Protesters were angry that Mathews, seen in videos using racial slurs, was charged with harassment, but then allowed to return home.

New charges have emerged Monday evening as Mathews was taken into custody in dramatic fashion.

According to neighbors, the harassment went even beyond the use of racial slurs. One woman said Mathews kicked down her door and vandalized her vehicle.

It was a dramatic home removal for a man who many claim has been harassing neighbors outside of his Mount Laurel home for years.

Police were called to Mathews' home Friday shortly after a disturbing video went viral where police say Mathews was "shouting offensive and racial slurs" at a neighbor.

"This is not Africa," Mathews can be heard saying in the video. He allegedly continued to hurl racial slurs.

On Friday, Mathews was charged with biased intimidation and harassment.

"A judge decided that they should be on a summons so that evening, Mr. Mathews was released," Mount Laurel Police Chief Steve Riedener said.

"This is America, we all live here, we cannot put up with this," Alyia Robinson said.

Several years ago, Robinson's daughter, Jazmyn, lived in an apartment below Mathews in a different nearby apartment complex. Once the recent video was shared online, she decided to upload one she had taken back.

"I'm literally in fear all the time living with my son, like what am I supposed to do?" Robinson said.

Another neighbor said that at least 10 others have been continually harassed for the color of their skin.

"He used a BB gun to shoot their windows out, he smeared dog feces all over their car," one neighbor said.

"I totally understand why the protestors were here today. They had seen videos that weren't available to us on Friday night that were even worse," Burlington County prosecutor Scott Coffina said.

Once the new video was reviewed, new charges were added, including assault. The decision was made to arrest Mathews.

The protests that had remained calm all day got heated as police and SWAT units pulled Mathews from his home.

Several bottles were thrown at Mathews' home and at the police, but many community members urged that action to stop.

Police remain on scene and say two arrests were made as mace was allegedly tossed by a member of the crowd.