The video that has gone viral shows a Philadelphia police officer in a white shirt hitting a protester with a baton in or around his head. The officer has since been identified as Bologna. 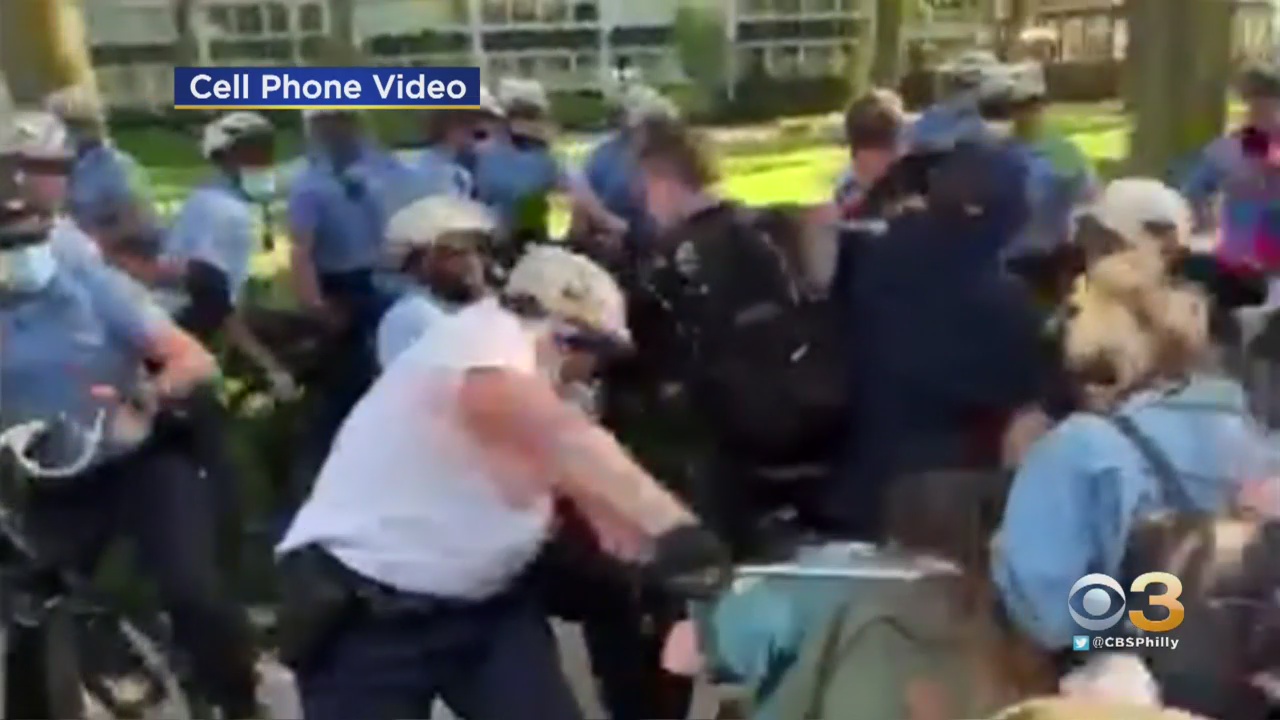 It's one of the videos that's led to Commissioner Danielle Outlaw launching several concurrent internal affairs investigations amid the protests.

"Some of the videos depict conduct that appears to be within our policy guidelines, however, some of the images are disturbing and depict behavior that does not appear to be in accord with our policy," Outlaw said. "We are trained to use force when needed. At the same time, the force needs to be proportionate to the threat that they perceive or see. We don't have right now what all of those circumstances are."

The video provided to Eyewitness News depicts Bologna striking a 21-year-old Temple University student, identified as Evan Gorski, with a baton and arresting him Monday during protests near the Benjamin Franklin Parkway in Center City.

"That is one. We have been receiving several videos with disturbing images," Outlaw said.

Outlaw did not identify Bologna as the officer in the video but did confirm he was no longer on the streets after charges were dropped against Gorski this week.

Bologna will be charged with aggravated assault, simple assault and other related charges.

"We are trying to be fair. Accountability has to be equal. This moment demands a swift and evenhanded response to violent and criminal acts based on the facts and evidence," District Attorney Krasner said. "Americans are taking to the streets to demand a remaking of political, economic and legal systems that serve the powerful at the expense of citizens' health, welfare, and lives. There can be no safety or peace without justice. My office will continue to hold people who cause harm to others equally accountable."

Philadelphia Fraternal Order Of Police President John McNesby came to Bologna's defense, calling him one of Philadelphia's most decorated and respected police leaders. Bologna had been with the department for 30 years.

"It's an absolute disgrace. It's a slap in the face to every officer in the City of Philadelphia under these conditions, while we're out there hustling from morning to night," McNesby said. "To be fired with zero investigation, I mean, none. We look forward to defending Inspector Bologna and he's going to have every resource available to prevail in this case."

McNesby tells Eyewitness News that the DA's decision to arrest Bologna promotes his anti-police agenda in the city.

"It sends a bad message to the cops on the street," McNesby said," especially with all the weekend events."

In a statement, Outlaw said Krasner's decision to charge Bologna "does not diminish or detract from the efforts of our many officers who have worked tirelessly for extended hours and under tense and stressful conditions."

"As a Department, we do not condone the criminal acts of any person, and it is my sincere hope that the District Attorney does, in fact, hold all people who cause harm to others equally accountable," Outlaw said. "These officers have demonstrated professionalism, dedication, and an unwavering commitment to our mission during tenuous and often volatile periods."

Outlaw says there will be far more police staffed Saturday than there was last weekend with a planned protest scheduled at the Philadelphia Museum of Art.

"Today, I learned from Philadelphia District Attorney Larry Krasner that he has filed criminal charges against Staff Inspector Joseph Bologna, who is assigned to the Police Department's Patrol Bureau. While I have not been made privy to the entirety of the information that led to Mr. Krasner's decision to charge Staff Inspector Bologna today, I am aware that the charges stem from an incident involving the application of force, which occurred on Monday, June 1, approximately 5:30pm, in the area of 2400 Ben Franklin Parkway. As I stated earlier today, an internal affairs investigation had already been initiated; and irrespective of the District Attorney's prosecution, the internal affairs investigation will continue.

As a Department, we do not condone the criminal acts of any person, and it is my sincere hope that the District Attorney does, in fact, hold all people who cause harm to others equally accountable.

To be clear, the District Attorney's decision to charge Staff Inspector Bologna does not diminish or detract from the efforts of our many officers who have worked tirelessly for extended hours and under tense and stressful conditions. These officers have demonstrated professionalism, dedication, and an unwavering commitment to our mission during tenuous and often volatile periods.

As is always the case, throughout this protracted period of unrest, we will continue to vigorously uphold and support every person's constitutionally protected freedom to peacefully assemble, and grieve governmental, societal and economic injustice."

CBS3's Dan Koob and Jessica Kartalija contributed to this report.