PHILADELPHIA (CBS) -- After months of an extensive nationwide search, the Philadelphia Board of Education has whittled the list down to the final three candidates for superintendent of the School District of Philadelphia.

"We hired a search firm. They reached out to more than 400 individuals. We have narrowed it down to three finalists," Philadelphia School Board President Joyce Wilkerson said. "We're excited about that, it's been quite the journey."

The journey began when Dr. William Hite announced last summer that he would be leaving at the end of this school year. After an unprecedented 10 year tenure as superintendent, the board was thrust into search mode for his replacement making sure the community had a voice in the process with more than 46 public engagement sessions.

"We had an extensive listening session with the Philadelphia community. We received input from more than 6,000 individuals. We developed a 27-page report that reflected on what it is we heard, what it is that people want in the next superintendent," Wilkerson said. 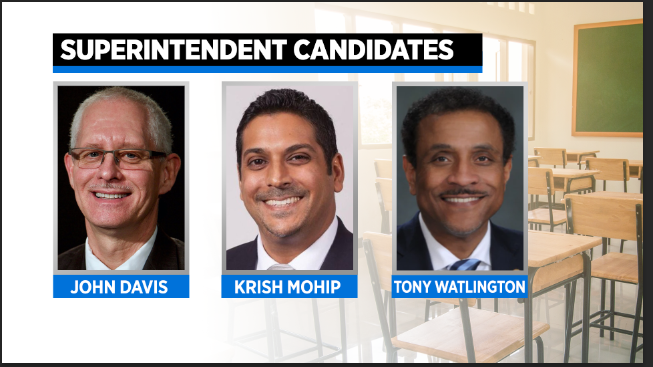 The final three candidates are John Davis, who is chief of schools for the city of Baltimore.

"He has been an educator working for the last 30 years in education in large urban districts," Wilkerson said.

Wilkerson adds, "Our final candidate is Tony Watlington. He is currently sitting as superintendent of the Rowan-Salisbury School District in North Carolina."

All three candidates have 25 to 30-year backgrounds in education.

"Having a background in education was important to people," Wilkerson said. "There was some talk about non-traditional candidates but the overwhelming concern was that we get an educator in here."

The three finalists will be in Philadelphia next week to meet with students, parents and community members virtually and via town halls, in one final push to convince them why they should be at the helm of the School District of Philadelphia.

"They believe in children. Children will come first for all of these candidates and we're excited about that," Wilkerson said.

The school board hopes to have a final decision on the new superintendent by the week of March 21.

The town halls will be held next Monday, Tuesday, and Wednesday in the auditorium of the school district's education center. The town halls run from 6 p.m. until 7 p.m. You do have to register ahead of time. The events will also be streamed live on the district's Facebook page.