PHILADELPHIA (CBS/AP) - Former vice president and Pennsylvania native Joe Biden is kicking off his campaign rally in Philadelphia on Saturday, May 18. The Democratic presidential hopeful and his family will speak at Eakins Oval, located at 2451 Benjamin Franklin Parkway, at 1 p.m.

Doors to the event open at 11 a.m. and the event is scheduled to end at 2:30 p.m. You can sign up for the event, here. You'll need to provide your full name, email, phone number and zip code. Your ticket will then be emailed to you, which you'll need to show at the door to enter the rally. The event will take place outdoors.

"This Saturday, we're officially launching our campaign to unite this country in Philadelphia — the city that first brought our nation together over 200 years ago. We'd love to see you there," a tweet from Biden reads.

The following items will not be allowed at the event:

Road closures, parking restrictions, and detours will be in effect during the event. Delays can be expected and motorists are advised to avoid the area. 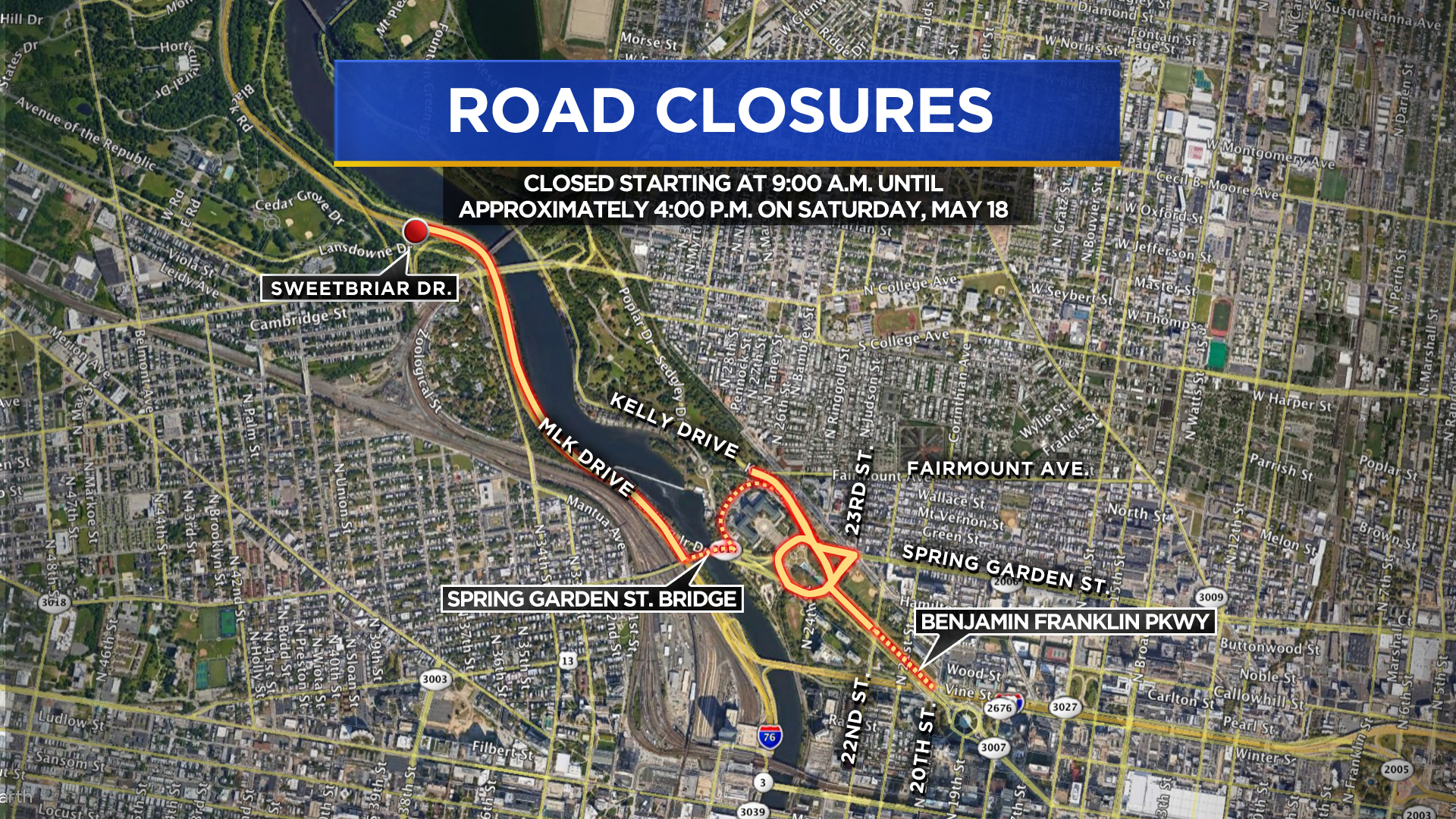 Road Closures and Detours
The following streets will be closed starting at 9:00 a.m. until approximately 4:00 p.m. on Saturday, May 18: 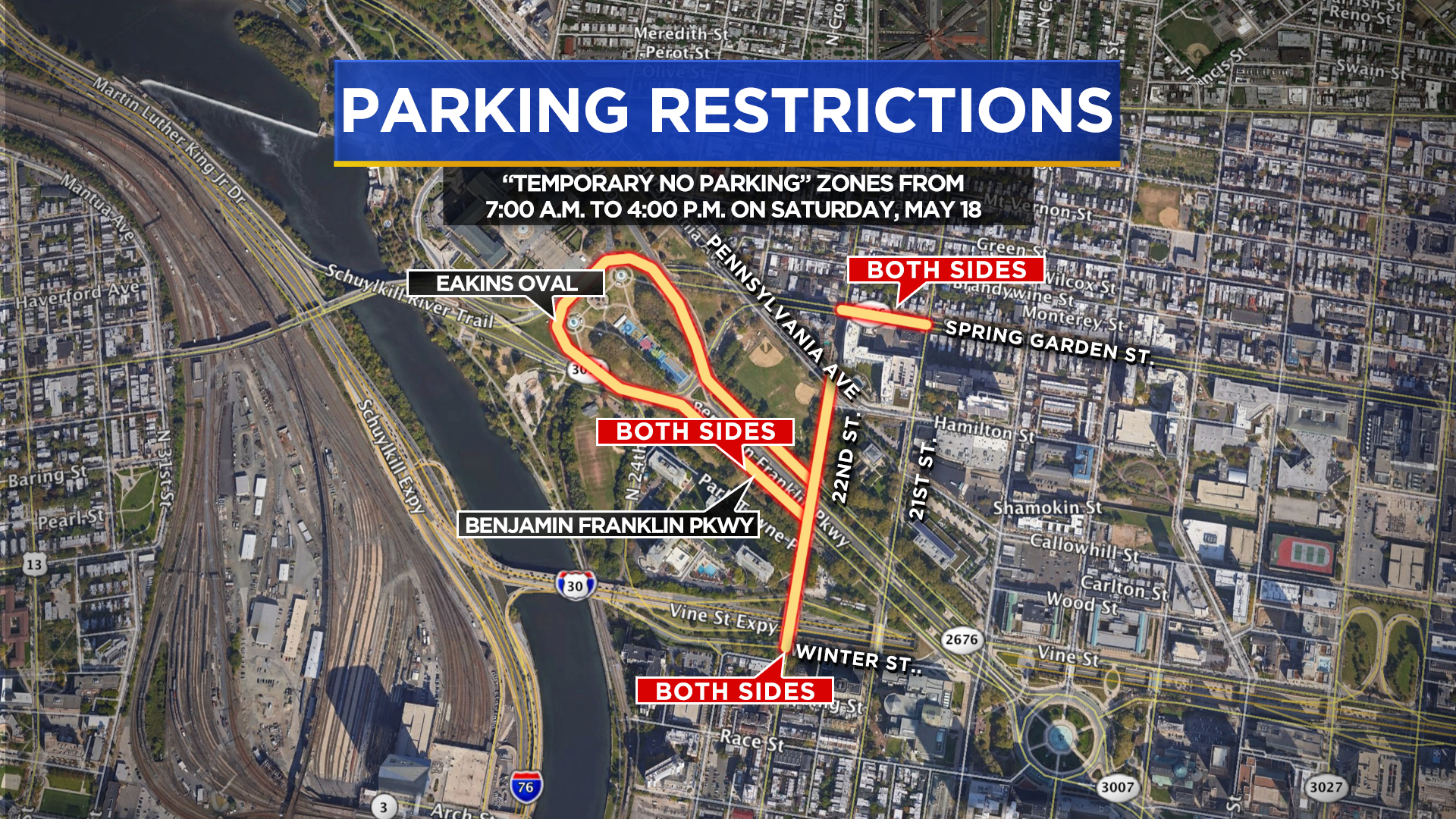 Parking Restrictions
The following streets will be posted as "Temporary No Parking" zones from 7:00 a.m. to 4:00 p.m. on Saturday, May 18:

SEPTA bus routes will be detoured from their normal routes through the Benjamin Franklin Parkway area beginning at 9:00 a.m. on Saturday, May 18 through approximately 4:00 p.m. Detours will be posted, and specific route changes are available on the System Status page at septa.org.

It is recommended that guests utilize public transportation options for travel to and from the event. If driving into Center City is necessary, commercial off-street parking lots and garages are conveniently located near the Benjamin Franklin Parkway and Eakins Oval. Attendees should contact individual facilities in advance for rates and availability or visit the Philadelphia Parking Authority's website at philapark.org for a list of parking options.

The general admission entry gate to the rally will be located on the north side of Eakins Oval. Due to event-related road closures, it is recommended that guests with mobility issues arrange for drop-off in the area of Pennsylvania Avenue and Spring Garden Street. This will provide the most direct route to the rally location at Eakins Oval. After drop-off, proceed southwest on Spring Garden Street towards Eakins Oval, and volunteers will direct you to the closest entry gate.

Can't make the event in Philadelphia? Sign up to attend a watch party near you.

This will be Biden's third time in the state since announcing his candidacy last month. The former vice president was in Philadelphia headlining a fundraiser at the home of David L. Cohen, executive senior vice president of Comcast. The following week he held his first public event as a 2020 presidential candidate in Pittsburgh.

Biden is paying special attention to his native Pennsylvania, a state that swung to President Donald Trump in 2016, after voting for Democratic presidential candidates for decades. While Biden represented Delaware in the Senate for 36 years, he was often referred to as Pennsylvania's third senator.

Biden is running against 22 other candidates.