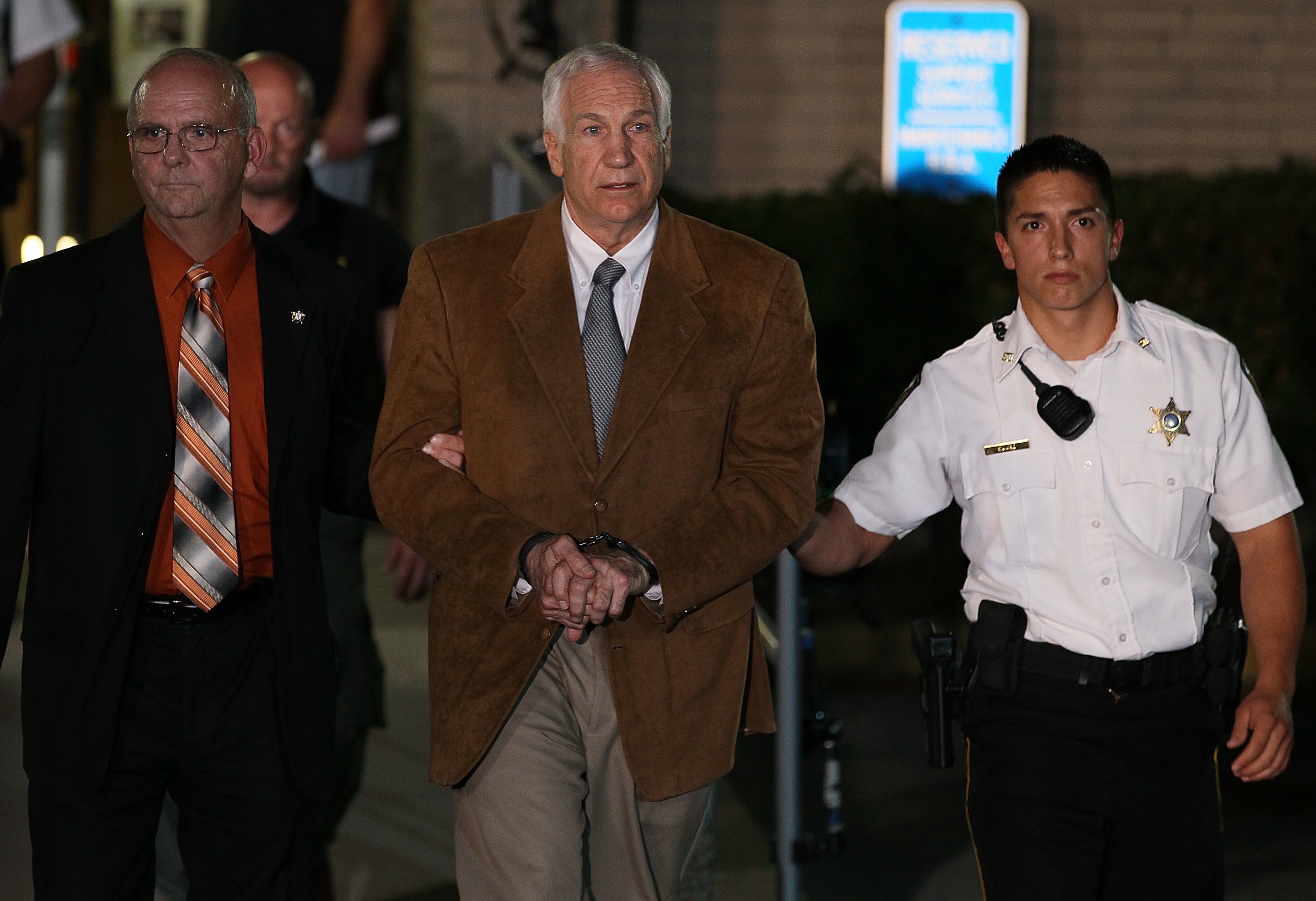 BELLEFONTE, Pa. (CBS/AP) —Jerry Sandusky showed little emotion as the jury in child sex abuse trial read the verdict finding him "guilty" on 45 counts and "not guilty" on three. The judge immediately revoked his bail and he was handcuffed and sent to the Centre County Correctional Facility.

"The Sandusky family is very disappointed obviously by the verdict of the jury but we respect their verdict, said defense attorney Joe Amendola. "We have some appeal issues, we'll pursue."

Word of a verdict broke at about 9:30 p.m. and a court official alerted the media it would be returned at about 9:50 p.m. The courtroom was closed by the time the jury and attorneys assembled for the verdict, and no one was be allowed to leave until court until it was adjourned, the judge said in a court order earlier in the week. The verdict was read count by count. Media was barred from transmitting any results of the verdict until adjournment, with the judge promising sanctions for any reporter or media organization violating his order and jurors did not grant any post-trial interviews.

After learning about the verdict, Penn State released a statement that read in part: "The legal process has spoken and we have tremendous respect for the men who came forward to tell their stories publicly. No verdict can undo the pain and suffering caused by Mr. Sandusky, but we do hope this judgment helps the victims and their families along their path to healing."

The Paterno family also responded to the outcome of the trial saying, "Although we understand the task of healing is just beginning, today's verdict is an important milestone. The community owes a measure of gratitude to the jurors for their diligent service. Our thoughts and prayers continue to be with the victims and their families."

Pennsylvania Governor Tom Corbett reacted by first thanking the jury for their willingness to serve on this case, and by saying: "I also want to commend the multiple victims in this case who had the courage to come forward and testify in court, confronting Sandusky, and proving beyond a reasonable doubt that he is guilty of these reprehensible crimes,'' Corbett said.

Earlier in the evening, Sandusky's lawyer said he would be shocked and "die of a heart attack" if the former Penn State assistant football coach were acquitted on all counts in his child sex abuse trial.

The candid remarks by Joe Amendola lasted about 15 minutes inside the courtroom and opened a wide window into Sandusky's state of mind as he and his wife, Dottie, waited for a verdict.

Amendola said the Sanduskys were spending a lot of time praying. He described the atmosphere at their home as like a funeral.

The couple was "crushed" Thursday when lawyers for one of their sons, Matt Sandusky, said the 33-year-old had been prepared to testify on behalf of prosecutors, Amendola said. Matt Sandusky said his father abused him, his attorneys said.

VIEW: Photos From Outside The Courthouse

Amendola said he wasn't surprised by another man, Travis Weaver, who claimed during an NBC interview Thursday that he was abused by Sandusky more than 100 times in the early 1990s, or by any others who might come forward.

"Money does a lot of bad things to people," he said.

As for Sandusky and his family, Amendola said he has given them an objective appraisal of what they could expect.

"I've used the best example I could use: climbing Mount Everest from the bottom of the mountain," he said. "It's a daunting, daunting case."

He also said that Sandusky had his wife talk to a criminal defense lawyer a couple months ago "just to be careful."

Amendola's interview ended when he was summoned into the chambers of Judge John Cleland, who presided over the two-week trial. Cleland has issued a gag order barring lawyers from discussing the case.

The verdict will impact not only Sandusky and the eight young men who accused him of molestation, but a range of civil and criminal probes of the scandal that shamed the university and brought down coach Joe Paterno.

Tim Curley, who temporarily stepped down as athletic director, and now-retired vice president Gary Schultz are charged with lying to a grand jury about what they knew of the 2001 assault that then-graduate assistant Mike McQueary said he witnessed.

Jurors took copious notes and appeared to pay close attention Friday as McQueary's two-hour testimony was read back to them. McQueary, who said he walked in on the assault, testified that he did not see penetration, but he did see a boy pressed up against a wall in the football team shower with Sandusky behind him.

Jurors also reheard the testimony of a McQueary family friend, Dr. Jonathan Dranov, who said that McQueary told him a different version of the story that didn't include sexual contact.

McQueary, however, also testified that he hadn't told Dranov everything that he saw.

The jury also sought details from the judge on charges connected to a boy known in court records as Victim 8. Cleland told the jurors in a brief courtroom meeting that they must be satisfied that there is other evidence that abuse occurred, not just statements from a janitor who relayed a co-worker's account.

On Friday, a judge in Harrisburg scheduled a July 11 status conference with lawyers for Curley and Schultz, who are also charged with failing to properly report suspected child abuse to authorities. They are fighting the charges and await trial.

Philadelphia attorney Fortunato Perri Jr., who has been following the Sandusky trial, said an acquittal of Sandusky on the counts involving Victim 2 could provide a road map for the defense of Curley and Schultz.

"You've now had a jury kind of preview your case with respect to the credibility of McQueary," Perri said. "Who knows if the next jury would believe him or not believe him? But you've got to feel pretty good if you're representing those two guys, and a jury has taken a good long look at McQueary's testimony and decided something didn't smell right about it."

Bruce Antkowiak, a former federal prosecutor and defense attorney who now teaches law at St. Vincent College near Latrobe, said the Sandusky jury's verdict on the charges involving Victim 2 is legally irrelevant to Curley and Schultz.

That's because, Antkowiak said, they are charged with violating a legal duty to properly report the allegation that Sandusky abused the boy — regardless of whether it was later proven.

"The underlying truth of what was going on in that shower doesn't affect their underlying obligation to report the initial allegation," Antkowiak said.

Defense lawyers for Curley and Schultz did not immediately respond to a request for comment Friday.

Sandusky has repeatedly denied the allegations against him. The defense portrayed him as the hapless victim of a conspiracy to convict him of heinous crimes. They explain the 48 charges against him as the result of an investigatory team out for blood and accusers who willingly played along in hopes of securing a big payday.

Even if he had been acquitted, Sandusky could face additional criminal charges involving accusers who came forward after his November arrest.

The attorney general's office has said repeatedly that it has an "active and ongoing" investigation of Sandusky, while federal prosecutors in Harrisburg issued a wide-ranging subpoena in February for university computer records and other information.

No sentencing date was set, but the judge scheduled an August 13th pre-sentencing hearing. His lawyers plan to ask on Monday that he be granted house arrest.

"The sentence that Jerry will receive will be a life sentence," said Amendola.

(TM and © Copyright 2012 CBS Radio Inc. and its relevant subsidiaries. CBS RADIO and EYE Logo TM and Copyright 2012 CBS Broadcasting Inc. Used under license. All Rights Reserved. This material may not be published, broadcast, rewritten or redistributed. The Associated Press contributed to this report.)