Even as Mayor Nutter made the rounds at schools to stress the importance of providing adequate funding for education, soda truck drivers circled City Hall, honking their horns, as a way of saying their jobs are in jeopardy from what Councilman Brian O'Neill calls the "1-for-2" sale because the per-ounce tax would nearly double the price of those beverages. 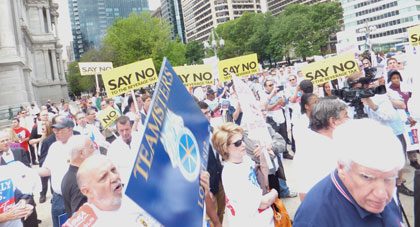 This is supposed to raise $60 million for the schools (see related story), but O'Neill says its real result would be "to drive people to the suburbs to buy their soda, and then all their groceries, more than likely at non-union stores, more than likely in stores that have never paid any taxes in Philadelphia."

Some in the crowd want more money for the schools, others say they don't deserve more without accountability and results.  But they were united that the soda tax is too bitter to swallow.

Former city controller Jonathan Saidel says he supports public education, but not by the sugary swig.

"So they want to find a tax for something they haven't taxed before, 'cause they can't tax the air or they'd tax the air," Saidel told the rally. "They ought to find out why the school district doesn't have money, fire those people responsible for the reason they don't have money, and fire everybody except the teachers."

Several other council members addressed the soda tax rally, an indication of how that body is split on school funding and taxes, with crunch time approaching.

A short distance away, at the District Headquarters, supporters of the soda tax proposal made sure their voices are also heard.

Volunteers and members of a not-for-profit organization, Education Voters of Pennsylvania held a phone bank to reach out to as many people as they can to urge the public to convince their council members to support the soda tax.

Mayor Nutter added, "This really shouldn't be that tough a decision."

Mayor Nutter spent the day visiting the five schools expected to bear the brunt of the cuts. At a time when thousands of teachers face losing their jobs, he says he is siding with the students and for the future of the city.

"No one wants to pay a little more, I don't want to ask for a little more but I think the cost of not having these kinds of programs and services is really astronomical," Nutter said.

The Council is scheduled to address these matters on Thursday.