The ultimate road trip for a sports fan is to visit every single MLB or NFL stadium in the country. While some can claim to have made this cross-country road trip, it may not be realistic for the average fan -- whether it's due to time, cost, interest or physical effort. One solution is to select a few stadiums that have legacies that are forever etched in time and feature some of the biggest cultural icons in the history of American sports. The following are five of the most famous stadiums in the country. 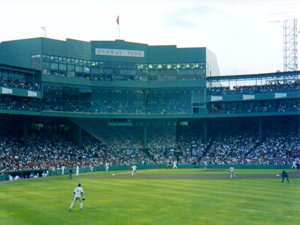 The Boston Red Sox have called Fenway Park home since 1912, making it the oldest ballpark in Major League Baseball. Located in the Kenmore district of one of the nation's oldest cities, Fenway Park is a must-see for baseball fans and considered to be a living museum of America's pastime, with the last remaining wooden seats in baseball located in the Grandstand section and the legendary left field wall, the Green Monster. Some of the biggest names in the history of the sport have played for the Boston Red Sox, including Babe Ruth, whose unpopular sale to the New York Yankees in 1918 started a 86-year World Series Championship drought known as the "Curse of Bambino."  Other significant players who wore Red Sox uniforms include Wade Boggs, Roger Clemens, Joe Cronin, Jimmy Foxx, Ted Williams and Carl Yastrzemski. But the most famous moment at Fenway Park occurred in Game 6 of the 1975 World Series, with the unforgettable image of Red Sox catcher Carlton Fisk waving the ball fair for a home run in the bottom of the 12th inning to beat the Cincinnati Reds.

Named after a legendary Green Bay Packers coach, Lambeau Field has been the scene of some of the most dramatic plays in NFL history. The field has often been described as the "Frozen Tundra," and a wildly popular touchdown celebration began at the stadium with the "Lombardi Leap." The Packers have won more NFL titles than any other team in history and are the only team to win three consecutive championships twice. The formal name of the Super Bowl trophy is the Vince Lombardi Trophy, named after another Packers legendary head coach who won five NFL championships in seven years, including the first two Super Bowls. The Packers are so popular in Green Bay that game days are compared to holidays, with most city businesses closed. The Packers' most memorable play and one of the most famous in NFL history was the "Ice Bowl" game, the 1967 NFL Championship where Bart Starr ran a quarterback sneak to score the winning touchdown in the waning minutes of the game. The Green Bay Packers have 21 players in the NFL Hall of Fame, most notably Forrest Greg, Don Hutson, Jim Taylor, Paul Hornung, Ray Nitschke, Bart Starr, James Lofton and Reggie White.

Known as the "World's Most Famous Arena" or simply "The Garden," the newest site to be called Madison Square Garden opened in 1968 not far from the Empire State Building and Times Square. It is the oldest arena in the National Hockey League (NHL),  second oldest in the National Basketball Association (NBA) and the third busiest music arena in the world. Several significant sporting events have been held at Madison Square Garden, most notably Game 7 of the 1970 NBA Finals, when injured star center Willis Reed played through pain to help the New York Knicks win their first NBA championship. Other historic events were world championship heavyweight fights featuring Rocky Marciano vs. Joe Louis in 1951, two of the Muhammad Ali vs. Joe Frazier fights, one dubbed as the "Fight of the Century," and the 1994 Stanley Cup. Some of the most memorable concerts were also held at Madison Square Garden, such as George Harrison's 1971 Concert for Bangladesh, Led Zeppelin's three shows with video footage that became the group's 1976 concert film "The Song Remains the Same" and John Lennon's final stage performance in 1974.

Opened in 1914 and the home of the Chicago Cubs since 1916, Wrigley Field is the second oldest ballpark in the MLB. Located on Chicago's North Side, the historic baseball stadium is well known for its ivy-covered outfield walls and rooftop seats across Waveland Avenue. One of the most memorable moments in all of baseball history occurred in Game 3 of the 1932 World Series, when Babe Ruth allegedly pointed to the center field bleachers before he hit a home run known as Babe Ruth's Called Shot. Many of the sport's legendary players played for the Cubs – Ernie Banks, affectionately known as "Mr. Cub", Gabby Hartnett, Ferguson Jenkins, Ryne Sandberg, Ron Santo, Billy Williams and Hack Wilson – but the team has the longest World Series-winning drought in baseball history, currently at 104 years. Wrigley Field is also well known for its former broadcaster, the late Harry Carey, and prominent in pop culture, with the stadium featured in film and television shows like the 1980 musical comedy "The Blues Brothers" and the 1986's "Ferris Bueller's Day Off".

Although the "new" Yankee Stadium opened in 2009, baseball fans will never forget the team's glorious past. No American sport franchise has won more world championships than the New York Yankees, and no MLB team has more retired uniform numbers or players in the Baseball Hall of Fame. Some of the most famous ballplayers in history have worn a Yankee uniform, including Babe Ruth, Lou Gehrig, Joe DiMaggio, Mickey Mantle, Yogi Berra, Bill Dickey, Thurman Munson, Don Mattingly and Derek Jeter. Many great moments occurred at the original stadium, such as Roger Maris breaking the single season home run record in 1961, Reggie Jackson's three consecutive home runs in the 1977 World Series, Don Larsen's perfect game in the 1956 World Series and Lou Gehrig's farewell speech on July 4, 1939. In the new Yankee Stadium, the championship tradition continued with the Yankees winning the 2009 World Series, and two years later, Derek Jeter became the first Yankee player ever to achieve 3,000 hits in a career on July 9, 2011.