DREXEL HILL, Pa. (CBS) -- Four people, including a 2-month-old baby girl, were on a medical helicopter when it crashed in Delaware County Tuesday afternoon. The chopper was heading to Children's Hospital of Philadelphia from Chambersburg, Pennsylvania, when it crashed near the Drexel Hill United Methodist Church, on the 600 block of Burmont Road, in Drexel Hill just before 1 p.m.

Officials say the crash was a miracle landing because the area in which the medical helicopter crashed is a heavily trafficked area and no one outside of the chopper was injured.

All four occupants aboard the chopper were able to self extricate with non-life-threatening injuries. 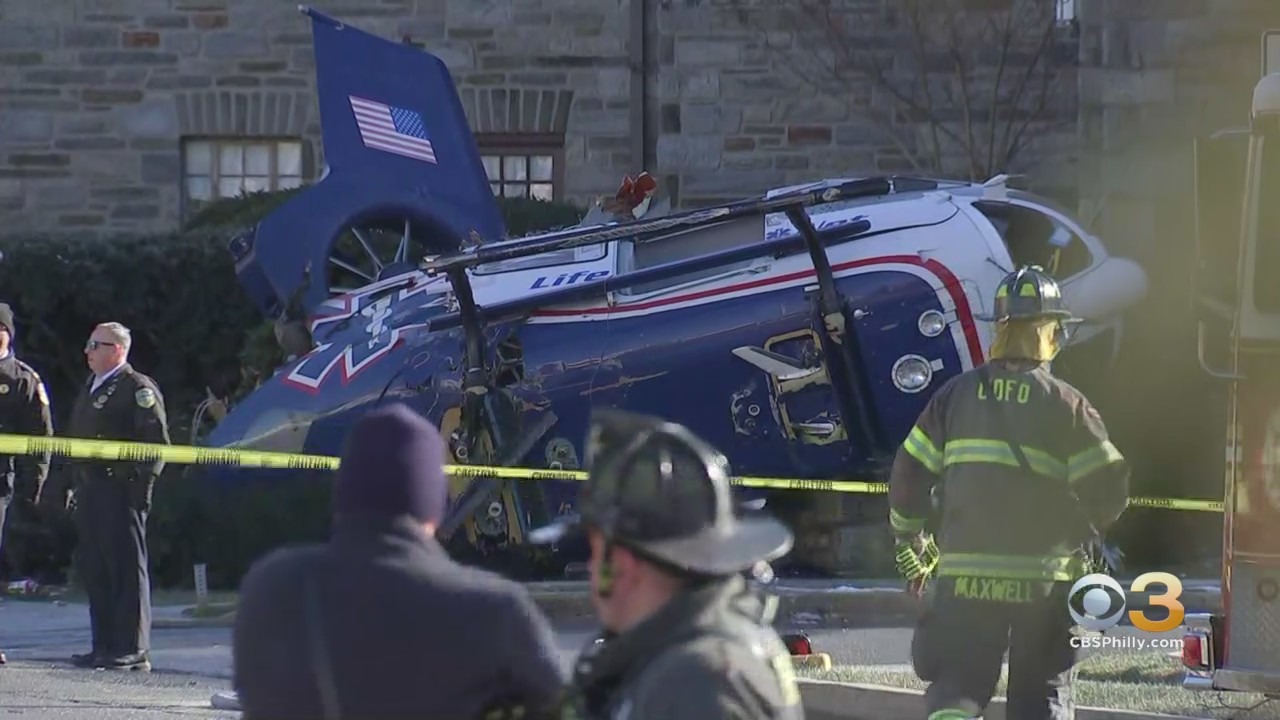 Eyewitness News has learned that all four people on board the chopper have survived and the pilot suffered the most serious injuries. Officials say all four are in stable condition.

"Around 1 o'clock, we started to receive 911 calls for a helicopter in distress. Officers and the fire department responded to the area and they located this helicopter behind us, which had crashed in behind the building," Upper Darby Police Superintendent Timothy Bernhardt said. "What we know is that there were four members on the helicopter -- three of them were crew, pilot, one of them was an infant. They were en route to CHOP, Children's Hospital of Philadelphia. As of right now, no non-life-threatening injuries. The child has been transported to CHOP and the other two are at local hospitals."

Bernhardt said they initially received reports the helicopter started to experience malfunctions on Route 1. Investigators are still trying to determine why the chopper was in distress.

"From all accounts, what the pilot was able to do is amazing," Dr. Monica Taylor, chair of Delaware County Council, said. "Our reports indicate he first started to experience trouble on Route 1 and was looking for somewhere to land and was able to bring it down Burmont, land here, and as you can see from the scene, there aren't even poles down."

"It's really a testament to the pilot and what he was able to do in keeping everyone safe," Taylor added. "It's amazing, it's a miracle that there are no major injuries that occurred from this accident."

Bernhardt said his "heart just dropped" when he first heard reports coming in.

"I was back at police headquarters. We heard the call come out, the first call I said, 'no way,' and then the second, then the third. I knew there was a problem," he said. "My heart just dropped. It's a true miracle that everyone was out and they were out prior to us getting here."

Approximately 30 firefighters and seven medic units were on the scene.

"Obviously, this pilot had a great command of the helicopter and was able to land it safely, took the best interest of the community in hand," Upper Darby Fire Chief Derrick Sawyer said. "This was a miracle in the works where there were no lives lost and no property damaged."

A witness says first responders arrived at the scene quickly. He told Eyewitness News he walked outside with his neighbor and responders were almost there instantly.

"They were on the scene really quick, the initial sound alerted me and my dog as I was getting shoes on I already heard sirens going down the street," he said.

"The initial contact with the ground was a boom, like something metal falling out of the sky," Jerrell Saunders said.

Eyewitness video shows smoke billowing from the aircraft. The fire chief says there was about an hour's worth of fuel still left.

"Jet fuel was just pouring out of it," said Lisa Smith, a witness. "I believe it was the pilot who was actually pulling people out."

Neighbors and passersby rushed toward the scene to help. This photo shows a woman rushing that infant away from the wreckage.

"They were so brave," Iris DiBernardo said. "People were just running up there."

One family that was out running errands told Eyewitness news they were right next to Drexel Hill United Methodist Church when they saw the medical chopper descending. At first, they thought it was a bit close and then realized it was headed straight toward them.

They managed to get out of harm's way, and although there was a lot of debris on their windshield from the heavy wind and crash, no one inside their car was hurt. They were quite shaken up and say they're grateful to have escaped death.

"I was actually frozen for a second when that happened because I was just looking at a helicopter," Joshua James, of Lansdowne, said. "It's no way to explain it. It almost feels like something from Game of Thrones, you see a dragon coming at your car because it was literally in the sky, a huge object coming toward you. It was insane."

The National Transportation Safety Board is going to determine the cause of the crash.

"The EC 135 aircraft in question was from the LifeNet program, based out of Hagerstown, Maryland. There were no fatalities associated with this accident and the patient and crew are receiving medical evaluation. The FAA and NTSB have been made aware of this incident and investigators are en route to assess the situation," Doug Flanders, vice president of communications for Air Methods, said in a statement. "Our team will cooperate fully with their efforts to assess the cause of this unfortunate accident. Privacy rights with regards to those on board the aircraft will be honored, and we will not be sharing any additional information."