DOWNINGTOWN (CBS) -- Back in November when the leaves start to fall and people start looking forward to Thanksgiving, Sean Mulcahy was recovering from surgery. Doctors removed two-thirds of his liver and gallbladder, then began work on the peritoneal lesions scattered all over his abdomen.

Ten months prior Mulcahy, a native of Southern Jersey, had been diagnosed with stage IV colon cancer at age 43.

Around that time Megan Brideau was planning for college. A senior at Downingtown East, her high school years had proved challenging after losing her father to kidney cancer when she was just 16.

More than a year later, Mulcahy and Brideau are beating cancer in their own way, in part because of their amazing support system—Team CMMD.

"Everybody had a cancer story and there was so many people that were just in an emotional rut just like I was," said Team CMMD founder, Christine Meyer, explaining how a running group of just four people grew to over 1,500 in a few short years.

It started in 2012 with a single text sent to three friends.

"Do you want to run Broad Street with me?"

That year had been rough on Meyer. The young doctor felt as if cancer was at her heels. Her Exton-based practice was having a run of young cancer patients. Men and women that she had seen for years were now getting out-of-the-blue diagnoses and some were sadly losing their battles. The same year, Meyer's aunt—the woman who had inspired her to become a doctor—was diagnosed with stage III colon cancer.

"It was totally out of my control which is not a place I am used to being," said Meyer. "Usually it's 'okay here's your diagnosis…here's your treatment…I can fix this.'"

The young internist had hit rock bottom. She sunk into a months-long depression until New Year's Eve when she came across a link for the Broad Street Run.

That first year Team CMMD managed to beat their initial $2,000 fundraising goal by $65,000. If they meet their 2016 goal by Sunday's race, they will have raised a collective $800,000 for the American Cancer Society.

There's more to the group than running Broad Street though. Every Sunday morning, members of Team CMMD run together for someone battling cancer.

"At my lowest point this group of runners got together and did a dedication run for me," said Mulcahy. "Wow, here's 70 or 80 people out running for me. They didn't really know me; didn't really know my story prior to Christine telling them, but it was one of the things that helped me get through a difficult time in my life." 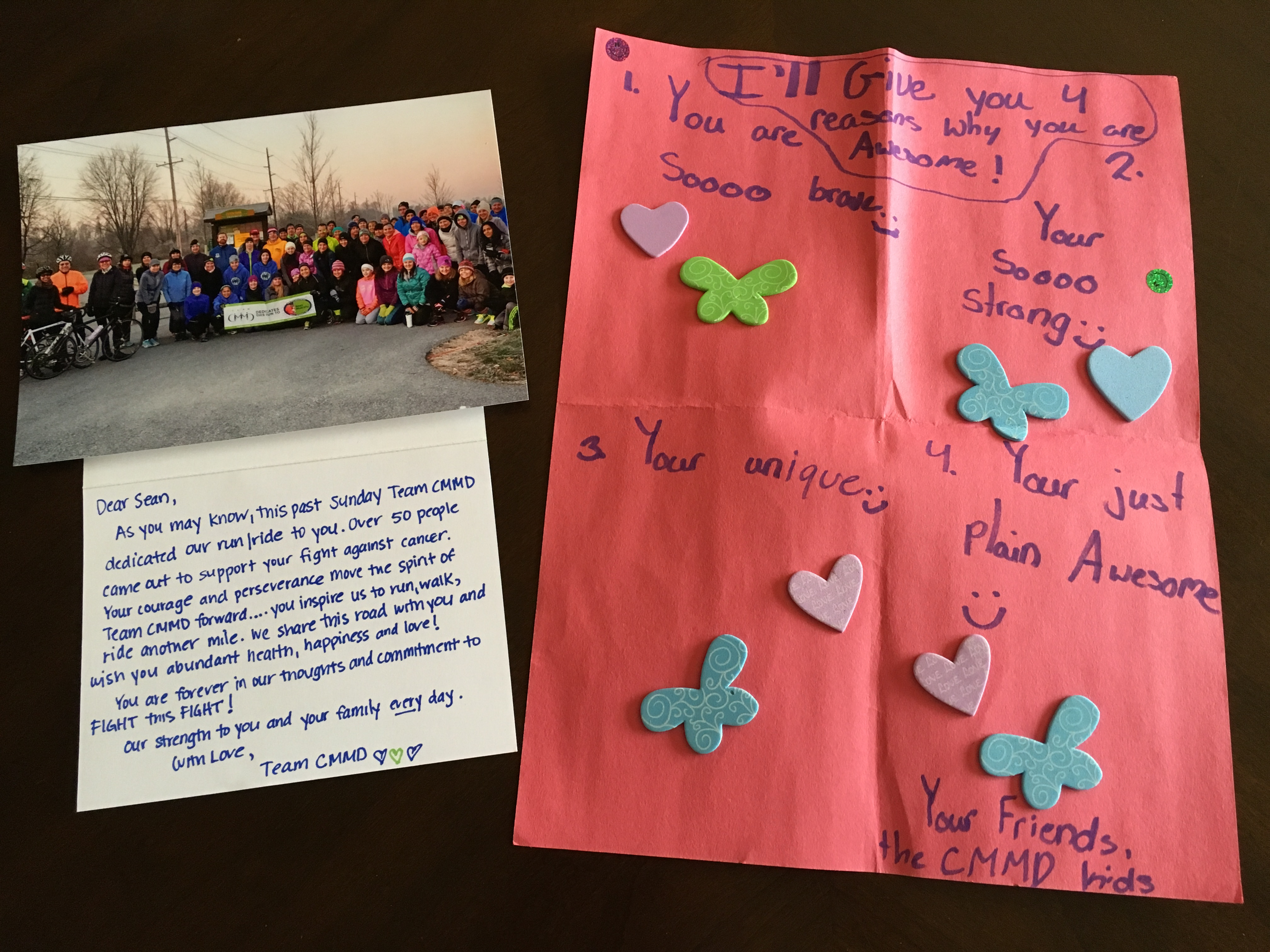 After the run they send a care package. Mulcahy's included a picture of the runners as well as a photo of him and his daughter, Sarah, and a Team CMMD blanket.

"I use the thing just about every night," noted Mulcahy. "My wife jokes that it's my kryptonite because within three minutes of laying down on the couch—boom—I'm asleep."

Team CMMD also just finished up their first official year as a 501 c3 charity. When they're not raising money for Broad Street they're raising money to go towards helping families affected by cancer like the Brideau's.

"I lost one of the biggest support systems I could ever ask for in my dad, and although no one could ever replace that, knowing that CMMD is rooting for me really helps me get through the tough days," said Brideau, who was granted a $20,000 college scholarship by CMMD last year based on an essay about her dad.

"I know that [he] would be happy to see something good come out of his death and it is really important to me that he could be, in some way, a part of my college life."

This year, Team CMMD will be giving out two $20,000 scholarships to local seniors out of the $300,000 raised by the group in 2015. It's money raised through their annual Food Fight competition, sponsored races and donations.

Team CMMD likes to keep busy—especially Christine who recently published a book about her journey called The Longest Mile.

"There are things in there that are a little embarrassing for me but I think it's a story that everybody can connect with because it's not a preachy 'I'm a doctor writing a book kind of story,' it's a 'I'm a human being that has major fails and embarrassments' and yet the ending is so happy," said Meyer.

"What running now has done is I have this huge community of people that were not in my life before. And they're all of these amazing humans that we have nothing in common really but this team and our running group."