PHILADELPHIA (CBS) -- There are new concerns about a COVID-19 surge in Philadelphia from the White House Response Team. The expected hot spot status has more resources being directed into our area, according to Pennsylvania Gov. Tom Wolf.

But nationally, new projections indicate the curve of new cases might be improving.

New modeling says things might not be as dire as initially feared nationwide and the situation in Philadelphia is a little better. But the city is expected to reach its peak early next week, and that's getting attention from the White House.

Philadelphia is being called a coronavirus hot spot by Dr. Deborah Birx, the administration's response director. She said the White House was concerned about certain metro areas, naming Washington, D.C., Baltimore and Philadelphia.

"I don't know exactly what numbers she's looking at, and I doubt she's looking at numbers as updated as we are," Philadelphia Health Commissioner Dr. Thomas Farley said. "I'm glad she's concerned about Philadelphia. We haven't been hit hard so far, but at the moment, things are looking a little bit better."

The White House has not clarified its hot spot designation.

"My staff talks to people from the CDC routinely, I think probably every day. There wasn't any conversation where we were singled out over any other city," Farley said.

Dr. Birx said, nationally, there's been a flattening of the curve for new cases.

Five weeks ago, there were nine deaths, followed by a dramatic increase.

Now, social distancing appears to be making an impact. Overnight, the Institute for Health Metrics lowered its death projection to 60,415. The day before it had been 82,000. 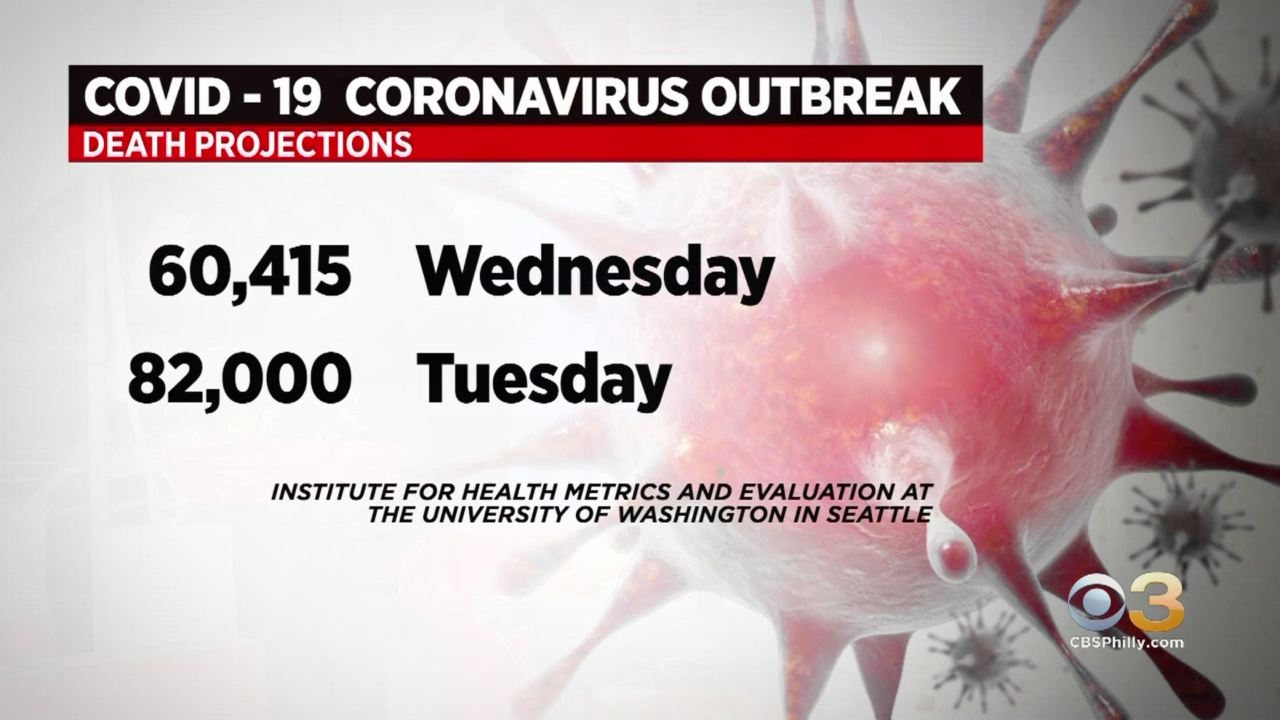 "Even though the curve may begin to look like this, it's still going up," New Jersey Gov. Phil Murphy said. "I hate to say it, it's still up and secondly, while it may be flattening, beginning to flatten, the fatalities are going up and, sadly, will continue to go up."

Institute for Health Metrics has these projections for the peak of hospital resources in our region:

Wolf says because of an expected surge in the region, Vice President Mike Pence told him more resources would be coming into the area.

"While it's not good that Philadelphia and the southeastern part of the state is seen as a hot spot, it is going to be helpful in terms of getting more federal resources and that's a good thing," Wolf said.

CORONAVIRUS LATEST: WHAT YOU NEED TO KNOW

"An area of particular concern we were briefed on this morning is the city of Philadelphia," Pence said. "Our message to the people of the Philadelphia area is now more than ever, practice social distancing."

The governor didn't provide any specifics on what federal resources were being directed into our area or when. The most serious COVID-19 cases continue to be among the elderly and people with preexisting conditions.

CBS3's Stephanie Stahl and Greg Argos contributed to this report.