BOSTON (CBS) -- Due to his unceremonious departure from the Bruins, a bizarre series of events documented by Facebook posts on topics ranging from hockey to fast food companies to his personal thoughts on an overbearing American government, the legacy of Tim Thomas in Boston is indisputably muddled.

However, when it comes to hockey memories, nothing could ever erase Thomas' performance from the 2011 postseason, considered to be among the finest playoff showings by a goaltender in hockey history.

Thomas' successor, Tuukka Rask, is currently on pace to be even better in 2013 than Thomas was two years ago. While Rask has been truly outstanding in his own right, Bruins head coach Claude Julien was quick to give a nod to Thomas for leading by example and showing Rask what it takes to lead a team in the playoffs.

"Timmy did it for us for numerous years. To a certain extent, you've got to hope that Tuukka learned from that as well and seized the moment when he had the chance," Julien said of Rask, who watched Thomas' 2011 postseason from the bench. "Although they're different personalities -- both have good personalities, don't get me wrong, but different personalities -- I think a lot of Timmy's commitment and desire to be the best he could be every night has rubbed off on Tuukka. Tuukka has learned from that."

From CBS Chicago: Who Will Win The Cup?

Julien also recognized the difficulty for a team to make it this far without a goaltender playing the way Rask has for the past month.

"Right now, he's in a zone that you hope he can hold on to," Julien said. " Without that kind of goaltending, you don't get a chance at winning a Cup."

While Rask still needs to win four more games before winning the Cup, he has posted better numbers than Thomas to this point. Through 16 games, Rask has posted a 12-4 record along with a .943 save percentage and 1.75 goals-against average. Thomas went 11-5 with a .931 save percentage and 2.27 GAA in his first 16 postseason games in 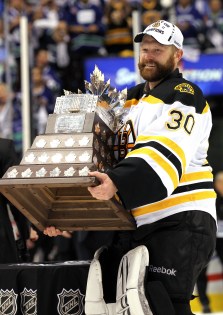 2011. Thomas finished that campaign with a 16-9 record (including four shutouts), .940 save percentage and 1.98 GAA, good enough to win the Conn Smythe Trophy.

Rask has his work cut out for him to get a hint of what that feels like, but after limiting the Penguins -- who finished first in the NHL in goals per game this season -- to just two goals in more than 275 minutes in the conference finals, there's good reason to believe he can get it done.

Pick-A-Side: Who Has The Better Goaltender?

Even opposing coach Dan Bylsma made the case for Rask as the MVP.

"There's no question that the performance he put in in this series was elite," Bylsma said of the man who held Sidney Crosby, Evgeni Malkin and Jarome Iginla to zero points in the conference finals. " He was the difference in the series, there is no question."

To be sure, the 26-year-old Rask deserves all the credit for the brilliance he's displayed through the first three rounds of the postseason. Still, for helping to show him the way, Thomas -- from wherever he may be watching this postseason -- deserves an assist.

Read more from Michael by clicking here, or find him on Twitter @michaelFhurley.