NORRISTOWN, Pa. (CBS/AP) -- Bill Cosby learned his fate inside a Montgomery County courtroom on Tuesday. The 81-year-old actor and comedian has been sentenced to three to 10 years in state prison for sexually assaulting a former Temple University employee at his home in 2004.

Judge Steven O'Neill handed down a sentence of no less than three years and no more than 10 behind bars.

O'Neill also ruled Cosby as a "sexually violent predator." The classification means that Cosby must undergo lifetime counseling and report quarterly to authorities. His name will appear on a sex-offender registry sent to neighbors, schools and victims.

Cosby's lawyer argued for bail after the ruling, but O'Neill pushed back, and said Cosby will not be getting bail.

"I've imposed sentencing at this stage," said O'Neill. "If you want to take it up with another court, you can."

Andrea Constand's Impact Statement: Bill Cosby 'Robbed Me Of My Health And Vitality'

Cosby's lawyers had fought the "sexually violent predator" designation, arguing that Pennsylvania's sex-offender law is unconstitutional and that he is no threat to the public at his age. But O'Neill said prosecutors had met their burden of proof by "clear and convincing" evidence. 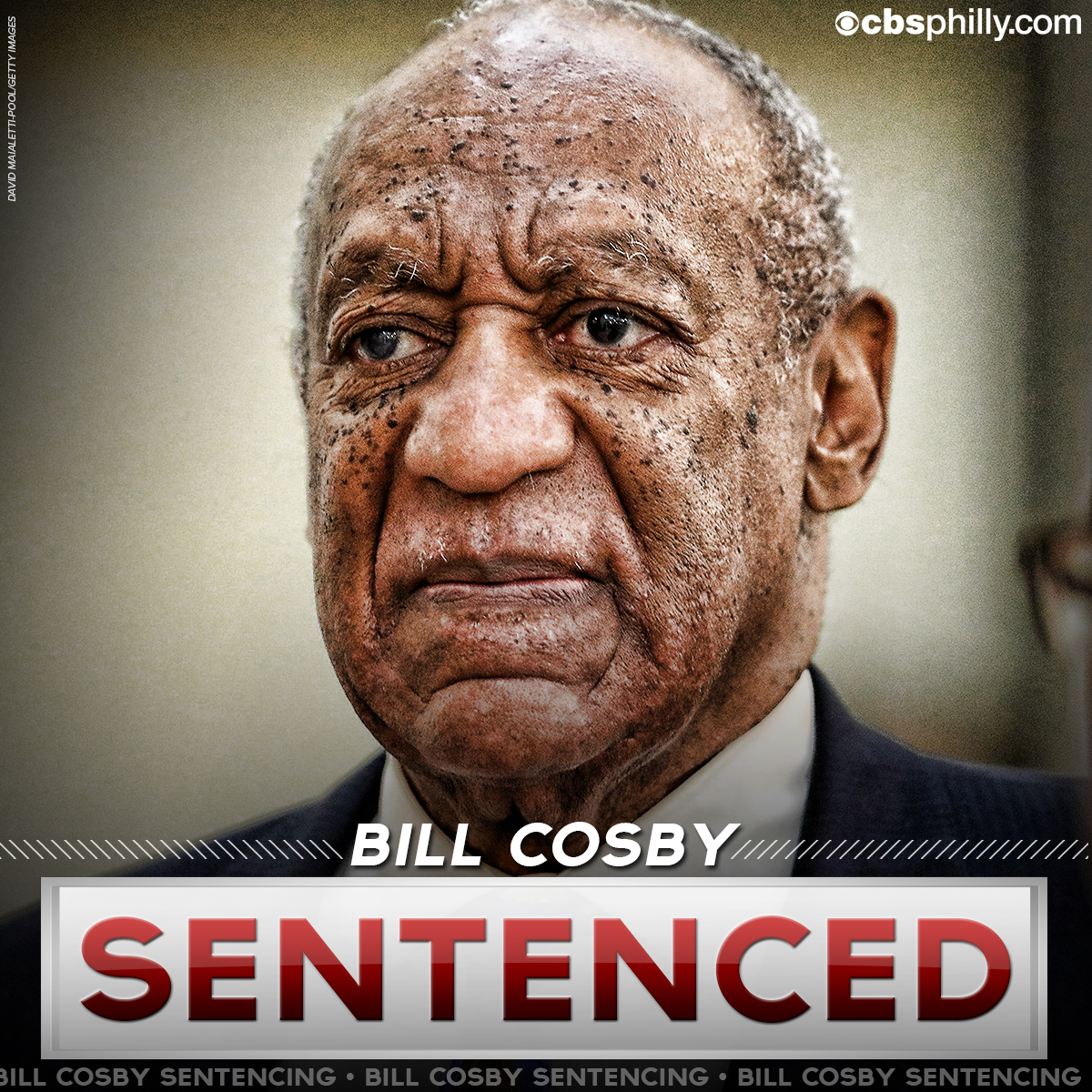 Cosby left the Montgomery County courthouse in handcuffs following the sentencing. Cosby will be going to SCI Phoenix for diagnostic and intake.

"This has been the most racist and sexist trial in the history of the United States. Dr. Cosby has been one of the greatest civil rights leaders in the United States over the last 50 years. He has also been one of the greatest educators of men and boys over the last 50 years. This is not pointed out to the jury or allowed in court because the racist and sexist mass media was attacking and denouncing Dr. Cosby whenever his lawyers even hinted there was racist and sexism present," said Wyatt.

He continued, "All three of the psychologists who testified against Dr. Cosby were white women who make money off of accusing black men of being sexual predators. It is no accident that prosecutor still works so close with anti-black and anti-male activist groups who tried to extort $100 million from Dr. Cosby in 2014 and continues to produce racist and sexist publicity against him through the 35 clients.

"They persecuted Jesus and look what happened."

"What is going in Washington today with Judge Kavanaugh is part of the sex war that Judge O'Neill along with his wife are part of," said Wyatt.

Steele said "justice has been served" following the prison sentence.

"For decades the defendant has been able to hide his true self and hide his crimes using his fame and fortune," said Steele, adding, "Finally, Bill Cosby has been unmasked and we have seen the real man before he heads off to prison."

"We're glad that judgement day has finally come for Mr. Cosby. Mr. Cosby has shown no remorse, and there has been no justice for many of the accusers who were barred from a court by the arbitrary time limit imposed by the statute of limitations, but many of them were brave enough to speak to law enforcement and some of them were chosen to testify as prior bad act witnesses," said Allred.

Cosby was found guilty in April on three counts of aggravated indecent assault. Jurors convicted Cosby of sexually assaulting Andrea Constand without consent, while she was impaired and after incapacitating her.

More than 60 other women accused Cosby of sexual misconduct during his 50-year show business career. O'Neill allowed five of them to testify at trial, while others came to watch the court proceedings. Steele wanted some of them to speak at the sentencing, but O'Neill ruled out the testimony of most of the other accusers, other than the five trial witnesses.

Days before the sentencing, Cosby's lawyers wanted O'Neill to step down from the case because of what Cosby's team called a long-ago grudge with a pretrial witness. Last week, Cosby's wife, Camille Cosby, filed a state ethics complaint this week accusing O'Neill of bias against her husband because of what she called his feud with a former prosecutor who testified in an early 2016 pretrial hearing. O'Neill had competed against the witness, Bruce Castor, for a political post years ago.

Cosby had been on house arrest since the verdict.

Constand said in a statement submitted to the court and released Tuesday that she has had to cope with years of anxiety and self-doubt that have left her "stuck in a holding pattern."

Constand, 45, said her training as a professional basketball player had led her to think she could handle anything, but "life as I knew it" ended on the night that Cosby knocked her out with pills and violated her.

Constand said she now lives alone with her two dogs and has trouble trusting people.

"When the sexual assault happened, I was a young woman brimming with confidence and looking forward to a future bright with possibilities," she wrote in her five-page statement.

"Now, almost 15 years later, I'm a middle-aged woman who's been stuck in a holding pattern for most of her adult life, unable to heal fully or to move forward."

She also wrote: "We may never know the full extent of his double life as a sexual predator but his decades-long reign of terror as a serial rapist is over."

Tuesday's sentencing was a reckoning accusers and prosecutors said was decades in the making.

"The victims cannot be un-raped. Unfortunately, all we can do is hold the perpetrator accountable," said Gianna Constand, the victim's mother, who testified Monday that her daughter's buoyant personality was forever changed after the attack.

The hearing concluded Tuesday after testimony from a defense psychologist who says Cosby is no longer a danger, given his age, and should not be branded a "sexually violent predator." On Monday, Kristen Dudley, a psychologist for the state of Pennsylvania, testified that Cosby fits the criteria for a sexually violent predator, showing signs of a mental disorder that involves an uncontrollable urge to have nonconsensual sex with young women.

Steele said Cosby would no doubt commit similar crimes if given the chance, warning that the former TV star seemingly gets a sexual thrill out of slipping women drugs and assaulting them.

"To say that he's too old to do that — to say that he should get a pass, because it's taken this long to catch up to what he's done?" Steele said, his voice rising. "What they're asking for is a 'get out of jail free' card."

Cosby's side didn't call any character witnesses, and his wife of 54 years, Camille, was not in court.

Cosby became the first black actor to star in a prime-time TV show, "I Spy," in 1965. He remained a Hollywood A-lister for much of the next half-century.

The proceedings took place as another extraordinary #MeToo drama continued to unfold on Capitol Hill, where Supreme Court nominee Brett Kavanaugh faces allegations of sexual misconduct from more than three decades ago.