Barbara King's not "the Martha Stewart of the Main Line" for no reason: the Valley Forge Flowers owner is set to branch out.

Barbara King's verdant floral business, Valley Forge Flowers, is expanding to include home furnishings thanks to a new addition, The Barn.

Start a conversation with Valley Forge Flowers maven and QVC garden expert Barbara King and her profound love of her craft is instantly as bright and abundant as a field of tulips after a long, wet spring. "It's pretty darn wonderful what I do," she says. "Flowers just make people so happy. You get to be a part of people's lives, get inside their heads, and pull out their imaginations. I love to figure out what people are thinking and make it come alive."

A third-generation florist, King has green blood in her veins. Her grandfather was a florist in New York City and her father, too, caught the blooming bug, not only adorning Jackie O's apartment with her favorite geraniums, but also opening Valley Forge Flowers back in the '60s, when King was a mere sprout. "I really grew up in a typical mom-and-pop shop," she reflects. 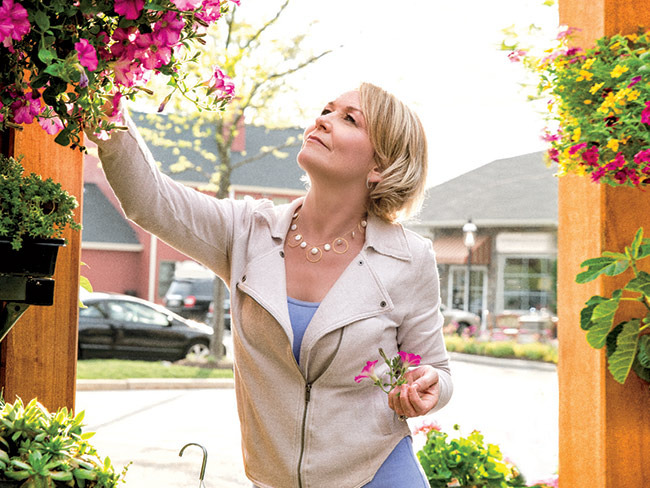 King is a meticulous caretaker of dozens of distinct floral species.

Along the way, King was mentored by not only her father (who still works for VFF), but also by the folks at Robertson's Flowers & Events and Campbell's Soup scion, philanthropist, and world-renowned horticulture aficionado Dorrance "Dodo" Hamilton. "Meeting Dodo was the best meeting of my life. I was 18, going to Villanova at night, and she wanted a full-time florist for her house. I thought, Who the heck wants a full-time florist?" King laughs. "So Dodo said, 'How about you come to my house two days a week, and when I have parties we'll go through your father's flower shop?' Without my first job of doing a giant tent party for her, I wouldn't have had the opportunity for so many people to see my work, which really opened up so many doors for people to try out Valley Forge Flowers."

Through her 30-odd years in the business, King has taken the mom-and-pop flower shop to new heights, helping Valley Forge Flowers become one of the area's most-renowned florists—winning Best in Show ribbons at the Philadelphia and Newport Flower Shows and decorating the Academy Ball for eight years running. In addition to a newly opened store in Bridgeport, she recently broke ground on a major revamp of the Wayne location, including a brand-new adjacent space called The Barn, which will house all of the essentials for alfresco living. With a total of 14,000 square feet including an expansive café, King calls it the "store of my dreams." 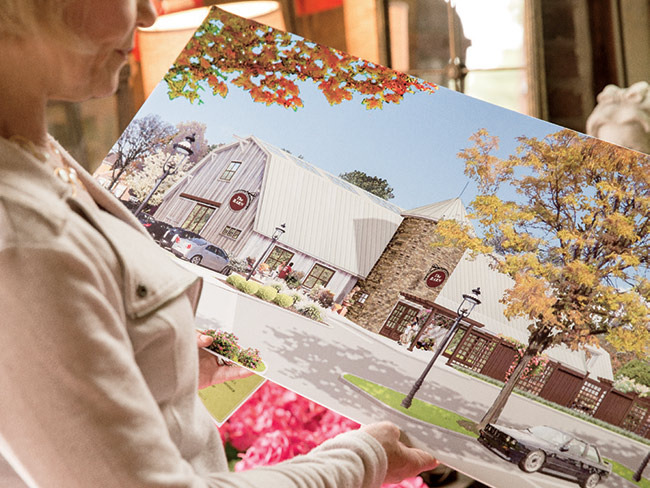 King examines a rendering for her new store, The Barn, in Wayne, which sells outdoor living essentials.

King's influence has taken root well beyond the Main Line; she's also QVC's guru of all things gardening. Just like at the start of her career, the opportunity arose from a combination of happenstance and commitment. "There was a party at the Bellevue, and the last thing I wanted to do that night was decorate a party," says King, recalling how her relationship with QVC began. "But we went, and after decorating, we sat at a table where we knew no one. The gentleman sitting next to me was a buyer for QVC and said, 'I'm looking for someone to sell garden products on QVC. Would you be up for it?' That was 15 years ago."

Since then, King has curated collections of some of her favorite gardening products from around the world. In 2011, she started designing her own upscale, on-trend products like lounge chairs and patio mats for the eponymous QVC Barbara King Home and Garden line, and earlier this year she became the brand's face of gardening. "I now run its blog, and it's just a whole other world for me. I didn't even know what a blog was," she laughs. "It makes my brain explode trying to come up with what's going to be out there for next year, and even the following year."

Beyond her ever-blooming businesses, King is just happy to keep her life in bloom with husband Joe, a horticulturist, and her two sons. "They grew up like me, napping in flower boxes. They love the energy of it," she says. "When I walk into a flower shop, those olfactory senses kick in and I'm like, 'This is what Grandpa's flower shop smelled like,' and same with my dad's. Now they'll think the same of mine." 503 W. Lancaster Ave., Wayne, 610-687-5566