BENSALEM, Pa. (CBS) -- Several multi-vehicles crashes, involving as many as 100 cars and dozens of tractor-trailers stretched over several miles of icy highway, shut down the Pennsylvania Turnpike for most of the day today between Willow Grove and Bensalem, Pa. 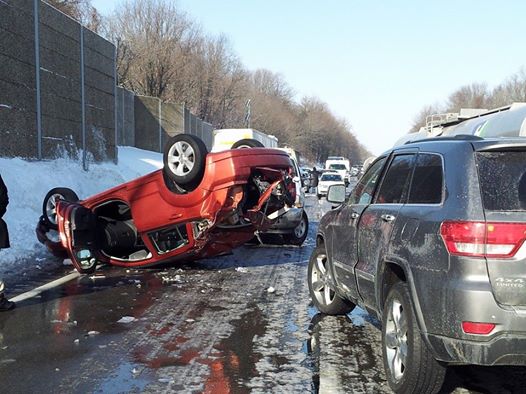 One crash area involved approximately 75 cars and several tractor-trailers in the eastbound lanes of the highway.  The westbound lanes were closed to allow access by emergency vehicles.

According to the Pennsylvania Turnpike Commission, 30 people were injured and transported to local hospitals. Doylestown Hospital confirmed it was treating one victim who was in stable condition, while Abington was reportedly treating 16 people. St. Mary's Medical Center, in Langhorne, was treating seven and Temple University Hospital was treating one.  CBS 3 is told five of the injuries are classified as serious, but none are considered life-threatening.

Dr. John Kelly, chief of staff at Abington, says the good news is none of the injuries are serious.

"The word that we have is that we may have seen the most severely injured at this point in time, which we're pleased to say did not include any life-threatening injuries that we are aware of."

Kelly explained what kind of injuries they were seeing, "In a blunt trauma situation, you're going to have a lot of soft tissue and bone type injuries.  I'm unaware of any fractures to date.   We did have one patient who had a closed- head injury but appears to be recovering well from that." 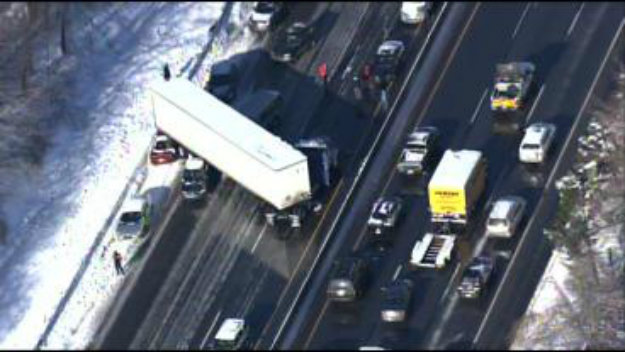 The incident began about 8:30am in the eastbound lanes between Willow Grove and the Route 1 exits in Bensalem, Pa.

Another crash happened closer to the Route 1 exit.  That accident area involved approximately 30 cars and included a jackknifed tractor-trailer. 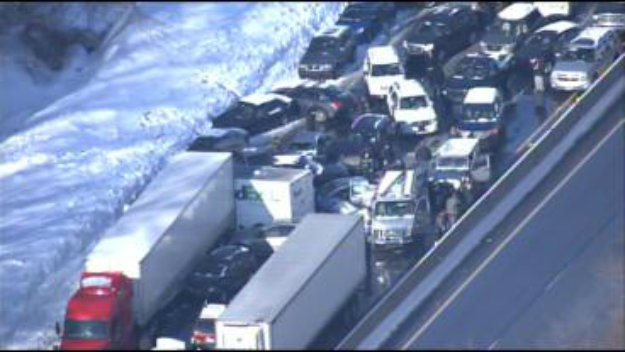 Chopper 3 was over the scene where it appeared at least four cars were stuck under the jackknifed tractor-trailer.

"We believe that it looks like at this point that the initial incident involved several tractor-trailer trucks. There have been reports of three to four. State police are working through sorting all that out right now," Carl DeFebo of the Pa. Turnpike Commission said.

"Scared to death, just thinking that it wasn't going to stop," remembered Kate Garwood. "You kinda think you're going to continue to get hit."

"I was able to get off to the shoulder," said Terry Foley, who drives the route to work every day. "I didn't hit the car in front of me. I said, 'I survived,' and then somebody comes flying in the back of me."

CBS 3 traffic reporter Bob Kelly called this "the worst accident I have seen in the 20 years I have been doing this."

The Pa. Turnpike Commission reported around 3:30 p.m. that the tractor-trailer blocking all eastbound lanes was moved to allow trapped backlog to get past the scene in the left lane to continue eastbound on I-276.  Disabled commercial vehicles remained, but all passenger vehicles in the backlog had been removed.

Other crews were removing small portions of the concrete median, to allow drivers trapped on the eastbound turnpike to U-turn onto the westbound lanes (which were also shut down to all but emergency vehicles) and get off the turnpike.

The turnpike was reopened to traffic just before 4pm -- about 7½ hours after the first crash occurred.

Investigators indicate icy conditions and sun glare are being blamed as likely culprits in causing the pileup.

One driver said that road spray on windshields plus the sun low in the sky may have hindered visibility as drivers found themselves suddenly upon a stopped vehicle ahead with insufficient room to stop on the slick pavement.

A total of 75 cars and trucks, including six tractor trailers, were taken to Rob Liepziger's tow yard in Bristol, Bucks County alone. Many of them have front-end damage, back-end damage and a lot of the vehicles have been totaled.

Rob's been in the towing business for more than 30 years.

"I haven't seen anything like this in forever that I've been out here," Liepziger said.