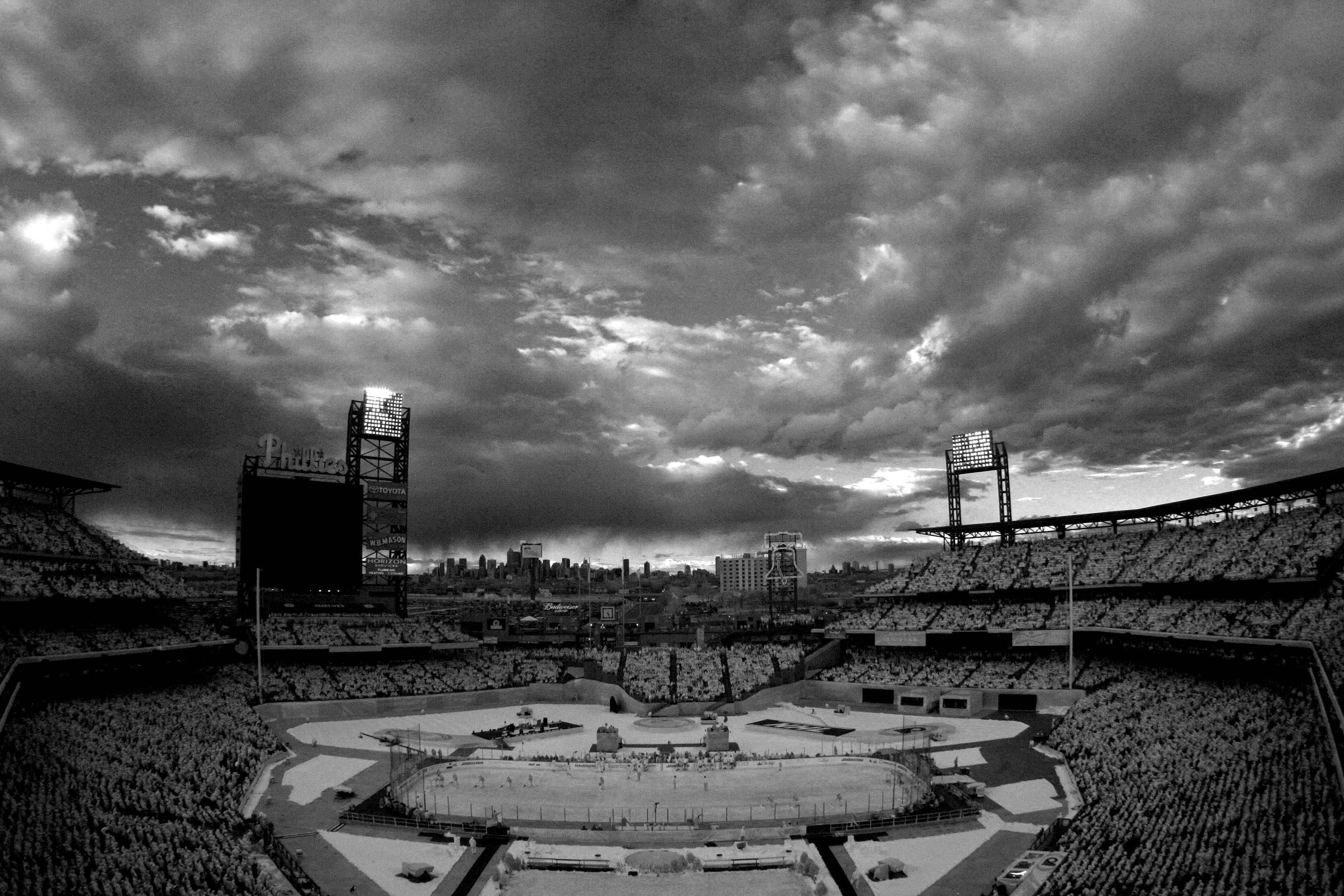 The highlight of the season was the Winter Classic, especially the Flyers' Alumni Game that was presented at Citizens Bank Park. It had all the trappings of good competition and marvelous theater – an unbeatable combination anytime.

Who wouldn't pay at whatever cost to see Bernie Parent, now 66 years of age, in the net again? As they said then, "Only the Lord saved more than Bernie Parent" in 1974 and 1975 when the Flyers were winning those Stanley Cups. A lot of people paid this time. Some 46,000. A capacity house.

Memories are such precious things at any price. And Bernie and Bobby Clarke, Reggie Leach, John LeClair, and certainly Eric Lindros and Mark Howe had a ton of them from the days of winning when you could get to the game for less than half a buck for a gallon of gas. It just seemed that life was simpler then. The living was easier. It probably really wasn't, but a lot of folks there thought it was – and there were enough to attract them to outdoor hockey in a baseball park.

Baseball and football players get to experience playing their games before big crowds, 40 and 50,000 every week. But it's a different thing in hockey. And that was the thinking behind the Winter Classic.

Bringing the Flyers in from the 70's was a stroke of genius. They were greeted with loud cheers and, I wager, a few tears too from a crowd that had to contain more than a few spectators who hadn't even been born when these guys were playing. But their dads and granddads had talked about them and the kids from the 70's came to play the game as well.

When Parent blocked those first few shots, they went bananas. When a Lindros picture appeared on the boom screen prior to the game, they roared lustily.

Penalty shots were awarded instead of penalties. In fact, Mark Howe, who was recently inducted into the Hockey Hall of Fame, converted a penalty shot for a score and the crowd responded. It was Howe who had suggested that somewhere in the program they remember Brad McCrimmon, another Flyer from yesteryear, who was killed last September in a plane crash in Russia. And again, the crowd responded.

Bobby Clarke, who captained the Stanley Cup winners, served as former general manager and is now Senior Vice President of the team, said that of all the good things that have happened to him in hockey, this event ranked very high. Clarke called the Alumni Game not just a tribute to hockey but a tribute to Philadelphia.

Lindros, at age 38 a comparative kid with this crowd, reveled in the experience and the surroundings. Eric played here for six years, was a six-time All Star with 372 goals and retired with concussion symptoms.

The game had some weather problems in trying to accommodate its ballpark setting. It was slated for 1:00 p.m. but someone figured the weather would get colder as evening approached so, at the last minute, they changed the starting time to 3:00 p.m. And still the crowd came without much notice.

The line of Clarke, Bill Barber and Reggie Leach, the Flyers' most productive line ever, played 15 minutes. And the crowd appreciated its appearance.

The players enjoyed it too. Just being together again was fun. This was a new experience for hockey players and they ate it up. And especially in this comparatively new ballpark which already has had some emotional experiences of its own, it became a fitting setting.

In two games, the Alumni Game and the one between the current players and the New York Rangers, hockey attracted almost 100,000 people in two days. Everything turned out fine for the Flyers, the NHL and the city except the final result of Monday's game. When you're playing on home ice with a two goal lead, and especially when you get a penalty shot at the end, you're supposed to win. But the Flyers didn't. The Alumni Game was for the memory book. The Monday game was all business. And, on second thought, it was played on neutral ice. A big hockey game – outdoors.

Elsewhere, just when it appeared that the St. Joe Hawk was back, and Phil Martelli had taken his place as the winningest St. Joe's coach ever, they visited the Ivy League. And they lost. St. Joe's was erratic late in the game against Harvard and lost 74-69. Martelli's summation of the game, "We just aren't good enough," was correct. They shot 9 for 16 from the foul line and had only two players in double figures. Martelli added, "I've been very honest with this team. We're working upon being good but we are not there yet. This is another indication that there is still room to travel." The key player in the game for Harvard was Kyle Casey, who scored 26 points and turned a 7 point deficit into a 6 point lead. Harvard is now 12 and 1, matching its best start since 1946. St. Joe's had a fine first half, at one time producing a 20 to 7 run. But it just ran out of gas in the second half and failed to contain Casey.

Just when everyone had begun to zero in on St. Joe's, the attention of many shifted to La Salle. The Explorers scored an easy win over Hartford, 73-65, and are now 10 and 4 entering Atlantic 10 Play. They've won 9 in a row at Tom Gola Arena. La Salle was behind 17-13 midway in the first half but went on a 20 to 4 run forcing Hartford into 9 turnovers. La Salle played well together and placed 4 players in double figures. The Explorers were picked to finish 13th in their 14 team league, but seem determined to change some predictions. Last week belonged to Phil Martelli. John Giannini took over this week.

Drexel got off to a good start and whipped St. Francis of Pennsylvania 63-42. Bruiser Flint's Drexel team got off to a 21-5 lead and the game was never in doubt. Meanwhile, Villanova remained winless on the road after losing on Sunday night to Marquette, 81-77, in Milwaukee. Villanova has a freshmen-dominated team that made it close with 14th ranked Marquette and hung tough until the final moments. Duke had a laugher over Penn in Durham, 85-55.

And the 76ers broke even on their season-opening road trip defeating Golden State 107-79. It was their fourth game in six nights in two different time zones in a very difficult opening schedule. They did manage to break even in their four opening games and Lou Williams is off to a brilliant start.

There's one football note as the Eagles completed their so-so season (how else do you describe a season of 8-8 and no playoffs?) Tim Tebow has gotten a lot of space in the news and, according to the Washington Post, there's a lot more to come. His book, "Through My Eyes" is the story of his life as a football player and growing up as a Christian. It has now sold 220,000 copies. And his publisher, Harper One, is expecting more sales once Tebow has time to travel and promote the book in the offseason. Tebow did manage to make the playoffs, which is more than can be said for the Eagles, despite their strong finish.

Almost as major an accomplishment was Jeffrey Lurie's press conference on Monday afternoon. The big development was the continued future of Andy Reid which certainly was not greeted with unanimous approval.

As far as assistant coaches are concerned, those decisions (according to Lurie) will be made by Coach Reid. So we are in for another season of "It's my responsibility to put players in position to make us better." There is one point in which I totally disagree with Jeffry Lurie: mainly, the one of communication. A major part of the job of head coach or, in baseball, a manager, is communication. With the fans and particularly with those who purchase, at quite formidable prices, season tickets. They deserve to be considered when major decisions are reached and told why. Lurie's defense of Reid was not acceptable. The change in the duties of Juan Castillo, for instance, has never been fully explained and remains a topic of controversy.