By Dan Wing, Trang Do

CAMDEN, N.J. (CBS) -- The eight-year old girl struck by a stray bullet in Camden earlier this week has died

In a post on Facebook Friday night, eight-year old Gabrielle Phillips' father announced that she passed from a gunshot wound to the head after fighting for her life in a hospital for nearly two days.

Phillips got caught in the crossfire Wednesday night near 8th and Spruce Streets, and was shot once in the head.

Authorities say she was not the intended target in the shooting, rather she got caught in the crossfire.

The news of her passing comes just hours after law enforcement officials increased the reward to $12,000. That figure was doubled on Saturday and again on Sunday. It is now $50,000.

Authorities say the reward was made possible thanks to several contributions including the Norcross family, the Packetalk firm which provides public safety technology in Camden, as well as Vahan and Danielle Gureghian, the founder of CSMI, LLC, which manages Camden Community Charter School, where officials say Danielle was about to enter the third grade. The Gureghians are also paying for Gabrielle's funeral expenses, according to a press release. 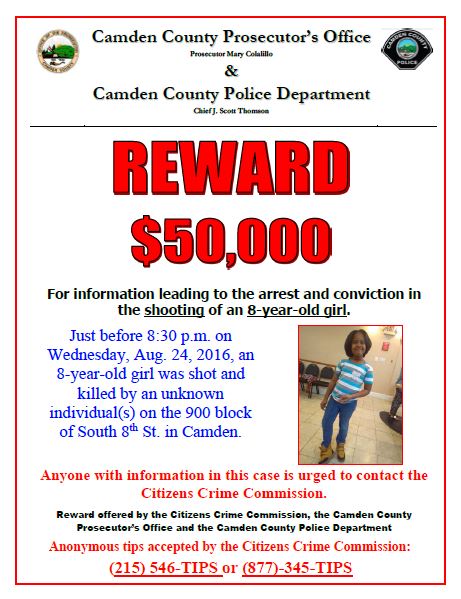 Authorities says they are pulling out all stops two find the people who opened fire on the block.

They are urging anyone with information about the shooting to call the Citizens Crime Commission at 215-546-TIPS, or 877-345-TIPS. Information can be left anonymously.

Gabrielle's family planned a vigil for Saturday night at the scene of the shooting.