PHILADELPHIA (CBS) -- One of the largest cocaine busts in United States history happened Tuesday in Philadelphia. Federal authorities continue to comb a cargo ship at Packer Avenue Marine Terminal in South Philadelphia. So far, they've seized 16.5 tons of cocaine -- 33,000 pounds -- which has a street value of more than $1 billion, the U.S. Attorney's Office says.

Investigators believe there is still a significant amount of cocaine remaining on the ship.

It's the largest drug seizure in the history of the Eastern District of Pennsylvania.

Two people were arrested and federally charged. According to the criminal complaint, Ivan Durasevic, the ship's second mate, and Fonofaavae Tiasaga were arrested in the bust.

Before coming to Philadelphia, the Mediterranean Shipping Company ship was previously in the Bahamas, Panama, Peru and Colombia. The ship was on its way to the Netherlands. 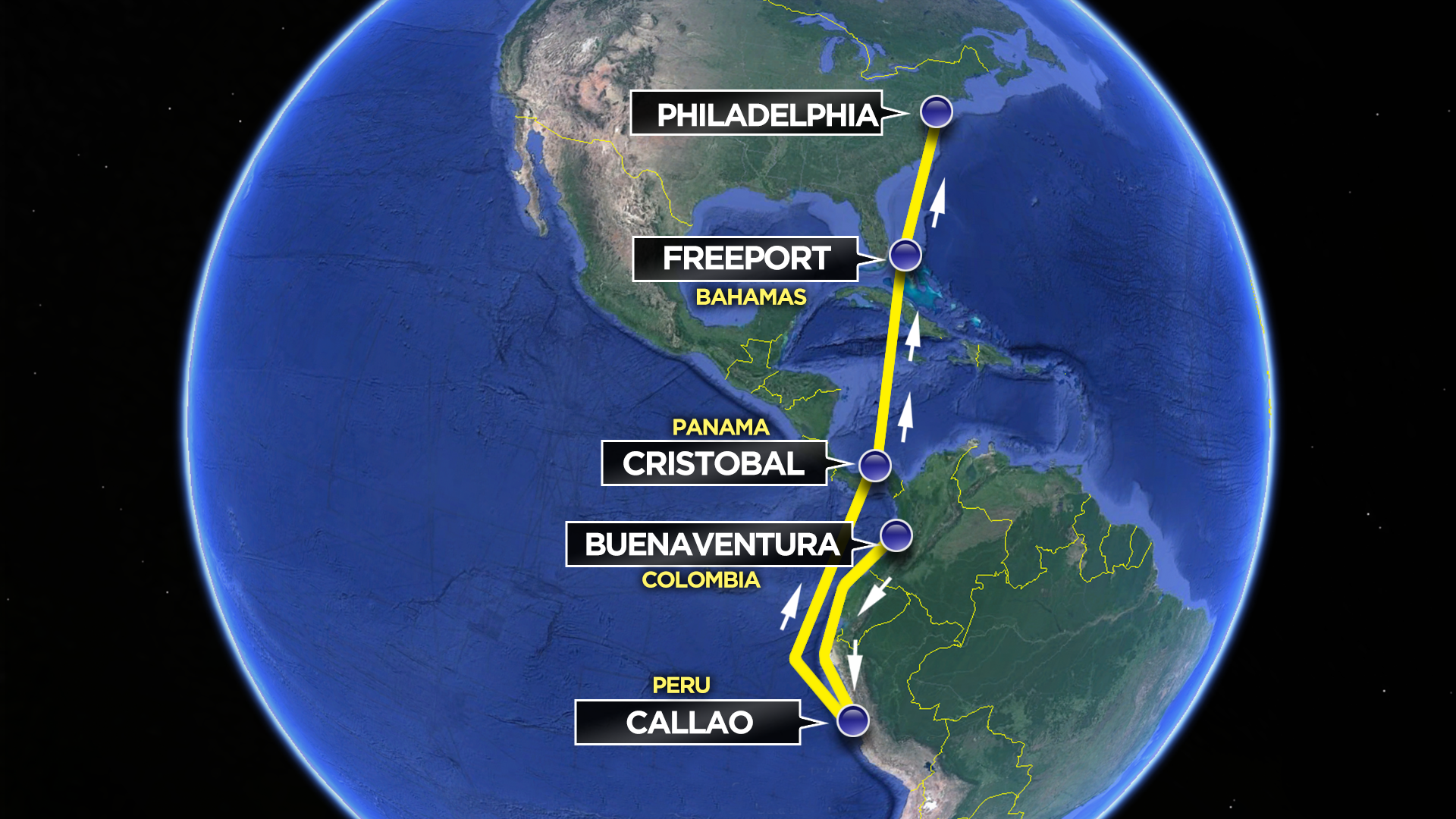 According to the complaint, Durasevic admitted his role to authorities in bringing cocaine onto the vessel after being offered $50,000 by the chief officer.

The ship was later approached by another eight boats, where more cocaine was loaded onto the ship, according to the complaint. Tiasaga told authorities his role was to help in moving the drugs below decks.

"A U.S. Customs and Border Protection and Immigration and Customs Enforcement Homeland Security Investigations-led multi-agency inspection of shipping containers aboard the MSC Gayane resulted in a substantial cocaine seizure in Philadelphia on June 17, 2019. Authorities continue to process the seized cocaine and continue its inspection aboard the vessel in the Port of Philadelphia. Authorities have made two arrests, and will release a final tally and additional details when this operation concludes," the U.S. Customs and Border Protection said in a statement.

Chopper 3 caught the action from above as investigators searched the ship.

Authorities say agents boarded the vessel, identified the container in question, inspected it and removed it from the vessel. It was then taken to an undisclosed federal facility for analysis.

Authorities are weighing the cocaine at the location and looking for other evidence, including DNA.

The length of the investigation could continue long enough that the vessel will have to be moved to make way for other incoming ship traffic.

"This is one of the largest drug seizures in United States history. This amount of cocaine could kill millions – MILLIONS – of people," McSwain tweeted.

The Mediterranean Shipping Company said in a statement they are taking "this matter very seriously."

"Mediterranean Shipping Company is aware of reports of an incident at the Port of Philadelphia in which U.S. authorities made a seizure of illicit cargo. MSC takes this matter very seriously and is grateful to the authorities for identifying any suspected abuse of its services," the statement reads. "Unfortunately, shipping and logistics companies are from time to time affected by trafficking problems. MSC has a longstanding history of cooperating with U.S. federal law enforcement agencies to help disrupt illegal narcotics trafficking and works closely with U.S. Customs and Border Protection (CBP)."

Mayor Jim Kenney's office said in a statement that Kenney is "thankful for the hard work" of local and federal authorities.

"Every ounce of drugs we keep off the streets is helping to keep Philadelphians safe and alive. Mayor Kenney is thankful for the hard work of the Philadelphia Police Department, FBI, ICE, U.S. Customs and Border Protection, and the U.S. Coast Guard," the mayor's office said in a statement.

A news conference is expected in the coming days.

CBS3's Joe Holden and Kimberly Davis contributed to this report.