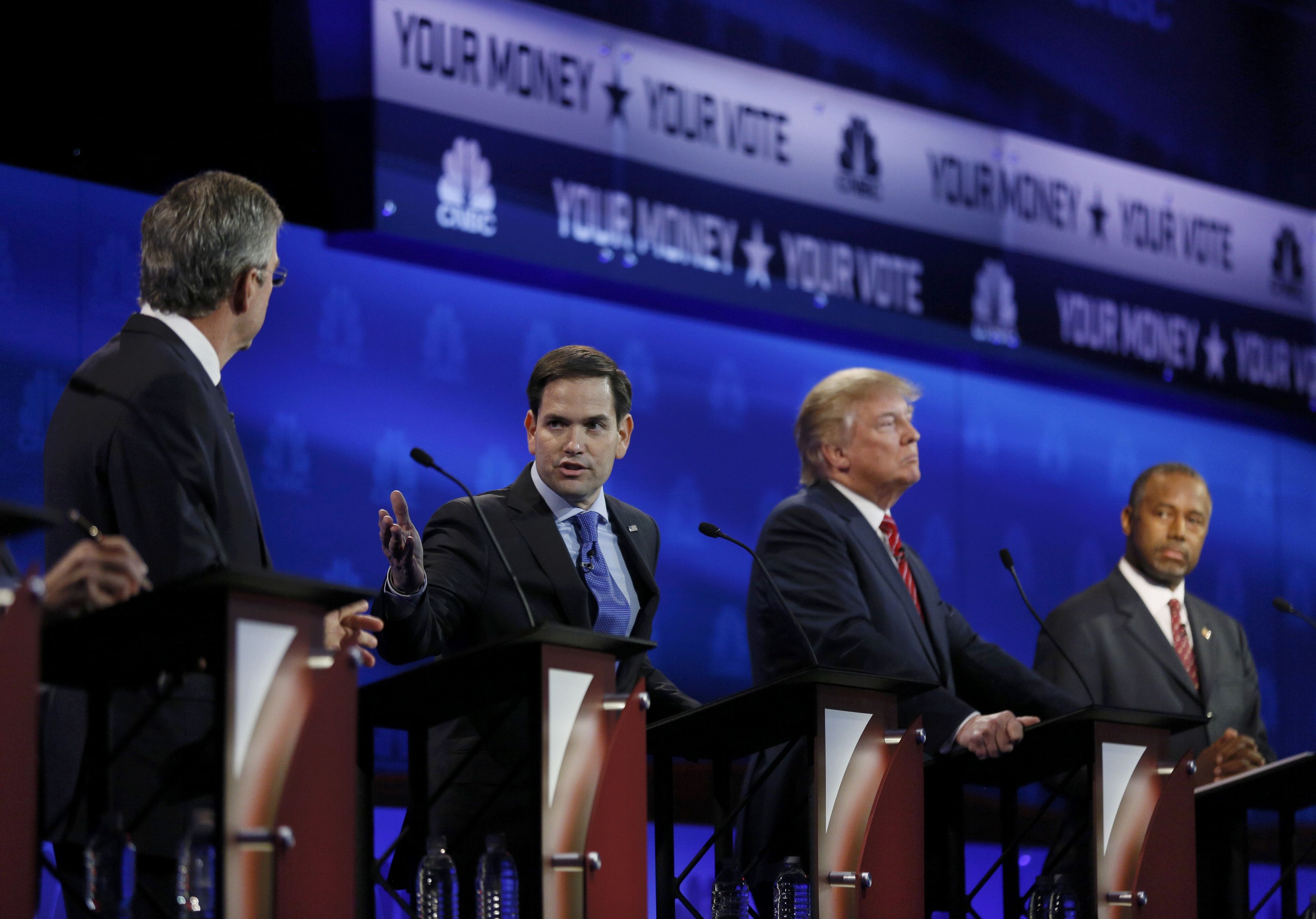 Being a Republican in New York City can be a pretty lonely existence, given that GOP voters make up just 10 percent of the city's electorate, compared to 69 percent for Democrats. And that's compounded if you're a college student. Just about a quarter of U.S. college students identify themselves as Republicans, compared to nearly half identifying as Democrats.

"In this day in age, it almost becomes uncool to be a Republican," explained Rachel Yan. The Fordham sophomore is accustomed to defending her identification as a Republican since she's originally from California. "No one wants to associate with the party in college. So we as young Republicans have to take on the responsibility and stand up for our beliefs," she explained.

In New York, those young Republicans are likely to be the ones embracing the free-market, business-friendly segment of the party.

On Wednesday, gathered in a campus residence hall basement, 14 members of Stony Brook University College Republicans sat in rows of chairs watching the 10 candidates outline their visions for America on a large projection screen.

After the candidates battled their way through the two-hour debate, Jeff Ehrhardt, who likes John Kasich and Marco Rubio, said that he gained more respect for Ted Cruz after seeing his performance. "Cruz is laying out a clear and concise policy," he said. Ehrhardt was happy with Kasich and Rubio's performance as well. "Rubio has a clear stance on immigration, which I agree with. He articulated it well last night. And Kasich showed a little more feistiness," Ehrhardt added.

Classmate Husnain Mushtaq, an unwavering Kasich supporter, reflected on the volatility of the Republican race. "Right now, it's still very early." Mushtaq felt Kasich performed very well during the debate and was happy with how he expressed his fiscal plans, since Mushtaq thinks the economy is one of the most important challenges facing the U.S.

The latest CBS News/New York Times national poll found Ben Carson overtaking Donald Trump, which the Stony Brook students celebrated, since none of Stony Brook Republicans watching debate are voting for Trump. They agreed, however, his performance was more mellow than in previous debates.

Towards the end of the debate, the students all felt that Cruz, Kasich, and Rand Paul had the standout performances for the night. Many of the students who went into the debate supporting Paul felt that he wasn't given enough time to share his views, but did well when he had the opportunity.

"I still support Paul even though he hasn't done well in the debates. I hope he'll learn and do better," said Dan Elton, a Stony Brook graduate student.

Alec Szigeti is also resolute in his support for Paul. "He's pretty much the only person on stage who says things like, we should end the endless war overseas, we should curb drone strikes due to how many civilians the strikes end up killing, no matter if it's Democrats or Republicans in control of the program," the Stony Brook sophomore said. Szigeti campaigned during the last election cycle for Paul's father, Ron, and is an active supporter for his son.

Fifty miles away, twenty-five members of the Fordham University College Republicans joined the Women's National Republican Club for the debate. They sat at two circular tables in a banquet hall above Fifth Avenue. Many students hoped for a debate focused on the economic challenges facing the country.

They were disappointed with the tone of the first hour, as they watched candidates harangue each other and their moderators. But when New Jersey Governor Chris Christie pounced on a question about fantasy football and berated the moderators, saying, "Wait a second -- we have $19 trillion in debt, we have people out of work, we have ISIS and al-Qaeda attacking us, and we're talking about fantasy football," the students at the Fordham tables broke out in applause.

"He has really convincing rhetoric and understands that something as trivial as fantasy football is a non-issue in the face of the larger problems," said Christie supporter, Michael Delosi.

The economy was a hot topic and, despite the fact that Rubio has been his top choice, Mike Myllek thought Ohio Governor John Kasich stood out because of his fiscal agenda. "Kasich had a much more in depth and realistic tax plan, while the others were preaching incorrect plans that couldn't even work financially."

By the end of the debate, students generally agreed: Carson and Bush didn't live up to expectations.

"Going in I was in support of Rubio, Kasich, and Bush," said junior Sebastian Albrecht.

In the end, the debate did little to change any of the students' minds, however, and many left with the same opinions they had prior to the debate: Stony Brook Republicans for Rand Paul and Fordham Republican students for Marco Rubio.