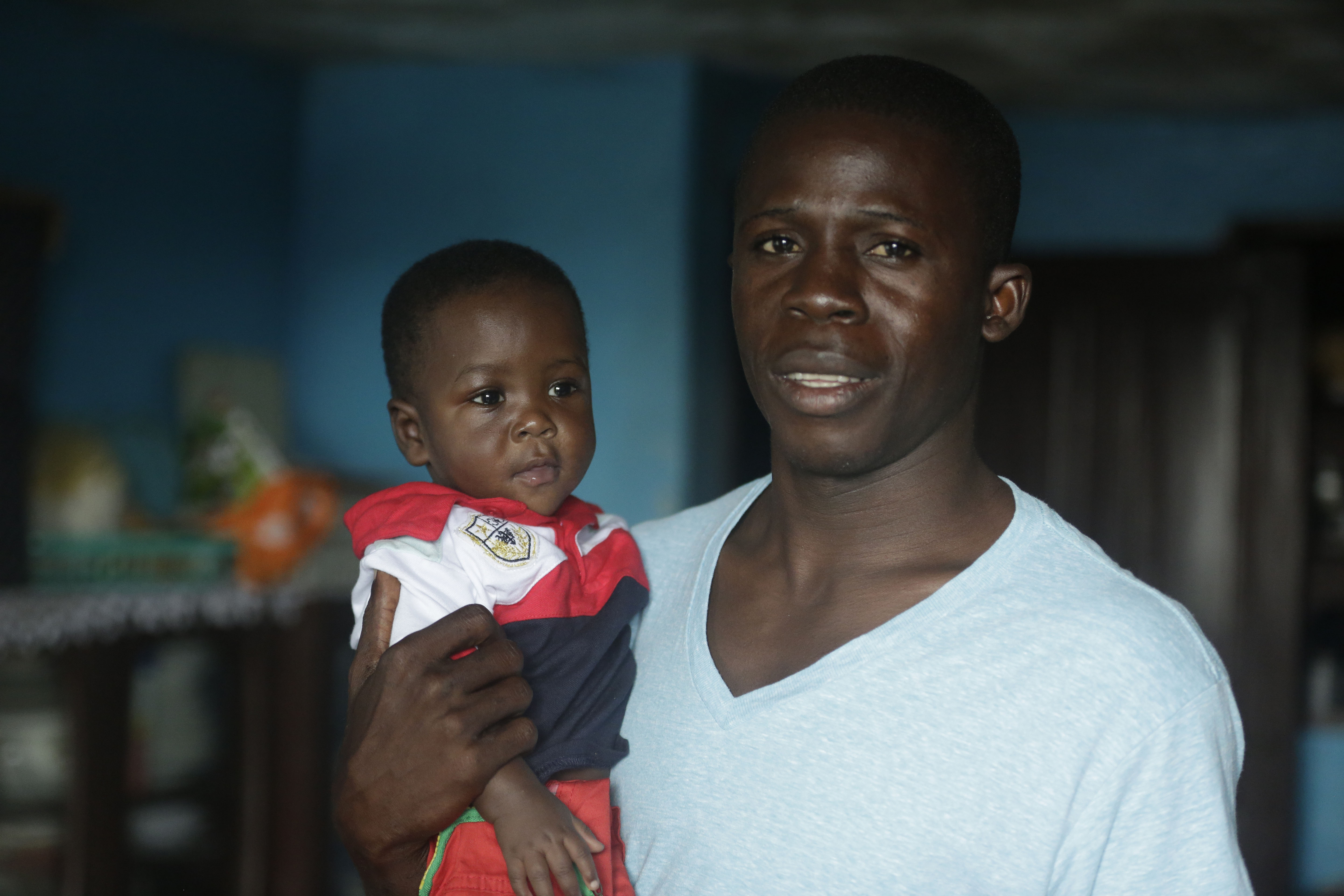 FREETOWN, Sierra Leone -- The 19-year-old mother clutched her newborn son as she arrived at the Ebola holding center. The child's father was gone, and she had no family to help her. She knew she was dying.

Nurse Donnell Tholley, 25, had seen hundreds like Fatu Turay in his work at Ebola clinics around the country. He knew to keep his distance - most patients would not make it, and any emotional connection would make the work even harder.

But taken by her plight, he stopped to ask the name of her baby, who was just over a week old.

"Bobo," she replied faintly - a term of endearment that translates as "my sweet boy."

"That's not a real name, though," Tholley replied. Impulsively, he grabbed a scrap of paper, wrote down his name and phone number, and gave it to her.

Tholley moved on to other patients, and soon the woman was gone, whisked off to a treatment center along with the little boy.

About a week later, he received a phone call from a number he didn't recognize.

A nurse was on the line. Your wife is dying, she said. You must come to see her right away. There isn't much time left.

Tholley insisted he had no wife. But he recalled the woman he had met and thought: Could this be Fatu Turay?

By the time he got to the treatment center, her body had already been removed for burial. The baby boy was nowhere to be found. In the nurses' hands, though, was the sheet of paper with Tholley's information on it; Fatu Turay had clutched it as she lay dying, alone.

The Ebola epidemic killed nearly 4,000 Sierra Leoneans and left thousands of orphans. Some were placed with other family members or with neighbors who took them in. The rush to isolate and treat the sick, though, meant many were too fearful to take in the children whose parents had succumbed to the deadly virus.

Baby Turay, now only about 2 weeks old, was brought to a hospital in the capital, free of Ebola but still fighting for his life. He had no mother to nurse him and no one had money to buy him formula. When he wailed out of hunger, the nurses would inflate empty surgical gloves and tie them shut so he could suck on the fingers for comfort.

Tholley eventually located the boy and went to see him. The nurses pleaded with him: If not you, then who will take this child? Without a parent, he will die.

Tholley was working long hours. How could he care for a sick child? And yet the little boy's fragility stuck with him even as he continued to treat other patients. The little boy's ribs protruded through his skin. His tiny feet bore scars from the harsh disinfectant used to clean the Ebola wards where he got his start in life.

"I kept thinking of this boy and how at his young age he had no one else," he says.

He approached his own mother, Josephine Kadie Bangura, a former maternity ward nurse. Could he become a father? At first, she was frightened. Had the boy tested negative? Was it possible he had contracted the virus from his mother?

She had raised two sons and two daughters of her own, and knew a thing or two about babies. Her heart melted.

With his family's support, Tholley decided to adopt the boy. He left the nurses at the hospital with about $200 to care for the child until arrangements could be made.

On Jan. 13, Donnell turned 26. A week later, the nurses brought the now 6-week-old baby to the family apartment in Freetown. He was greeted by his new grandmother and his great-grandmother, Marie, who calls him her "little husband."

"He had been crying so long at the hospital that at first he would open his mouth to cry and no sound would come out," says Bangura, 53.

There were no adoption lawyers, no home studies done. The family still carefully keeps the only proof of their story - a well-worn piece of notebook paper on which a nurse from the hospital wrote in blue ball-point pen the names of all who witnessed the baby's arrival at his new home: "The following nurses brought Donnell Emmanuel Sallieu Tholley home to me on the above date together with his father Donnell S. Tholley," it says. Bangura signed the piece of paper.

They call the boy Junior. He's 8 months old now. Tholley's cell phone displays a picture of the two of them. Tholley, whose working hours have diminished as the epidemic has waned, wants to get married and have more children someday so his son will have brothers and sisters.

"People say I made a brave decision," he says. "The task is very hard, but God being our helper, up 'til now it is going very well."