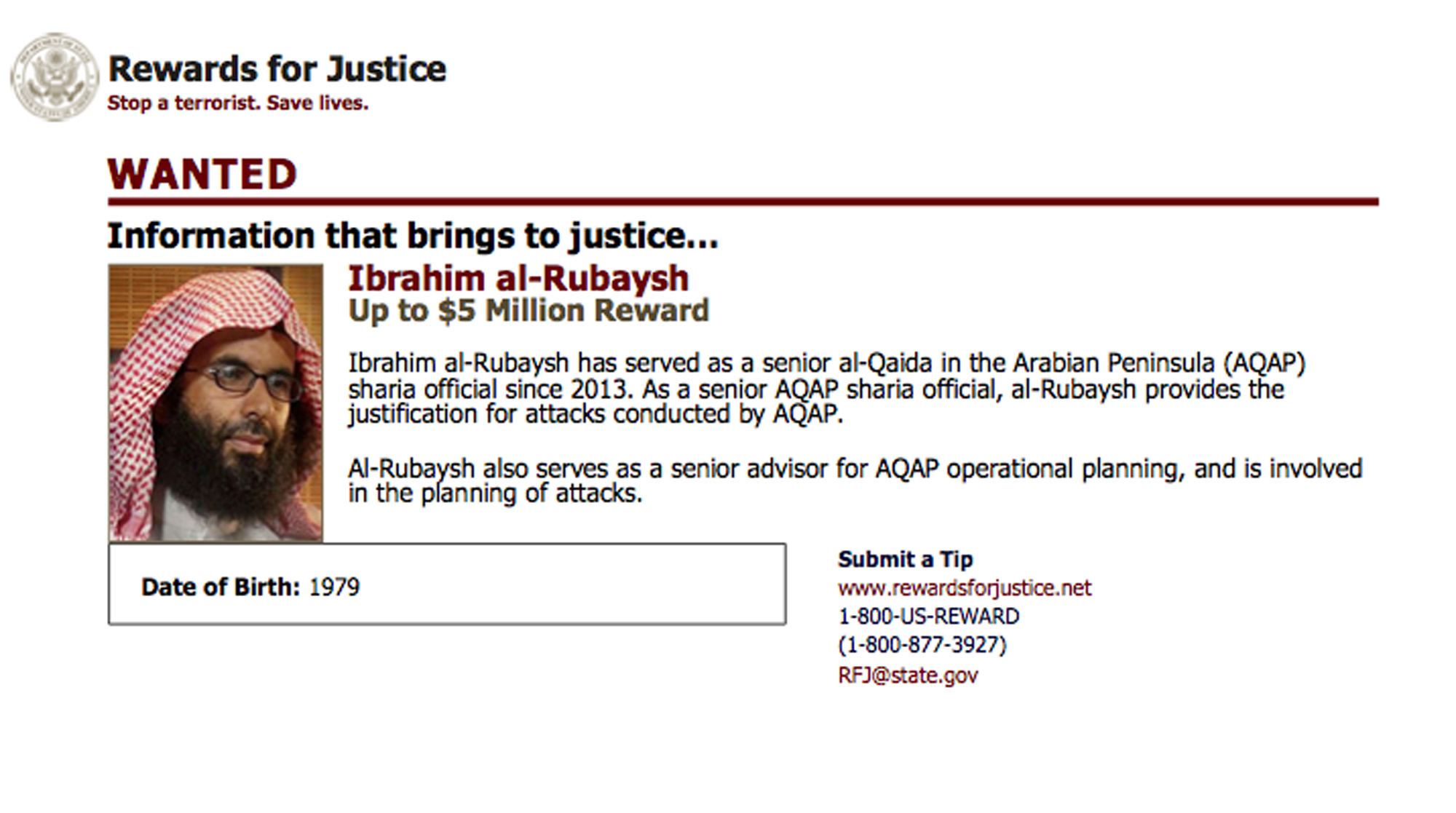 CAIRO -- Yemen's al Qaeda branch announced on Tuesday that its top cleric, a Saudi-national who has had a $5 million bounty on his head, has been killed, allegedly in a drone attack.

Al Qaeda said in a statement posted on Twitter that Ibrahim al-Rubaish was killed, along with other, unnamed members of the group, by a drone late Sunday. The statement did not specify the location of the drone attack.

Yemeni and U.S. officials had no immediate comment on the claim.

Al-Rubaish, believed to be in his late 30s, was released from Guantanamo Bay in 2006, after which he joined al Qaeda in Yemen. He was considered the group's main ideologue and theological adviser and his writings and sermons were prominent in its publications.

Last year, he hailed the seizure of large swaths of land in Iraq and Syria by al Qaeda's rival, the Islamic State of Iraq and Syria (ISIS). "I ask God that efforts are united to target the enemies of the religion," he said in a video recording at the time.

If the drone attack is confirmed, it would be the first use of unmanned aircraft since Yemen sank further into turmoil last month, prompting a Saudi-led coalition to launch airstrikes on March 26 in an attempt to halt Yemen's Shiite rebels known as Houthis who have taken over much of the country.

U.S. officials have said the collapse of Hadi's government could undermine Washington's counterterrorism strategy against al Qaeda's branch in Yemen, known as al Qaeda in the Arabian Peninsula (AQAP). Washington considers the branch to be the most powerful in the terrorist network.

Tuesday's news comes two months after AQAP announced the death of one of its senior leaders, Sheikh Harith an-Nadhari, in a drone strike. Nadhari was one of the top five members of al Qaeda's Yemen-based branch, deemed by many analysts to be the group which poses the most significant threat to the U.S. and other Western nations.

In late March, about 100 U.S. military advisers withdrew from the al-Annad air base where they had been leading the U.S. counterterrorism efforts in Yemen.

Washington rarely comments on drone attacks. U.S. officials had been concerned their counterterrorism capabilities would be diminished because of the withdrawal of their staff. However, they said the al Qaeda branch will likely be drawn toward the internal Yemeni conflict, and away from plotting to go after Western targets.

Al Qaeda is a staunch rival of the Shiite rebels, and has already waged a number of attacks against their advances.

U.S. officials also said that CIA drone strikes would continue but that there will be fewer of them.