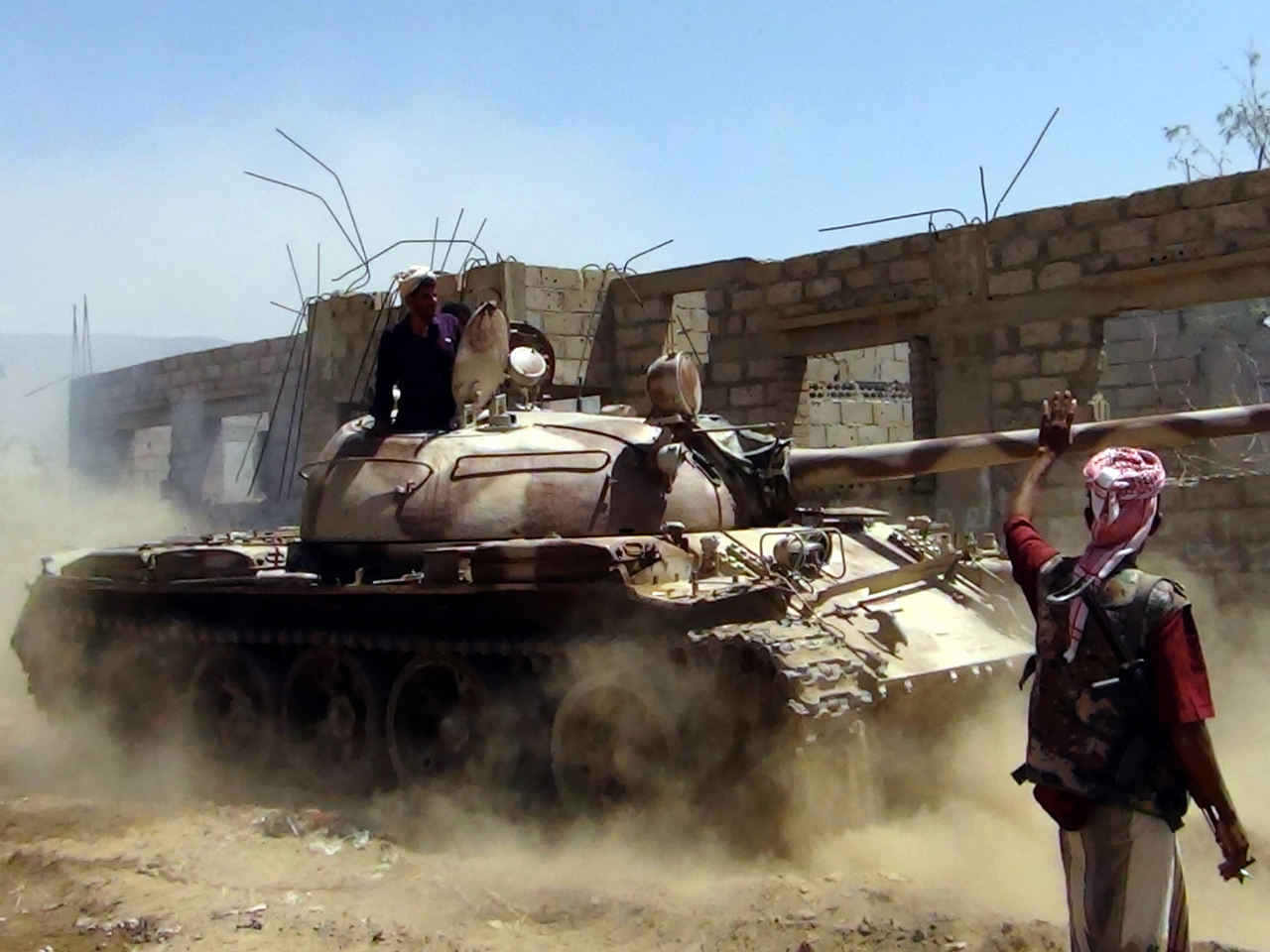 (AP) SANAA, Yemen - Yemeni warplanes and troops backed by heavy artillery waged a four-front assault on al Qaeda militants Tuesday, trying to uproot their hold in the southern desert with the help of a team of U.S. troops at a nearby air base.

The central U.S. role in the operation would be a significant stepping up of American-Yemeni cooperation against al Qaeda's local branch, which is accused of a string of attempted attacks against U.S. targets.

The offensive signaled increased concern over the growing strength of al Qaeda in Yemen since the militants gained control of several southern towns by taking advantage of the security vacuum during an uprising that led to the ouster of President Ali Abdullah Saleh.

Yemeni troops battled the militants on the ground in three areas as warplanes bombed suspected hideouts. Military officials said the main goal was to retake Zinjibar, the provincial capital of Abyan province.

Yemen's ill-equipped and poorly trained military repeatedly has stumbled in trying to fight al Qaeda ever since the militants seized territory last year. But since Saleh's resignation in February, his successor, Abed Rabbo Mansour Hadi, has vowed to make the fight against al Qaeda a top priority.

The effort is supported by the U.S., which considers al Qaeda's offshoot in Yemen the network's most active. On Sunday, the White House's top counterterrorism adviser, John Brennan, met with Hadi in the capital Sanaa.

The visit followed the revelation that the CIA had thwarted an ambitious plot by al Qaeda's affiliate in Yemen to destroy a U.S.-bound airliner using a new, sophisticated underwear bomb. But the bomber was actually a double agent who turned the bomb over to the U.S. government.

Several Yemeni military officials told The Associated Press on Tuesday that unlike previous, failed offensives against al Qaeda, this time the United States was providing direct logistical support to the Yemeni military.

The officials said an air base called al-Annad in the southern province of Lahj is serving as a command center for nearly 60 U.S. troops who were providing advice, information and logistical support to Yemeni troops.

The Yemeni military officials, who are familiar with the workings of the army in the south, spoke on condition of anonymity to discuss the highly sensitive cooperation. The U.S. Embassy in Sanaa could not be reached for comment.

On Sunday, al Qaeda fighters attempted an attack from the northern gate of al-Annad air, close to the troops' living quarters, but were repelled. One Yemeni officer was killed in the attack, the officials said, and the Yemeni military later deployed heavy troops to protect the air base.

The Pentagon said a week ago that it had sent military trainers back to Yemen for "routine" counterterrorism cooperation with Yemeni security forces.

"We have begun to reintroduce small numbers of trainers into Yemen," a Pentagon spokesman, Navy Capt. John Kirby, told reporters.

Another American official said the arriving troops were special operations forces, who work under more secretive arrangements than conventional U.S. troops and whose expertise includes training indigenous forces. The official spoke on condition of anonymity because he was not authorized to discuss the subject publicly.

The U.S. military training program in Yemen was suspended last year amid the revolt against Saleh. Under the former president, Washington had greatly expanded counterterrorism aid, at one point having between 100 and 150 trainers there.

The U.S. also has a substantial naval presence near Yemen. A Marine contingent aboard U.S. Navy ships arrived in the area over the weekend on a routine rotation. It includes the 24th Marine Expeditionary Unit, with about 2,000 Marines aboard vessels including the amphibious assault ship Iwo Jima. Also in the group is the USS New York, an amphibious transport dock ship that was built with more than seven tons of steel from the World Trade Center. It is the New York's maiden deployment.

Al Qaeda's branch in Yemen, known as al Qaeda in the Arabian Peninsula, was behind the failed Christmas 2009 attempt to bomb an American airliner as well as a foiled attempt the following year to mail package bombs to the U.S.

The large offensive began Saturday but sharply escalated on Monday.

By Tuesday, Yemeni troops had pushed into the center of Zinjibar and military helicopters were flying over the city for the first time in an indication that al Qaeda militants did not have heavy weaponry capable of shooting them down, one military official said.

The troops "can for the first time catch a glimpse of the torched government buildings" in which al Qaeda's fighters had hunkered down during the battles that turned the downtown into a ghost city after thousands of residents fled, the official said. He added that six militants were captured in Zinjibar, but provided no other details on casualties on either side.

To the north, in the town of Jaar, warplanes were bombing al Qaeda hideouts Tuesday, according to the officials. One raid destroyed parts of a house, leaving two militants' bodies' charred. When local residents went to inspect the site of the attack, a second raid mistakenly killed eight of them and wounded 20, the officials said.

The military also managed to drive militants out of the town of Hurour, to the west of Zinjibar, the officials said.

Abdu Dail, who fled Hurour with his family on Sunday, said most of the townspeople left after the military warned them about the upcoming offensive. Later Sunday, warplanes bombed the town, killing at least 30 al Qaeda militants.

To the east of Zinjibar, the military on Tuesday bombed al Qaeda hideouts in an area called Youssef Mountain on the outskirts of the town of Lawder. The town's residents, backed by the military, last year drove al Qaeda fighters who had overrun Lawder out but the militants tried to make a comeback.

Clashes following the bombardment killed two soldiers and two civilian volunteers, officials said. Eight bodies of al Qaeda militants were found but it wasn't clear when they were killed. The Yemeni officials all declined to be identified because they are not authorized to speak to the media.