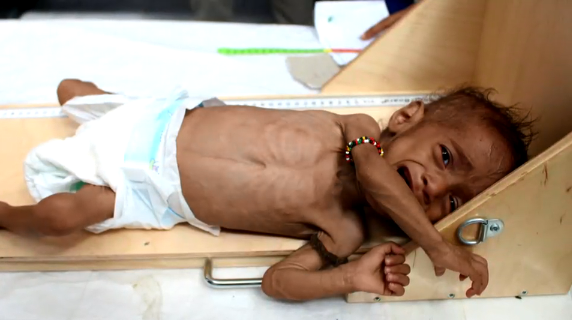 UNITED NATIONS -- Tens of thousands of young children may have died in Yemen because of malnutrition since the start of the civil war there, according to a new report.

"We are horrified that 85,000 children in Yemen may have died because of extreme hunger since the war began," said Tamer Kirolos, country director in Yemen for the non-profit aid organization, Save the Children. "For every child killed by bombs and bullets, dozens are starving to death and it's entirely preventable."

According to the U.N., 400,000 children are expected to suffer from severe acute malnutrition, the deadliest form of extreme hunger this year, an increase of 15,000 over 2017.

Making matters worse, Kirolos said, "Children who die in this way suffer immensely as their vital organ functions slow down and eventually stop ... some too frail to even cry."

Food is being sent, but children are dying

"Barriers to importing and distributing supplies contribute to and are compounded by a spiraling economic crisis that has seen the cost of food nearly double since the conflict escalated in 2015," the new report says, and when aid supplies reach the impoverished country, "armed checkpoints crisscross the country, delaying distribution" in addition to "frequent attacks on food processing and distribution."

The U.N. children's agency paints an equally bleak picture: "Right now in Yemen, there are 400,000 children under the age of 5 who are severely malnourished. They could die any day," Juliette Touma, the chief of communication for the Middle East and North Africa told CBS News.

Despite brief halts to the fighting, the war in Yemen rages on. Save the Children's report Tuesday said in Yemen, they "observed a dramatic increase in airstrikes on Hodeida over recent weeks. Increased fighting has also been reported in Taiz, Saada and Sanaa."

"Just over one year ago, the Saudi-led coalition closed off all access to the country, effectively sealing Yemen off from the outside world," the report states. It was not until six weeks later that the Saudi-led coalition announced ports would reopen temporarily, but key food commodities and fuels later fell by half, Under-Secretary-General for Humanitarian Affairs and Emergency Relief Coordinator, Mr. Mark Lowcock, told the U.N. Security Council in October.

War, blockades and bureaucracy slow aid to the starving

On Friday, Lowcock said aid operations have delivered significant food and supplies but since October, "What in fact happened was that violence escalated on several fronts."

"Fighting, blockades and bureaucracy" have forced Save the Children and other aid organizations to bring vital humanitarian supplies for the north of the country through the southern port of Aden, a diversion that can slow delivery times by three weeks, the new report said. That point was made last Friday at the U.N. by World Food Program Executive Director David Beasley, who had just returned from the port of Hodeida.

With great expectations, the U.K. introduced a draft resolution at the U.N. on Monday, hoping to forge a ceasefire agreement, open all the ports, and infuse much-needed cash into Yemen.  With an estimated 14 million civilians at risk of starvation caused by the war between Yemeni rebels and a military coalition led by Saudi Arabia, the Saudis and their partners, with Kuwait in the lead on the Security Council, have delayed a British plan for a truce.

After a day of negotiations at the "expert" level Tuesday, three Security Council diplomats told CBS News it was unlikely a vote would take place before week's end, a delay further delayed by a Council trip to China beginning on Saturday.

Stephane Dujarric, Spokesman for the U.N. Secretary General, told reporters the Special Envoy for Yemen, Martin Griffiths, along with the U.N. Humanitarian Coordinator in Yemen, Lise Grande would travel in Yemen, beginning on Wednesday of this week.

France has supported the draft resolution, which was penned by the U.K. and negotiated by all five permanent members of the Security Council. France's Ambassador Francois Delattre made the point about the urgency to CBS News: "Each passing day is a life and death issue for many civilians in Yemen. So there is no time to waste to stop this war and initiate a political process in support of Martin Griffiths' efforts."

The warring parties, including the Yemeni government and the Houthis have agreed to start talks in Sweden, perhaps as early as December, diplomats say.

Meanwhile, international criticism of the Saudis' handling of the offensive in Yemen has increased along with the civilian death toll from the war.

On Tuesday, Beasley told CBS News: "What Yemen needs most is an end to the conflict. It also desperately needs a strong humanitarian response coupled with major economic assistance."

"Children are dying, as I saw just last week in front of my own eyes. As humanitarians, we need unimpeded access to deliver life-saving food to the children, women and men who need it the most," Beasley said.

"Put an end to the war on children"

"This is one of those issues where the U.N. could have a truly significant impact," a Security Council diplomat told CBS News, "but very intense political gridlock is winning the day."

"I will leave the issue of how to work out the [U.N.] resolution to the political leaders, World Food Program chief said, "I am certain a quick path to peace, coupled with major humanitarian and economic aid, would be the best thing possible for Yemen and its children."

The U.N. children's agency's Juliette Touma said they are pleading with all parties "to put an end to the war on children in Yemen."