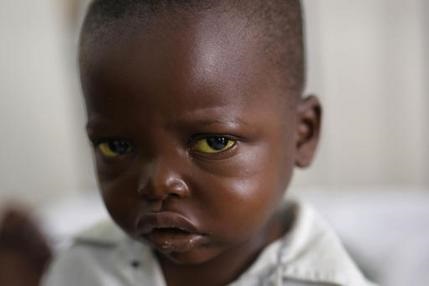 As the largest yellow fever epidemic in decades continues to sweep through the Democratic Republic of Congo (DRC) and Angola, the charity Save the Children is warning that it could soon spread to Europe, Asia, and the Americas.

As a last ditch effort to prevent further spread through Africa -- and potentially the globe -- the organization is launching an emergency vaccine program in the Congolese capital of Kinshasa. Since the global stockpile is so low, the vaccines will contain a fifth of the normal dose in order to reach as many children and families as possible.

"There is no known cure for yellow fever and it could go global," Heather Kerr, Save the Children's country director for the DRC, said in a statement. "The mass vaccination campaign in Kinshasa needs to take place now so that we can try and stop Yellow Fever spreading by land and air to more cities in Africa and across the world."

Yellow fever is a hemorrhagic disease that causes fever, headache, jaundice, muscle pain, nausea, vomiting and fatigue. A small percentage of people infected develop a more severe form of the disease, with about half of these people dying within seven to 10 days, according to the World Health Organization.

The virus is spread through the bites of mosquitoes, mainly the Aedes Aegypti, the same mosquito that carries Zika and dengue.

To date, the outbreak has claimed nearly 500 lives, with thousands more cases suspected. The WHO warns that those numbers could climb as many as 10 to 50 times higher.

"This outbreak response has been complex and challenging," Tarik Jasarevic of the WHO, told CBS News. "For the first time, WHO and other partners are dealing with an outbreak of yellow fever in a dense, urban setting. The changing global situation in the past 20 years, including the rapid rise of urbanization, increased mobility between large cities in Africa, and new environmental and climatic factors mean an increased risk of mosquito-borne diseases spreading internationally."

A full dose of the vaccine provides lifetime immunity from yellow fever. The smaller, so-called "fractionalized" dose provides stop-gap immunity for about a year.

The global emergency stockpile of yellow fever vaccines is normally held at 6 million doses, according to the WHO.

"Due to the unprecedented scale of the ongoing outbreak, the stockpile has been depleted multiple times this year. Prior to this outbreak, no more than 4 million doses had been used to control an individual epidemic," Jasarevic said. "Since January, more than 27 million doses have been deployed from this stockpile to Angola and DRC."

He points out that the yellow fever vaccine takes a minimum of six months to produce, making it logistically challenging to respond quickly to an increase in demand.

At this time, WHO has not declared the current outbreak a Public Health Emergency of International Concern (PHEIC). However, it has decided that it is a "serious public health event that warrants intensified national action and enhanced international support."

"This outbreak is manageable if we can protect enough people with the vaccine," Jasarevic said. "The aim is to prevent a PHEIC with a strong response."