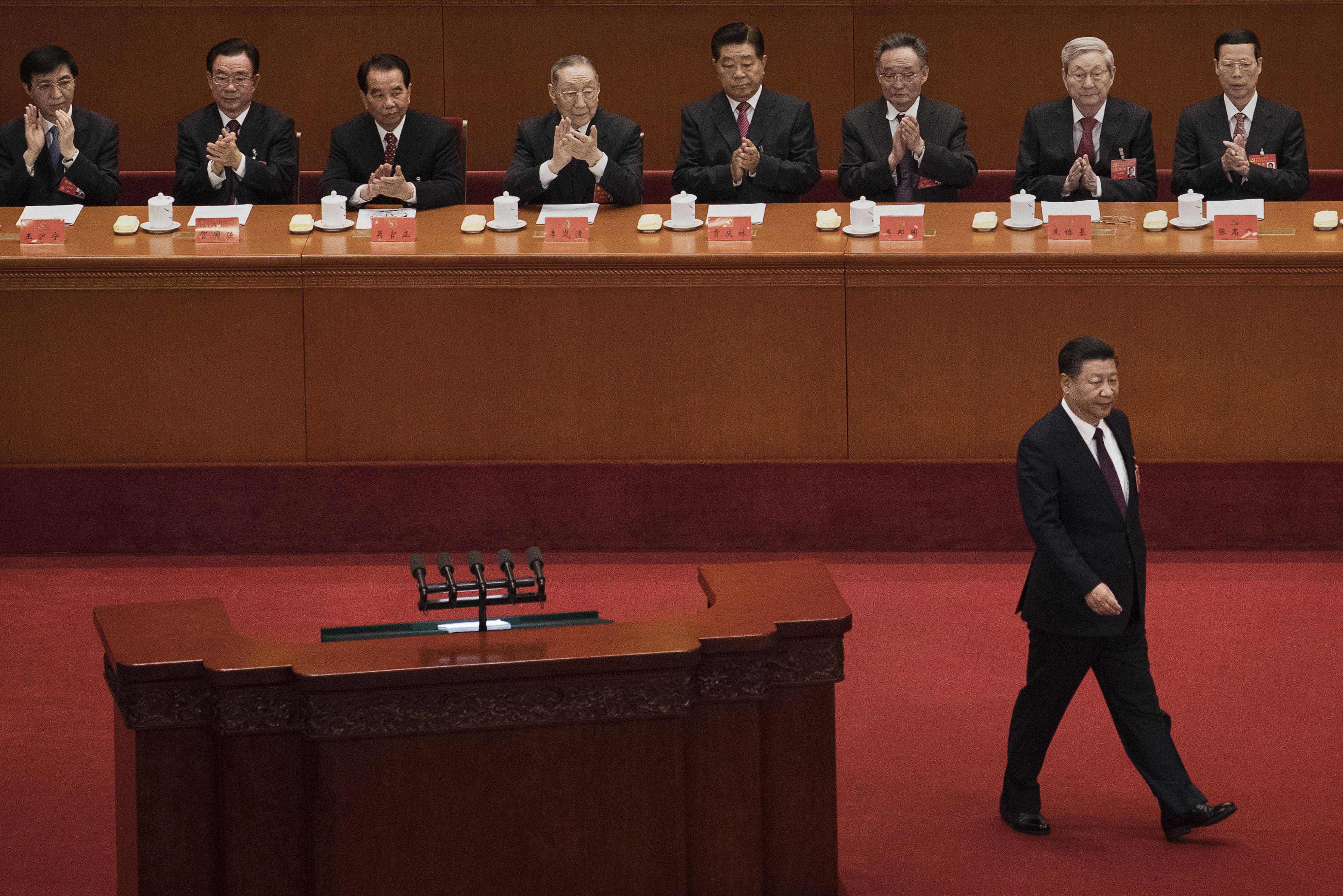 BEIJING -- The model lunar rover didn't much impress the retiree in a cotton Mao jacket visiting an exhibition of Chinese achievements under President Xi Jinping. Nor did the displays charting China's climate change progress or other technological advancements.

Instead, it was an exhibit showing how Xi has locked up thousands of corrupt officials that drew his approval.

"We finally have a leader who is doing something right," said the retiree, a 72-year-old former wastewater worker who would give only his surname, Lu, as he gazed at pictures of handcuffed Communist Party cadres. "He's strong. He's not afraid of anything, or anyone."

Lu is among an estimated 780,000 people who have visited the vast exhibition in west Beijing put on by the Communist Party's propaganda department to coincide with the party's twice-a-decade national congress, at which Xi is to receive a second five-year term in office. The two events - one teeming with ordinary citizens, the other taking place behind closed doors under heavy security - show both how Xi has centralized power under his control and how he is leading China into what officials portray as a confident, gleaming new era.

Since Xi assumed the party's leadership in 2012, dissident historians have warned that his accumulation of power could slide dangerously into something resembling the excesses of Mao Zedong's totalitarian reign. Rival Communist Party factions have seethed under Xi's anti-corruption campaigns, which have landed political challengers and potential successors in jail, while stepping up supervision of cadres at all levels. Chinese and international rights activists, meanwhile, have railed against Xi's crackdowns on dissent and universal values - the most suffocating in decades.

But the thronging Beijing exhibition, titled "Five Years of Grinding and Brave Struggle," is a microcosm of how Xi has pulled the levers of nationalism and populism to win over the masses - if not his critics.

Walk past the main atrium explaining the workings of the Communist Party's seven-man leadership body, and it quickly becomes a one-man show.

Xi's face looms from nearly every wall. In a room displaying miniature models of the People's Liberation Army's aircraft carrier and newest ballistic missiles is a photo of Xi peering down the barrel of a laser training rifle. Hanging in an alcove explaining China's agricultural advances is a picture of Xi greeting weathered farmers. In the economics hall, Xi's smiling countenance presides over charts showing the J-shaped GDP growth curve.

The main hall was flanked by wall-to-ceiling television screens, one showing Xi's work to reduce poverty domestically and the other showing his exploits at international summits.

Side halls covered everything from media development and tourism to relations with Taiwan, the self-governing democratic island that China considers its own territory. Photos of Xi shaking hands with Ma Ying-jeou, Taiwan's previous, more China-friendly president, were heavily featured, but there were none of the island's current, pro-independence president, Tsai Ing-wen.

"It does make you proud for the motherland, doesn't it?" said a 20-year-old student at Beijing University of Technology who also gave only his surname, Wang. "His policies are sharper, but you also feel he's close to the people. He's also different because he speaks up on the world stage. As a Chinese, that's a good feeling."

While the government doesn't publish public approval ratings or similar survey data, anecdotal evidence suggests such sentiments appear to be widespread in China. Xi's sway over elite politics also appears increasingly unchallenged: the party voted unanimously on Tuesday to insert Xi's name and dogma into its constitution. Only one other Communist Party leader ever attained this ideological designation while in power: Mao himself.

Thousands of Chinese are voting with their feet, choosing to move to nations where civil liberties are better ensconced and legal guarantees more reliable.

Qiao Mu, a former scholar at Beijing Foreign Studies University who was banned from teaching for his dissident writing, said selling a benevolent strongman image is a classic tactic. In Mao's day, propaganda also tied his personal image to the country's progress.

"The cults of personality and nationalism are invariably linked," Qiao said by phone from the United States, where he now lives. "If you look at Xi's speeches, the leading phrase you hear is 'strong nation,' and another is 'new era.' It's ... empty words and slogans, except one clear message: 'I'm going to handle everything.'"

Aside from Xi, the "Five Years" exhibit had few mentions or photos of other top Communist Party leaders, and only cursory video clips of Jiang Zemin and Hu Jintao - party leaders from 1989 to 2012.

The less seen of Jiang and Hu the better, said Lu, the former wastewater worker who admired Xi's anti-corruption campaign. China's economy was always bound to develop, so those leaders did not deserve much credit for steering the country's opening and growth, Lu said.

Instead, Jiang and Hu let elite corruption fester until Xi cleaned it up on behalf of the people, said Lu, who worked for decades in the oil fields of Jilin province in northeast China.

Lu also admired Xi's muscular presence on the international stage compared to China's previous timidity. One example, he said, was China's response when U.S. bombs in 1999 hit the Chinese Embassy in Belgrade, Serbia, killing three Chinese reporters. The U.S. said it was a mistake due to faulty targeting, but the Chinese public responded with outrage.

"How did Jiang Zemin react when a U.S. missile hit us?" Lu said. "He didn't dare to make a noise - not even fart!"

Then Lu walked out of the hall, past a massive red-and-yellow banner, 10 yards high and 40 meters across, erected directly in front of the exhibition entrance.

Unite around the leadership of Xi Jinping as the core, it said, to "ceaselessly advance the great mission of socialism with Chinese characteristics."