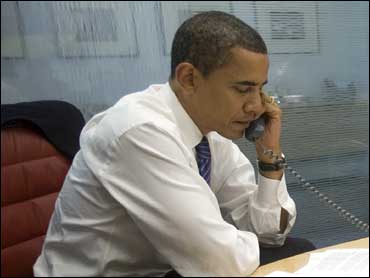 The National Rifle Association has denounced the move, which has already led one Republican senator to consider legislation aimed at ensuring a president can't use an applicant's gun ownership status to deny employment.

It's just one question on a lengthy personnel form - No. 59 on a 63-question list - but the furor over the query is a vivid reminder of the intensity of support for Second Amendment rights and signals the scrutiny Obama is likely to receive from the ever-vigilant gun lobby.

Obama's transition team declined to go into detail on why they included the question, suggesting only that it was done to ensure potential appointees were in line with gun laws.

"The intent of the gun question is to determine legal permitting," said one transition aide.

But even some Democrats and transition experts are baffled by the inclusion of the question.

Tucked in at the end of the questionnaire and listed under "Miscellaneous," it reads: "Do you or any members of your immediate family own a gun? If so, provide complete ownership and registration information. Has the registration ever lapsed? Please also describe how and by whom it is used and whether it has been the cause of any personal injuries or property damage."

Paul Light, professor of public service at New York University, said there was no such question for potential appointees when President George W. Bush took office in 2000.

"It kind of sticks out there like a sore thumb," Light said.

He expressed uncertainty over why it was included but surmised it was out of an abundance of caution, a desire to avoid the spectacle of a Cabinet-level or other high-ranking appointee who is discovered to have an unregistered handgun at home.

"It's the kind of thing that, if dug out, could be an embarrassment to the president-elect," Light said.

Clay Johnson, deputy director of management at the Office of Management and Budget and the head of Bush's 2000 transition, also didn't quite understand the purpose of the question.

"It could be their way to say to prospects that they will have to answer all these questions sooner or later, so be prepared," Johnson observed.

Matt Bennett, a veteran campaign operative who did a stint at Americans for Gun Safety and who now works for the moderate Democratic think tank Third Way, was equally befuddled.

"It strikes me as overly lawyerly," he said, noting that only a small percentage of guns owned by adults are ever used improperly.

"Given the behavior of the vice president under the last administration, you may want to know these things," Ryan said.

On a more serious note, Ryan suggested that the new president was being "very, very thorough" in his approach.

An Obama ally and pro-gun Democrat from a blue-collar region of Ohio, Ryan dismissed the notion that the inclusion of such a question would do any political harm to the incoming president.

But other gun rights supporters want Obama to know the question has raised their antennae.

"It's very odd and very concerning to put out a question like that," said Sen. Jim DeMint (R-S.C.), adding that it may also be "unprecedented."

The freshman senator, who is up for reelection in 2010, had his campaign organization send an e-mail to supporters this week, pledging to enact legislation to bar federal hiring discrimination on the basis of gun ownership.

"Barack Obama promised change, and this is proof positive that we are gong to see some of the most liberal change in our nation's history," wrote DeMint's campaign in the e-mail.

DeMint conceded it was unrealistic to try to get a bill on the matter through during the lame duck session this week.

Still, it's the sort of symbolic issue that may provide a political opening for Republican members of Congress from conservative-leaning states to contrast themselves with the new Democratic administration.

The NRA, the gun-rights group that spent millions to defeat Obama, only to see him easily carry sportsmen-heavy states such as Michigan and Pennsylvania, is signaling that it intends to keep up the fight.

"Barack Obama and his administration are showing their true colors and true philosophy with regard to the Second Amendment," said Chris Cox, the NRA's top political official. "It shows what we've been saying all along - this guy doesn't view the Second Amendment as a fundamental constitutional right."

Cox said the group had put the word out to their members on the question.

Bennett, though, argued that approach would have little resonance.

"The real question is whether he's doing harm to the broader image of Democrats on guns, and the answer is probably no," he said. "It may gin up 350,000 hard-core NRA types, but it won't really bother 65 million other gun owners."
By Jonathan Martin