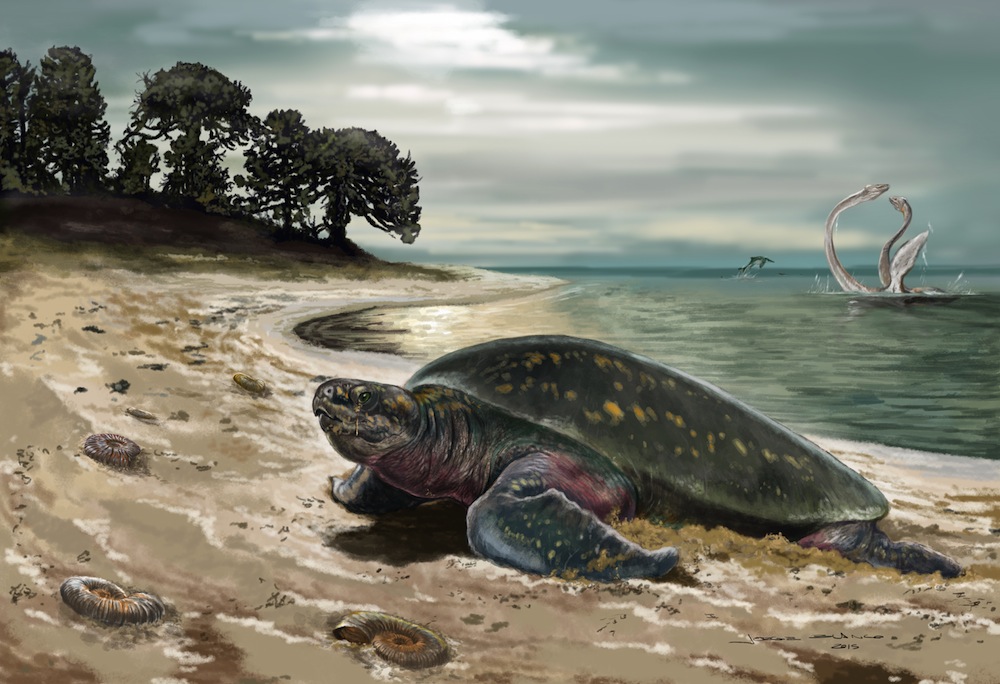 The world's oldest sea turtle fossil shows the ancient animal swam the oceans at least 120 million years ago, when dinosaurs still roamed the Earth, according to a recent analysis.

The now-extinct Desmatochelys padillai turtle skeleton was found in Villa de Leyva, Colombia, and is 25 million years older than the Santanachelys gaffneyi turtle from Brazil that previously held the record for the world's oldest sea turtle fossil.

The D. padillai specimen was dug up by hobby paleontologist Mary Luz Parra and her two brothers in 2007. However, it wasn't until Edwin Cadena, a researcher at the Senckenberg Research Institute and Natural History Museum in Germany, and James Parham, an assistant professor of geological sciences at California State University, Fullerton, inspected it that the fossil was determined to be the oldest sea turtle specimen in the world, dating back to the Cretaceous period, between 145.5 million and 65.5 million years ago. [Image Gallery: 25 Amazing Ancient Beasts]

"The cool thing about this turtle is that it's really old, but it's not very primitive," Parham told Live Science. Though the specimen is at least 120 million years old, the turtle doesn't look like an ancient species that was early on in its evolution, and instead is "very specialized," he added. This suggests there could be older sea turtles still to be found (if they are preserved), the scientists said.

The finding also suggests that turtles could have evolved to become sea dwellers more than once throughout history, the researchers said. In fact, because D. padillai is so old but doesn't look primitive, it might not be related to modern sea turtles. Rather, it might have evolved to live in the sea, and then other turtles later evolved in the same way from a separate ancestor, they said.

Parham said there has been some resistance to this idea from other scientists. However, it shouldn't be an altogether surprising theory, he added, because mammals, reptiles and other animals evolved separately several times to produce a variety of sea-dwelling animals.

For instance, mammals advanced many times to become sea creatures like dolphins and seals, and they came from different ancestors. The researchers think it's likely that turtles did the same, and evolved several times with different descendants to live in the sea. Some sea turtles became ones like D. padillai, while others evolved independently to become the modern turtles that live in the sea today.

To determine the fossilized turtle's age, the researchers examined the invertebrates, called ammonites, preserved in the rocks and sediment around the turtle. Ammonites were widespread throughout the Cretaceous period, which means they can be used to figure out how old the surrounding rock is, Parham said.

The finding that the turtle lived during the Cretaceous period could help shed light on sea turtle history, the researchers said. The exact point that turtles split into sea dwellers and land dwellers has been difficult for researchers to identify. There are few turtle fossils from this period, so every specimen is important for understanding the story of how sea turtles evolved.

The researchers haven't yet conducted tests to determine whether the D padillai fossil evolved independently from modern-day turtles, but paleontology labs around the world are studying the idea.

"We're trying to figure out how turtles who lived over 100 million years ago are related," Parham said. "It's not easy!"

Some partial remains of D. padillai were originally discovered and dug up in the 1940s in Colombia, but were not studied for many years. For Parham, the new research comes full circle, because he was first introduced to these fossils when he was in graduate school at the University of California, Berkeley. Now, 18 years later, he realizes the fossil's significance.

The new finds dug up in 2007 had better location data, which allowed the researchers to date the turtle more accurately.

"It was really exciting that this turtle that I kind of knew about, was somewhat familiar with, and then all of a sudden, it was like, 'Hey, we've got new skeletons, and by the way, they're super old,'" Parham said. "If I had known how old the specimens at Berkeley were in 1996, I would have included them in my dissertation, for sure."

The new study was published online this month in the journal PaleoBios.