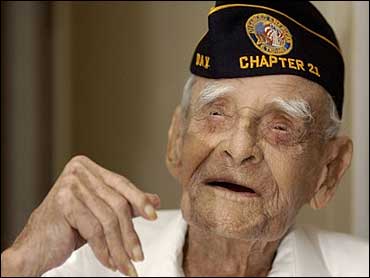 The world's oldest person, Emiliano Mercado Del Toro, died Wednesday at his home on the northern coast of Puerto Rico, a relative said. He was 115.

Mercado del Toro died at his home in the town of Isabela, about 70 miles west of San Juan, of natural causes, his grandniece, Dolores Martinez, told The Associated Press.

Mercado del Toro had been having difficulty breathing recently but was conscious and alert shortly before his death, Martinez said outside the family home.

At his death, he was with a great-grandnephew and a caretaker, she said.

Mercado Del Toro, who was born in Puerto Rico when it was still a Spanish colony, was drafted into the U.S. Army in 1918 but did not serve in combat because World War I ended while he was still in training. Later, he worked in the island's sugar cane fields.

He was married three times but never had children.

In Isabela, Mercado del Toro was a local celebrity after he was recognized by Guinness World Records for his longevity.

"We're all crying, but we knew this day would come," said town spokeswoman Rosa Luciano.