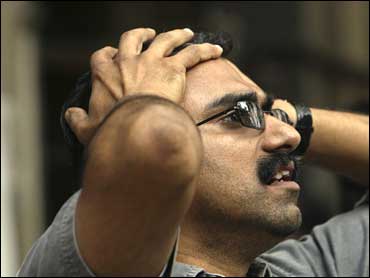 World stock markets turned sharply lower Monday after a double-fisted blow from Wall Street - news that Lehman Brothers had filed for bankruptcy and Merrill Lynch would be sold to Bank of America.

In Russia, where stocks were already suffering from falling oil prices and worries about political interference in business, the MICEX index was down 6.2 percent and RTS index was 4.8 percent lower.

"In the short term, we are looking at a fresh wave of weakness hitting financial markets," said Chloe Magnier, chief economist at Saxo Bank in Paris. "I'm not optimistic about the coming months."

Bond prices surged as investors fled to the security of government debt. The yield on the benchmark 10-year Treasury note, which moves opposite its price, plunged to 3.54 percent from 3.72 percent late Friday. The dollar was lower against other major currencies, while gold prices rose.

Europe's major central banks moved quickly to calm markets Monday, pumping billions of euros and pounds into the financial system. The European Central Bank loaned euro30 billion but said it received 51 bids for euro90.3 billion (US$127 billion) on its one-day tender with a bid rate of 4.25 percent - a clear sign that demand for cash is over the top.

Similarly, the Bank of England offered up 5 billion pounds (nearly US$9 billion, euro6.4 billion) in a three-day auction - but bids were nearly five times higher, at 24.1 billion pounds. (euro30.4 billion; US$43 billion)

The 158-year-old Lehman Brothers Holdings Inc. filed Monday for Chapter 11 bankruptcy. The company was crippled by US$60 billion (euro43 billion) in soured real-estate holdings and unable to find an investment partner to throw it a lifeline.

Officials from the government and various banks failed to find a solution during weekend meetings. During the talks, when Bank of America balked at buying Lehman, the government urged it to buy investment bank Merrill Lynch instead.

The US$50 billion (euro36 billion) deal may stop speculators whose next target after Lehman would have been Merrill, according to Stephen Pope, chief global market strategist at Cantor Fitzgerald Europe in London.

The moves will create a "firebreak in the financial structure," and once disappointment that Lehman didn't manage to make a deal has been digested, stocks will start to recover, he said.

"You are going to have a torrid day today, probably tomorrow as well, but then I think people are going to start thinking there's some opportunity out there to be engaged," he said.

Before that, markets also have to react to a possible restructuring of the world's largest insurance company, American International Group Inc. AIG's troubles a week after its stock dropped 45 percent are perhaps most worrisome for some investors because of the company's enormous balance sheet - and the risks that its troubles could spill over to its customers.

Asia's biggest stock exchanges in Japan, Hong Kong and South Korea were closed for holidays, but every market open closed deep in the red.

In Latin American markets also plunged, with Brazil and Argentina falling the hardest, with 6.2 percent and 3.28 percent drops. In Mexico, the market slipped 1.94 percent, while in Chile stocks were down 0.8 percent.