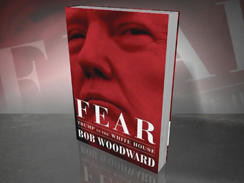 Watergate journalist Bob Woodward's new book "Fear: Trump in the White House," published Tuesday (by Simon & Schuster, a division of CBS), has attracted widespread attention for its depiction of a White House in chaos. Mr. Trump has lashed out against the book, variously calling it "a joke," "fiction," and "a scam."

Here are some of the most memorable moments from the book:

Former White House economic adviser Gary Cohn, spying the draft letter ending the U.S.-South Korea Free Trade Agreement on Trump's desk, took the letter and put it in a "KEEP" folder -- as in, to keep away from Mr. Trump, who never noticed the letter was missing. Eventually, the draft had landed on his desk through "an unknown channel," meaning that it hadn't been prepared by Rob Porter, the staff secretary. Porter also discovered that there were "multiple" copies of the letter, and the book says that he and Cohn swiped all of them from Trump's desk. Woodward included the draft letter in his book.

"It's not what we did for the country...It's what we saved him from doing," Cohn reportedly said.

More often than stealing documents, though, Porter "10 times" more often made up legal excuses not to do what Mr. Trump asked, Woodward reported. Cohn and Porter, according to Woodward, then tried to wait out the president, hoping he'd just forget about the letters and documents they didn't want him to sign.

On Tuesday, Porter disputed Woodward's characterization as a "selective and often misleading portrait" and seemed to suggest that Woodward had somehow misconstrued what he had been told about the trade document. "The suggestion that materials were 'stolen' from the president's desk to prevent his signature misunderstands how the White House document review process works," Porter said in a statement.

Woodward's book, if correct, shows that the majority of his most trusted advisers had little confidence Donald Trump would weather the scandal of the "Access Hollywood" tape. In October, the tape, published by the Washington Post, revealed Mr. Trump in conversation with host Billy Bush over a decade earlier, in 2005, bragging that with his celebrity, women allow him to "grab them by the p****."

Reince Priebus strongly advised Mr. Trump to drop out because he had lost Republicans -- from leadership to rank and file, and he informed him that Mike Pence and Condoleezza Rice were ready to step onto the ticket. Former strategist Steve Bannon calls the idea "f****** absurd" because the polling gap had been cut "in half" since he had started running the campaign. Rudy Giuliani estimates he has under a 50 percent chance of winning.

Kellyanne Conway proposed a kind of TV Hail Mary -- a confessional interview with candidate Trump seated on a couch between his wife and daughter, crying and apologizing. Woodward says Melania Trump waved her hand "dismissively" and said, "Not doing that...No way. No, no, no."

Trump:  "It's all Jeff Sessions' fault"

Mr. Trump wanted to fire Comey early on in the administration.

Bannon advised him against it, saying, "Seventy-five percent of the agents do hate Comey. No doubt. The moment you fire him he's J. f****** Edgar Hoover. The day you fire him, he's the greatest martyr in American history. A weapon to come and get you. They're going to name a special f***ing counsel. You can fire Comey. You can't fire the FBI. The minute you fire him, the FBI as an institution, they have to destroy you and they will destroy you."

In a fit of paranoia, Mr. Trump said, "They're out to get me. This is an injustice. This is unfair. How could this have happened? It's all Jeff Sessions' fault. This is all politically motivated. Rod Rosenstein doesn't know what the hell he is doing. He's a Democrat. He's from Maryland." (Rosenstein is a Republican.)

Meanwhile, Sessions, whose regularly been on the receiving end of the president's public attacks, at one point told Bannon, "I'm never quitting."

"Little Rocket Man," Woodward shows Mr. Trump musing. "I think that may be my best ever, best nickname ever."

"This is all about leader versus leader. Man versus man. Me versus Kim."

The tweeter-in-chief weighed in on the social media site's move to change its character count from 140 to 280 characters: "...it's a bit of a shame because I was the Ernest Hemingway of 140 characters."

Trump on Charlottesville: His biggest mistake

Mr. Trump regretted making the speech about the violent clashes with White supremacists in Charlottesville, Virginia at the White House days after he made the remarks in New York.

"That was the biggest f****** mistake I've made… you never make those concessions. You never apologize. I didn't do anything wrong in the first place. Why look weak?" "That's the worst speech I've ever given. I'm never going to do anything like that again."

Dowd on Trump prepping for Mueller

John Dowd, the president's former personal lawyer, described to Mueller in a meeting how Mr. Trump had responded to three interview questions. Dowd said Mr. Trump had no clue on the third question. "He just made something up. That's his nature." Dowd told Mueller he didn't want Mr. Trump looking like an idiot. Dowd was aware he had illustrated the president was "clearly disabled."

"'Mr. President, I cannot, as a lawyer, as an officer of the court, sit next to you and have you answer these questions when I full well know that you're not really capable,'" Dowd told Trump.

Mattis and the Sunday shows

Former White House press secretary Sean Spicer tried repeatedly to get Secretary of Defense James Mattis to do an interview with a Sunday broadcast show, and Mattis repeatedly refused.

Finally, he told Spicer, "Sean, I've killed people for a living.  If you call me again, I'm going to f****** send you to Afghanistan."

Trump to Giuliani: "You're like a little baby that needed to be changed"

In a separate Sunday show debacle, it became clear that no one but Mr. Trump's attorney and former New York City Mayor Rudy Giuliani would go on Sunday shows. After getting battered on five Sunday show appearances, Mr. Trump calls Giuliani "a baby" and says, "I've never seen a worse defense of me in my life."

"They took your diaper off right there. You're like a little baby that needed to be changed. When are you going to be a man?", he lambasted. Mr. Trump then called him "weak" and says he's "lost it."