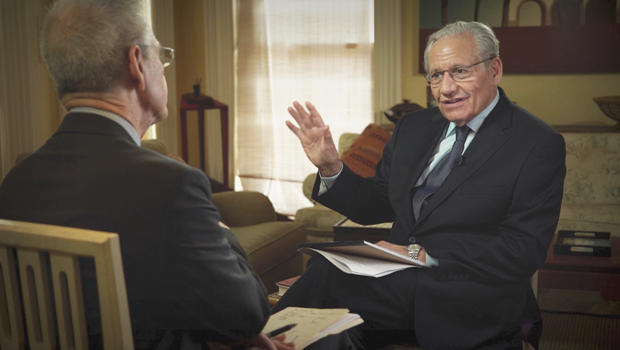 Watergate journalist Bob Woodward made headlines once again this past week, with his new book about the Trump White House, entitled "Fear." This morning, in his first TV interview, Woodward paints a picture for our David Martin of an administration in disarray:

"You look at the operation of this White House and you have to say, 'Let's hope to God we don't have a crisis,'" said Bob Woodward.

For the Washington Post reporter, that is the bottom line to all the jaw-dropping chaos and discord described in his new book, "Fear: Trump in the White House" (published by Simon & Schuster, a division of CBS).

"People who work for him are worried ... that he will sign things or give orders that threaten the national security or the financial security of the country, or of the world," Woodward said.

Aides like then-Chief Economic Adviser Gary Cohn and White House Staff Secretary Rob Porter literally stole documents off the president's desk in the Oval Office, such as a letter terminating a trade agreement with South Korea, so that, Woodward explained, Mr. Trump could not sign them: "Because they realized that this would endanger the country."

Martin asked, "How'd they get away with that?"

"[Trump] doesn't remember. If it's not on his desk, if it's not immediately available for action, it goes away."

Unelected officials like Cohn and Porter intentionally thwarting the actions of the elected president – the exact reverse of what a White House staff is supposed to do.

Going back to Richard Nixon and Watergate, this is the ninth White House Woodward has covered. "In the eight others," he said, "I never heard of people on the staff in the White House engaging in that kind of extreme action."

In Woodward's telling, President Trump does not see America as the indispensable nation; he sees it as an international sucker taken advantage of by allies and trading partners. He complained his advisors "don't know anything about business. All they want to is protect everybody … that we pay for."

According to Woodward, the president is obsessed by the fact that the U.S. pays $3.5 billion a year to station troops in South Korea as a first line of defense against the North. "I don't know why they're there," he said at one meeting. "Let's bring them all home." At another meeting, Secretary of Defense James Mattis starkly why the U.S. has 28,000 troops in Korea: "We're doing this in order to prevent World War III."

"The United States has great strength and patience, but if it is forced to defend itself or its allies, we will have no choice but to totally destroy North Korea." - President Trump at the United Nation, Sept. 19, 2017

The standoff with North Korea has been eased, for the moment, by the Singapore Summit, which brought together two leaders who had been trading nuclear threats and schoolyard insults.

Trump: "'Rocket Man' is on a suicide mission for himself and for his regime."

The president later made that "Little Rocket Man" on Twitter, which he told Rob Porter "may be my best ever." When Porter asked if it might provoke Kim, according to Woodward, the president replied, "It's leader versus leader, man versus man, me versus Kim."

The most dangerous moment of the standoff, Woodward says, came when the president went to work on another tweet: "He drafts a tweet saying 'We are going to pull out dependents from South Korea  ... Family members of the 28,000 people there.'"

That tweet was never sent, because of a back channel message from North Korea that it would regard a pullout of dependents as a sign the U.S. was preparing to attack. "At that moment there was a sense of profound alarm in the Pentagon leadership that, 'My God, one tweet and we have reliable information that the North Koreans are going to read this as an attack is imminent,'" Woodward said.

The president surrounded himself with generals – active duty and retired – all of whom had served in Afghanistan. But before he decided on a new Afghan strategy, he insisted on meeting with enlisted men who had served there as well. In a meeting the next day, he lashed out at the generals: "I don't care about you guys," he said to Mattis, Joint Chiefs Chairman General Joseph Dunford, and then-National Security Adviser H.R. McMaster. "'The soldiers on the ground could run things much better than you,' he says to Mattis and Dunford, and there is a 25-minute dressing down of the generals and senior officials," said Woodward.

In a recent tweet, the president acknowledged: "I'm tough as hell on people and if I weren't nothing would get done."

When he didn't like a trade deal Commerce Secretary Wilbur Ross had negotiated with China, the president lit into him at a White House meeting: "It's a terrible deal. We got screwed. ... You're past your prime. You're not a good negotiator anymore. ... you've lost it. I don't trust you."

When Economic Adviser Gary Cohn was upset over the president's reluctance to condemn white supremacists for the violence in Charlottesville he went into the Oval Office to resign. According to Woodward, "Trump said, 'You can't resign. I need you to do tax reform. If you leave, this is treason.' And Trump talked him out of resigning."

Afterwards, Chief of Staff John Kelly, who had been in the room, pulled Cohn aside: "Cohn wrote this down, quote from General Kelly: 'If that was me I would have taken that resignation letter and shoved it up his *** six different times.'"

The president has been bracing for Woodward's book since last month when the two lamented – or at least pretended to lament – that they had not talked.

Woodward recorded the phone conversation, with the president's permission:

Trump: "It's really too bad because nobody told me about it, and I would've loved to have spoken to you. You know I'm very open to you. I think you've always been fair."
Woodward: "It's a tough look at the world and your administration and you."
Trump: "Right. Well, I assume that means it's going to be a negative book. ... That's all right.  Some are good and some are bad.  Sounds like this is going to be a bad one."

Last week, when the contents of "Fear" began to leak ahead of its scheduled publication, the president said it was worse than bad. "The book is a work of fiction," Mr. Trump argued. "If you look back at Woodward's past, he had the same problem with other presidents. He likes to get publicity, sell some books."

Martin said, "He's added 'fake books' to his complaints about 'fake news.' Are you ready for a tweetstorm directed at you?"

"I've been there before," Woodward replied.

Working on this book, Woodward says he went back to the days of his youth when he and Bernstein made late-night visits to the homes of potential sources.

He doesn't identify his sources, but most readers will conclude he talked to both Gary Cohn and Rob Porter, along with several other White House officials who quit or were fired.

Martin said, "The criticism would be, 'You've talked to the people who have an axe to grind against the president.'"

"Well, that's just not true," he replied. "Look, I talked to dozens and dozens of people, and have notes and documentation on lots of things."

Woodward quotes harsh criticism of the president from some of his closest advisers. Chief of Staff Kelly called his boss an "idiot."  Secretary of Defense Mattis said the commander-in-chief acted like, and had the understanding of, "a fifth- or sixth-grader."  Both men have denied saying such things.

Woodward said, "He's wrong, and my reporting is meticulous and careful."

In a second interview with CBS' "Sunday Morning," Woodward said he had multiple sources for every claim in the book: "Multiple interviews with key witnesses. One person I interviewed nine times, and the transcripts of those conversations are 700 or 800 pages."

"How many people did you interview?"

"Over a hundred. I would say that maybe half of those are key people."

The theme of Woodward's book – that aides fear what the president might do if allowed to follow his impulses – received an unusual confirmation last week, when The New York Times published an anonymous article written by a person described as "a senior official in the Trump administration."  "I work for the president, but like-minded colleagues and I have vowed to thwart parts of his agenda and his worst inclinations," he or she wrote.

When asked if he knows the author's identity, Woodward said, "I have no idea who it is. It's very important, who it is. It's very important whether this is somebody who witnessed and participated. And quite frankly, if there was a person in the White House or the administration who wanted to tell me what's in that op-ed piece, I would say, 'Okay, name me who was there. What is the specific incident?' As you know, from having read my book, the dates and times and participants [are documented]."

He said that without that detail on the op-ed author's story, "I wouldn't have used it."

"Fear: Trump in the White House" is Woodward's 19th book, and he says reporting it took him deeper inside a working White House than he's ever been before.

"This one was in the belly of the beast," he said.

Martin asked, "And what did you conclude about the beast?"

"That people better wake up to what's going on."

The Freemasons are the world's most well-known secret society, and are the subject of countless parodies and conspiracy theories