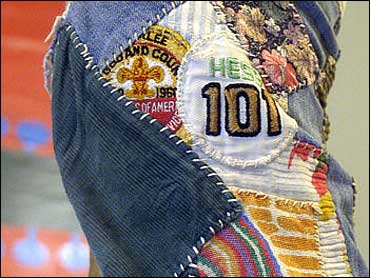 Steve Shashok was a lanky, long-haired 21-year-old when he went to Woodstock. Through three days of music and mud, he wore the same bell bottoms covered with a crazy quilt of colored and corduroy patches.

The pants are now history — officially.

The multi-patched jeans are being displayed at the New York State Museum among dozens of evocative artifacts from the 1969 concert: ticket stubs, a leather head band, programs, a New York Daily News headlined "TRAFFIC UPTIGHT AT HIPPIEFEST" and a conga drum. The artifacts came from a few dozen of the 400,000 attendees who answered a recent call to lend personal bits of hippie history for the exhibit.

The thought of Woodstock in a museum might send baby boomers to the mirror to count gray hairs. But the concert was an iconic event in New York's history, said museum Director Cliff Siegfried. And museum curator Ron Burch said it meets a crucial acid test of historical events: People remember where they were when they heard about it.

The museum put out a call for Woodstock memorabilia in March to augment an exhibit by concert photographer Elliott Landy. Along with a bunch of tickets, the museum also received a few dozen items from the army of former young people who showed up on Max Yasgur's farm in Bethel, N.Y. for a long weekend in August 1969.

Behind every item was a story.

Shashok, then a college student in the Albany area, hopped in a friend's car wearing the bell-bottoms with the hand-stitched patches. He watched Jefferson Airplane in the pants.

As Shashok grew less lanky and began wearing his hair shorter in the years since, he still could not part with the trousers.

"The kids say `Daddy, keep your pants.' So we have. In my lifetime, we'll probably keep them at home so they can be paraded out every now and again," he said.

Also set for display is a severely yellowed, mud-flecked copy of Norman Mailer's book "Armies of the Night," which details a protest march on Washington. The book came to Woodstock jammed in the back pocket of 14-year-old Robert Swidler, a New York City boy summering nearby.

Swidler went to Woodstock with his older brother. It was his first concert, and he thought every concert would be just like it. Swidler read the book during down times between acts.

"I just carried it in my back pocket. It got all filled with Woodstock mud. Went back home put it on the bookshelf. Fast forward 35 years later, I heard they were looking for some artifacts," Swidler said.

The most conspicuous piece is a blanket-sized montage painting heavy on iridescent orange and featuring Jimi Hendrix and corporate-looking men in suits. Julie Lomoe came up from Manhattan to enter her painting in a competition at the concert and won second prize.

Lomoe won $50 or $75, she can't remember. But she does remember the crush of the crowd and the nonstop music — particularly The Who's pre-dawn performance of "Tommy."

"They started in the dark. By the time they finished the set, the sun had come up. I remember Roger Daltrey was in white leather," she said. "It was all very dramatic and beautiful."

Lomoe, 62, says she's proud her painting is in an exhibit 35 years later, but she's a bit melancholy, too.

"It's a little strange because it does make me think of my age and directions I didn't take, you know, the path not taken."

Lomoe writes now; she moved upstate from Manhattan long ago, her life inevitably changed over the decades. Swidler is a lawyer for a health care company with a 14-year-old son of his own. Shashok works in the audiovisual department for the museum.

The most abrupt post-Woodstock change might have been experienced by David Beemer, who helped figure out latrines and other concert details as assistant director of operations. His loan to the museum included a pay stub from Woodstock Ventures Inc. for $43.48.

Beemer wrote a recollection describing how he stayed on the job for a week cleaning up after the concert.