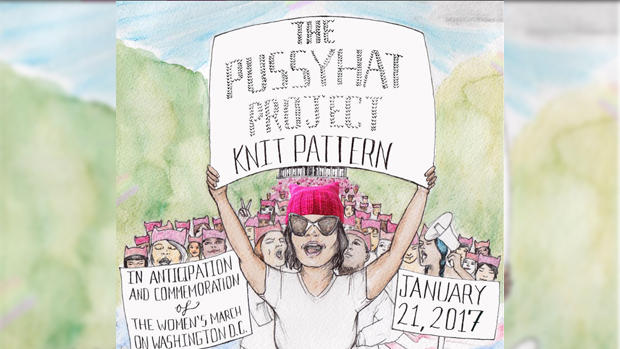 In the days following Donald Trump’s election as president of the United States, an idea for a march on Washington timed with his inauguration began circulating on social media. It didn’t take long for organizers and volunteers to jump on board and start planning a protest for January 21st, 2017 — the day after Trump is sworn in as the 45th U.S. president.

Now, more than 165,000 people say they plan to participate in the Women’s March on Washington, which is just one of many events planned throughout inauguration weekend. And if the Pussyhat Project has anything to say about it, those marchers will be wearing handmade “pussy power hats.”

“I knew immediately I would go the Women’s March, but wanted to make an impact there,” said Krista Suh, who started the Pussyhat Project along with her friend Jayna Zweiman. Suh, who lives in California, thought of the cold temperatures in Washington, D.C. in January and decided to design a hat with her knitting teacher, Kat Coyle. They settled on a simple but distinctive knitting pattern with cat ears, and the attention-grabbing name came naturally after that.

The founders say the project is more than just a tongue-in-cheek reference to the president-elect’s infamous “grab them by the p****” comments. “It’s about reclaiming that word, it’s not just about trolling him,” Suh said.

They launched the Pussyhat Project over Thanksgiving weekend. With a website and Instagram account, the movement has gone viral among women and men who were unhappy with the election’s outcome and wanted to make a colorful statement about it. “At the core we really want to empower people everywhere. You don’t have to think of yourself as a political activist to be politically active,” Suh told CBS News.

People of all ages and backgrounds have gotten involved, from a 99-year-old woman to a 7-year-old first-time knitter. The organizers say one man even made 100 hats for the cause. Suh estimates at least 60,000 hats have been made based on site traffic, but it’s tough to gauge just how many people have done so or how many hats each made.

The Women’s March isn’t the only demonstration taking place on inauguration weekend. The DC Cannabis Coalition says it will give away 4,200 joints before Trump’s swearing in, then plans to light up on the National Mall at exactly 4 minutes and 20 seconds into his speech (420 being a code for marijuana). Their efforts are meant to send a message that it’s time to legalize pot at the federal level. It’s already legal to possess up to two ounces in D.C. — but smoking it on federal property is not legal. That means participants could be risking arrest.

Bikers for Trump, a group that has previously promoted itself on social media as extra protection at Trump events, also plans to roll in for Trump’s inauguration. The group’s founder, Chris Cox, posted a video on Facebook detailing the group’s plans to meet at a park and hopefully send 500 bikers to ride in the inaugural parade.