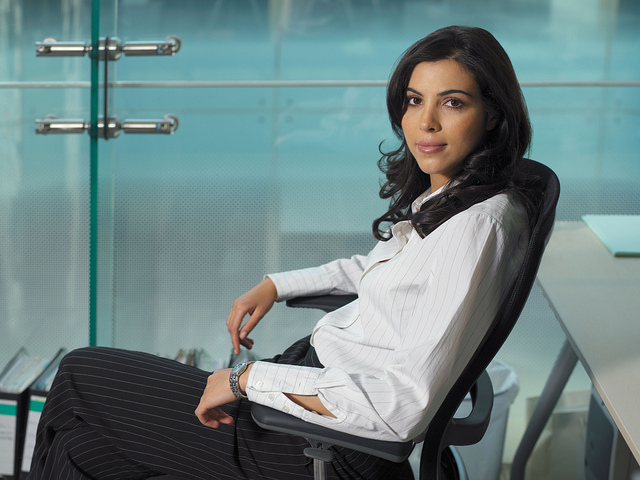 Even as women have moved up the economic ladder and outpaced men in earnings growth over the last decade, they are lagging behind in a crucial area -- getting new jobs.

Cry me a river.

And I say this as a bona fide woman. Most of the jobs lost in the recession were manufacturing jobs, an area dominated by men. So, is anyone shocked that as manufacturing has picked up, men's jobs have picked up as well? No? Good.

Of course, men haven't stayed in their own sphere of manufacturing but have (shockingly) taken jobs that were previously seen as the domain of women: retail. Again, from the LA Times:

Men are grabbing a bigger share of jobs in areas, such as retail sales, that typically have been the province of women, federal data show. That's not necessarily good news for women or men. So-called women's work often pays less and offers skimpier benefits and less opportunity for advancement than the jobs men previously held.

So, men are "grabbing" (a term that oozes unfairness) the bad jobs and this is still bad for women. Yes, it is bad for person A if person B gets a job that person A wants. But, in an attempt to show the unfairness of the situation, the LA Times gives stories of choices, not discrimination or oppression of women. And, in fact, show a man actively supporting a woman so that she can do things like go back to school. For instance:

Paul Cordova and his wife, Betty Mowery, a 40-something San Francisco couple, found that out in short order. Three days after Cordova lost his job managing facilities at a San Francisco law firm in April 2009, Mowery was laid off as a customer service representative at an air freight company. Cordova got a new job working as a clerk in a grocery store, but, at $9 an hour, it paid much less than his previous job. Mowery couldn't find any job and finally stopped looking. She went back to college this year to retrain for a career in mental health.

So, both lose jobs (and as long as we're talking about gender here, why write "[man] and his [wife]" instead of [woman] and her [husband]?) and the husband goes back to work in a low paying job, supporting a wife who undoubtedly had to take out student loans for which they will both be responsible for repaying, in order to retrain. It says she couldn't find a job, but the reality is she didn't find a new job because she stopped looking to go back to school. Most likely at great cost to whom? The man who is supporting her.

The further examples show a man willing to do anything and women having stress about possible career change. They quote a man who lost his job as saying, "I decided to do what I had to do to keep the family going forward." That included taking whatever job he could find, even if it was a part time museum job.

On the other hand, the women profiled are described as only applying for jobs within the same area, with one saying, "Outside of education, I'm not sure how I would do," she said. "I'm scared to go out in the job market because I don't know what I'm going to be facing."

As if the man who took the museum job just had it handed to him on a silver platter and didn't have any fears about changing industries.

They had different results in the recession because they took different actions.

While it is absolutely true that women have been hit hardest in the past few years, men were hit hardest first. The longer you've been out of work, the more willing you are to take a job that isn't perfect. And as for jobs in the professional realm (not in manufacturing nor retail), women are better poised to continue taking over there.

Where historically men have been more likely to finish college, since 1991 the share of women ages 25 to 29 with a bachelor's degree or higher has exceeded the share of young men with the same credentials ... And the gap has widened in recent years due to stagnation in the rate of young men earning degrees. Moreover, this phenomenon is present among all major race and ethnic groups. Women not only represent a majority of young adults enrolled as college undergraduates, but they also are now nearly three-fifths of graduate students.

So, unemployment is a terrible thing, regardless of what gender you are. But this is not a case of women suffering more than men. Men are still lagging behind. If the Los Angeles Times wishes to find an area of unfairness in unemployment, perhaps they could examine unemployment by race -- where Asians have an unemployment rate of 6.2 percent compared to 14.4 percent in Blacks/African Americans. That sounds a lot more unfair than the gap between men and women.