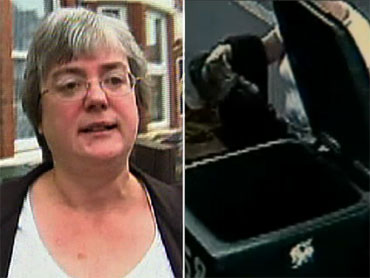 When his missing cat, Lola, was found in a trash bin, howling in distress, Darryl Mann, of Coventry, England, checked the surveillance video from a security camera outside his house.

On the tape, Mann saw a woman pause to stroke the cat, then inexplicably drop it in the bin.

CBS News correspondent Richard Roth reported on "The Early Show" the cat was trapped in the trash container for 15 hours.

Mann told reporters, "I don't know how anyone could, you know, go to bed and sleep at night knowing they've just locked a cat in a wheelie-bin; I just, you know, I don't know what was going through her head at the time."

Mystified by the random act of cruelty that turned his cat into kitty litter, Mann posted the video on Facebook, where it didn't take long to stir online outrage, even death threats aimed at the middle-aged woman from the middle of England ultimately identified as 45-year old Mary Bale, who works at a local bank.

Bale told the tabloid The Sun, "It was a split second of madness."

The Dangers Of Flip-Flops ... In Footwear!

She explained to the paper, "I thought it would be funny." And anyway, she added, "It's just a cat."

Now police and the Society for the Prevention of Cruelty to Animals are investigating.

Lola, according to her owner, is tired, but fine.

To see the surveillance tape of the cat being dropped in the trash bin, click on the videos below.