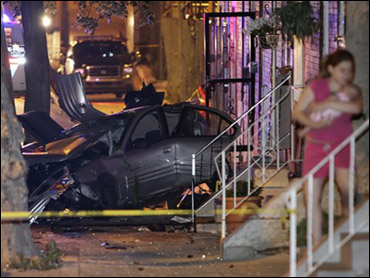 A woman has died after being hit by a car that crashed into a crowd during a police chase and killed three young children, at least one of them hers.

Police Commissioner Charles Ramsey says Wednesday night's crash in the city's Feltonville neighborhood began with two men stealing a motorcycle at gunpoint. One man fled on the motorcycle, and the other sped away in a car.

Police were pursuing the car when it jumped the curb and hit the crowd in front of a house. All the children killed were under age 10.