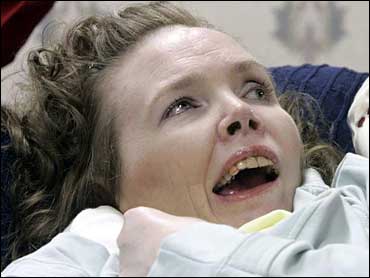 For 20 years, Sarah Scantlin was seemingly unaware of the world around her after she was hit by a drunk driver in an accident that sent her into a comatose state in September of 1984.

Then in February, she shocked her parents and doctors when she began to speak. In her first national television interview, after undergoing surgery on her long-unused limbs and speech therapy to unlock her long-dormant tongue, Scantlin speaks with The Early Show national correspondent Tracy Smith in a two-part interview to be broadcast Thursday and Friday.

Smith also speaks with Sarah's parents, Jim and Betsy Scantlin, who never imagined they would talk to their daughter again.

In a February interview on The Early Show , Sarah's father recounted the phone call he and his wife got, informing them of the unimaginable.

"It was amazing. I'm in the living room. Betsy was in the computer area, and the phone rings ... and suddenly, I'm aware that there's a profound, distinct difference. Rather than speaking about Sarah, it became very clear she [Sarah's nurse] was speaking to Sarah. It was the most amazing feeling in the world," he said.

The 1984 accident occurred when Scantlin was crossing the street in her hometown of Hutchinson, Kan. She suffered a massive brain injury and could not breathe on her own. Smith speaks with New York neurologist Randolph Marshall, who says that people like Scantlin rarely awake from such an injury. "You only hear about these cases very rarely and they're always a surprise when they actually come to light," he says.

However, it seems that throughout her 20-year coma, she could see, hear, and understand what was going on around her. Shortly after she awoke, her father asked what she knew about events that had occurred years earlier.

Smith says there are other things deep in Scantlin's brain that also survived the accident, such things as her favorite 1980s song "Summer Lovin'," which she even sings for The Early Show.