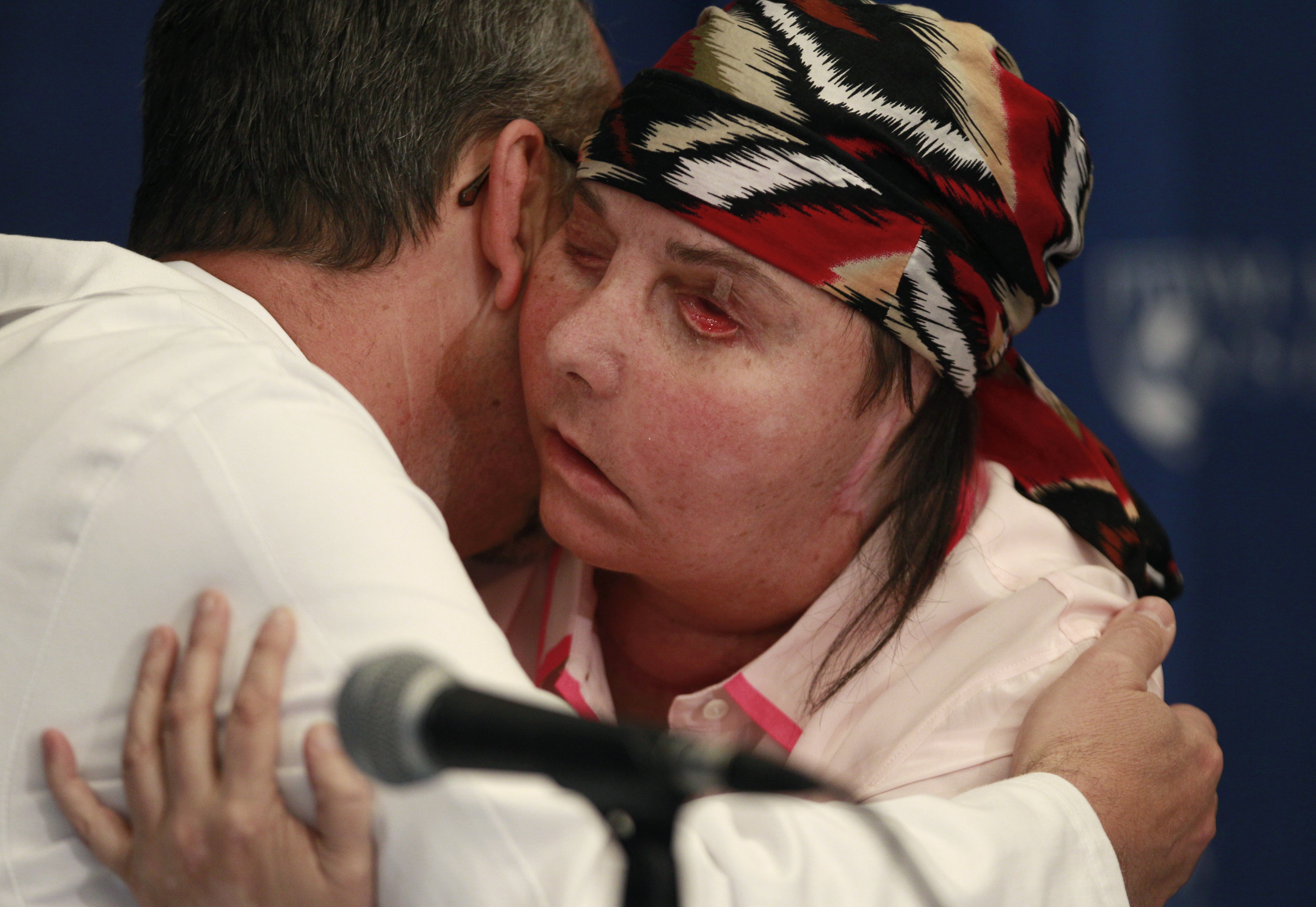 Thanks to a generous gift from a donor and her family, a woman who was viciously attacked and disfigured by her former husband has a new face.

"I feel great appreciation and gratitude for the tremendous gift that I've been given," Carmen Blandin Tarleton, 44, of Thetford, Vt. said at a press conference Wednesday at Boston's Brigham and Women's Hospital, where she received the face transplant two months earlier. "My spirits are high, and I feel really good and happy."

On June 10, 2007, Tarleton was beaten and doused with industrial strength lye by her ex-husband. She sustained burns over 80 percent of her body including her face.

She underwent 38 surgeries within three months of the incident, and then an additional 17 surgeries over five years, some of which to restore her sight. She still remains legally blind, and the scars cover her body. Because of the scar tissue in her mouth, she was unable to control her lips and had problems drooling. In addition, the scars on her neck made it difficult for her to turn her head and lift her chin. The tightness of the scars left her in pain.

Tarleton was screened and approved for a face transplant on December 5, 2011, but it wasn't until February 2013 that a match was found. The delay was also partly due to the fact that Tarleton had a complex immune system, due to the antibodies that had built-up from her previous procedures.

"I believe I can safely say that Carmen is the most immunologically complex patient that has ever received a composite tissue transfer -- meaning a face or hand transplant," Dr. Bohdan Pomahac, director of the burn center and plastic surgery transplantation at Brigham and Women's Hospital, said during the press conference.

The entire procedure required more than 30 surgeons, anesthesiologists and nurses and took more than 15 hours. The face transplant not only covered the majority of her face, but parts of her neck tissue as well. She can now turn her head to the side and has considerably less plain in her neck. Tarleton also has more control over her lips, meaning she's drooling less.

Pomahac added that over the next three to six months, Tarleton will gain more muscle control. In six months to a year, she will start to have sensation in her face.

The donor, Cheryl Denelli-Righter, passed away from a stroke in February 2013. While Righter was an organ donor, family consent is necessary for face transplants, according to the hospital.

"While we are heartbroken at the loss of our beloved mother, sister, and friend, we are comforted by the fact that she chose to be an organ and tissue donor. In a life defined by kindness and caring for others, she has given the gift of life to four people," the donor's family said in a statement.

The donor's daughter Marinda Righter, said at the press conference that she was glad that Tarleton could receive her mother's face.

Tarleton, who is a registered nurse and mother of two, said she realizes that there's still a long way to go until she's fully recovered, but she's sure she can do it. She's since written a book called, "Overcome: Burned, Blinded and Blessed" to share her experiences.

"There is a lot to learn and take from horrific events that happen," Tarleton said. "I want others to know that they need not give up on healing themselves when tragedy strikes, but instead they can make a choice to find the good and allow that to help them heal."