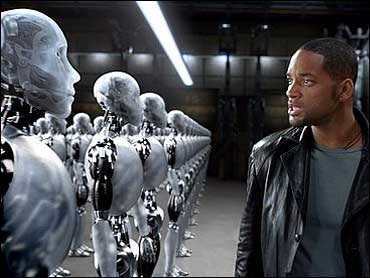 Will Smith has the summer crowd well programmed.

Smith's sci-fi thriller "I, Robot" was his latest No. 1 July debut, opening with $52.25 million and bumping "Spider-Man 2" from the top spot at the weekend box office.

"I, Robot" is Smith's best debut ever, coming in just ahead of "Independence Day," "Men in Black" and "Men in Black II," all July premieres that opened in the $50 million to $52 million range.

"My God, this guy opens movies," said Bruce Snyder, head of distribution at 20th Century Fox, which released "I, Robot." "He's just so likable, he takes something like science fiction, which can be a little cold, and he makes it warm and entertaining."

After two weekends in first place, "Spider-Man 2" slipped to No. 2 with $24.2 million, lifting its total domestic haul to $301.7 million after 19 days. The movie crossed the $300 million mark three days faster than the original "Spider-Man," according to distributor Sony.

Michael Moore's "Fahrenheit 9/11" came in at No. 5 with $7 million, raising its domestic total to $93.8 million. Moore's assault on President Bush over the Sept. 11 attacks has become the undisputed box-office champ among documentaries, passing the $84.4 million domestic haul of the IMAX film "Everest."

Inspired by the short-story collection of Isaac Asimov, "I, Robot" stars Smith as a police detective in 2035 who suspects a robot has committed a murder.

Along with the "Men in Black" movies and "Independence Day," "I, Robot" joins "Wild Wild West" and last year's "Bad Boys II" in Smith's unbroken string of summer smashes.

"He's Mr. July," said Paul Dergarabedian, president of box-office tracker Exhibitor Relations. "He's the perfect summer action star. He's a guy who seems like somebody fun to hang out with, but the guy can kick some butt when he has to."

"A Cinderella Story" stars Duff as a saintly California teen slaving away for her odious stepmother and stepsisters in a modern update of the fairy tale.

The movie drew mainly from Duff's teen and preteen fan base, with young girls and mothers and daughters making up most of the audience, said Dan Fellman, head of distribution at Warner Bros., which released "A Cinderella Story."

In narrow release, Jeff Bridges' and Kim Basinger's "The Door in the Floor" had a healthy debut, taking in $444,983 in 47 theaters. The family drama was adapted from John Irving's novel "A Widow for One Year."

The drama centers on a young Colombian woman who signs on as a "mule" carrying heroin to the United States.