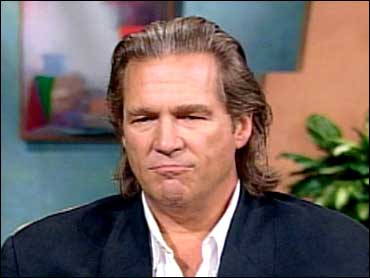 Back in 1998, the John Irving novel, "The Widow for One Year" sat atop the New York Times Best Seller's list. Now it has been adapted for the big screen in "The Door in the Floor." In it, Jeff Bridges stars as an artist dealing with a divorce, and the tragic death of his two sons.

Bridges visits The Early Show on Wednesday and tells co-anchor Harry Smith that for a self-described lazy person he keeps a busy man's schedule.

Speaking of "The Door in the Floor," Bridges says, though it is tragic, it is "a John Irving story, so there's a lot of comedy interwoven in the tragedy."

The film reunites him with his "Nadine" co-star, Kim Basinger. "It was great getting back together with her," Bridges says. "It was like we had a long weekend off and we're back to work again. Picked up where we left off."

Asked if he turns down movies, he says, "Yeah. I've got to be kind of dragged to the party. I generally like to do movies that I like to see. Those are movies where the filmmakers are kind of ahead of you."

After garnering rave reviews for his performance in "Seabiscuit," last summer and being nominated for four Academy Awards throughout his career, Bridges says, "It would be lovely to have that gold guy, you know. It's wonderful to be acknowledged, to get a nomination."

He credits his father Lloyd Bridges for teaching him the tricks of the trade. Jeff Bridges and his brother Beau grew up playing drowning victims and the like on their father's popular syndicated TV series "Sea Hunt" (1957-61).

Jeff Bridges says, "Probably my first acting memory is having to say my lines in the water and inhaling and not being able to exhale. He taught me all the basics."

His mother, Dorothy Dean, also reads all the scripts he gets. "I love to get her feedback," he says. "We rarely agree on the material but it's nice to get her opinion."

And when he is not on the big screen he occupies his time doing visual art pieces. You can find them on his Web site as well as his music and his commentary on his acting.

Some Facts About Jeff Bridges