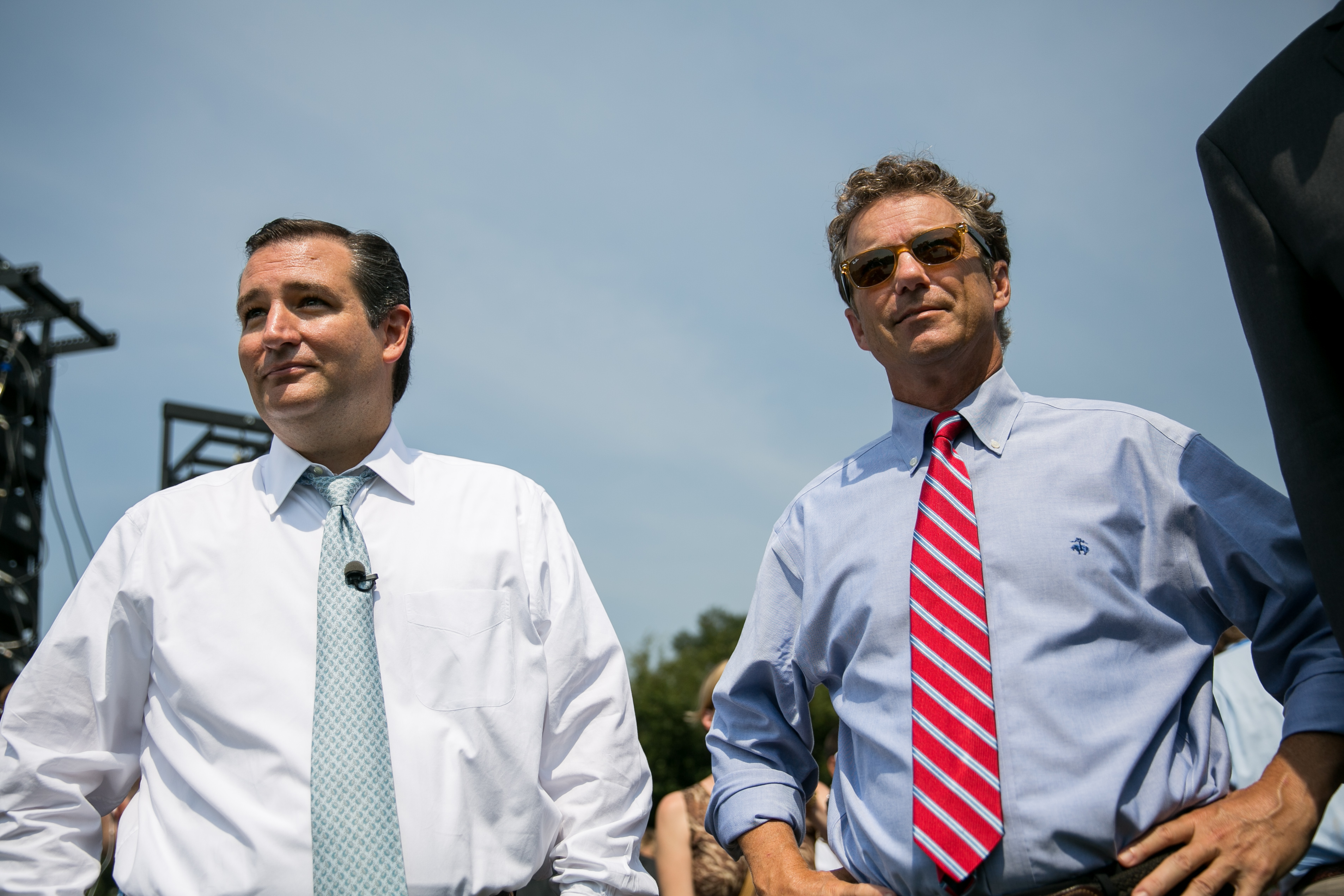 Kindred spirits on many issues, Sens. Rand Paul, R-Ky., and Ted Cruz, R-Texas, nonetheless find themselves at the center of an escalating dispute over social policy that could spill into the 2016 presidential primary.

Paul, who has been pushing the GOP to broaden its appeal, said last week that Republicans may need to mute the culture war to avoid alienating moderate, younger voters.

Paul's suggestion echoed then-Indiana Gov. Mitch Daniels' 2011 proposal of a "truce" on social issues, which was roundly criticized by religious conservatives. And right on cue, Cruz, who has built a reputation on criticizing fellow Republicans for impure thoughts, pounced on Paul's suggestion.

It was surely no accident that Cruz fired the shot across Paul's bow during an interview with the Register -- the biggest newspaper in the first presidential caucus state. Few voting blocs are as crucial to the fate of Republican candidates as social conservatives, particularly in Iowa, and with the next GOP presidential primary still in its infancy, the battle for the hearts and minds of the religious right has already begun.

"Sen. Cruz understands that Sen. Paul is his clear competitor in the race for the base, he's just trying to run to the right of him," veteran GOP strategist Ron Bonjean told CBS News. "It's the latest chess game of purity politics concerning the upcoming 2016 primary."

"I don't think he's ever going to be our nominee," added Feehery of Cruz, "because he's burned so many bridges, but he definitely appeals to a certain strain of the party. He's not into building bridges, or building a broader base, he's into preaching to the choir."

It's not just Cruz and Paul staking out some early terrain on the 2016 landscape. Other potential candidates have also recently offered some thoughts on the role of cultural issues in the next presidential race.

Former Gov. Mike Huckabee, R-Ark., who rode a wave of support on the religious right to claim victory in the Iowa caucuses in 2008, has publicly entertained the possibility of another bid in 2016. And in a recent speech before the anti-abortion Susan B. Anthony List, the former Baptist preacher urged Republicans not to downplay social issues.

"I don't have to quit being pro-life and pro-family to believe that the government should take less money from each family," he said. "I did not become pro-life because I got into politics. I got into politics because as a pro-life person I believe if we get this issue wrong we will get all the other issues wrong."

Taking a somewhat different tack was former Sen. Rick Santorum, R-Pa., a devout Catholic who repackaged much of Huckabee's coalition to win the Iowa caucuses in 2012. During a recent swing through New Hampshire, an early primary state in which the religious right isn't so dominant, Santorum stressed the need for a broader message.

"People say, 'How is it that you were able to win 11 states [in 2012]?' They say, 'Oh, it must have been because he was the 'social conservative' in the race,'" Santorum said. "I remind you that on the social conservative issues, just about everybody in the race had the same positions as I did."

His reputation as a warrior for the religious right, Santorum later told the Washington Examiner, "just doesn't tell the whole story." And to mark his branching out, the former senator will release a book next month titled "Blue Collar Conservatives: Recommitting to an America That Works." The tome will focus largely on bread-and-butter economic issues, not the cultural battles that have consumed much of Santorum's time on the national stage.

"Maybe he's learned some lessons from the last primary process," Bonjean speculated. "We'll have to see whether he can broaden his appeal."

Even Gov. Chris Christie, R-N.J., who has had a combative relationship with hardcore conservatives, recently burnished his culture war credentials during a speech before the Conservative Political Action Committee, noting that he was the first anti-abortion governor elected in New Jersey since the Supreme Court effectively legalized abortion in Roe v. Wade.

Riffs like that, Bonjean said, could help Christie repair his damaged relationship with some elements of the GOP primary electorate. "He's flexing his anti-abortion muscles to show conservatives where he truly stands so they don't' just think he's a liberal from New Jersey," Bonjean explained.

Feehery concurred: "I think he's trying to recast himself. Right now he's in a bad spot with [the controversy surrounding the George Washington Bridge,] and I think that he wanted to let conservatives know that he agreed with them on a major issue that they care about, and that he could be a good ally for them in the future."