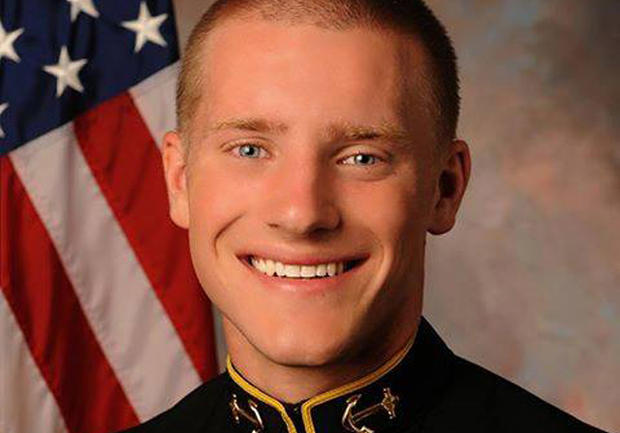 ANNAPOLIS, Md. -- Navy football player Will McKamey, who has been hospitalized since collapsing at practice three days ago, has died while in a coma. He was 19.

The academy says the freshman running back from Knoxville, Tenn., died at the University of Maryland Shock Trauma Center in Baltimore on Tuesday with his family by his side.

"We are all so very heartbroken by the death of Midshipman Will McKamey," Naval Academy Superintendent VADM Mike Miller said in a statement. "This is devastating news for his family, his classmates, his teammates and the entire Naval Academy family. We offer our deepest condolences to Will's family, friends and shipmates in the wake of this tragedy."

He collapsed during spring practice Saturday and was airlifted to the Shock Trauma Center.

Earlier this week, McKamey's family said in a statement released through the school that their son did not sustain "a bad hit or unusual or extreme contact" in that practice.

"The Navy coaches have poured through the films of practice and seen nothing more than Will carrying the football normally, doing what he truly loves," the family said.

McKamey's father, Randy, a high school football coach at Grace Christian Academy in Knoxville, posted on Twitter that his son underwent surgery Saturday to relieve pressure on the brain.

Will McKamey played for his father and ran for more than 2,000 yards as a senior at Grace Christian in 2012. He suffered a head injury during a game late in the season that caused him to be hospitalized.

McKamey would not return during his senior season, but he would be named Mr. Football in the state of Tennessee in 2012, CBSSports.com reported.

His family said he had been cleared to resume playing football after seeing four neurosurgeons and undergoing several CAT scans and MRI exams.

The 5-foot-9, 170-pound McKamey did not play in a game last season. He was an oceanography major in 3rd Company at the Naval Academy.

"During this most difficult of times, first and foremost, our prayers and thoughts turn to Randy, Kara and their beautiful family," Navy coach Ken Niumatalolo said. "Our deepest and most sincere condolences go out to their entire family and friends. As our Navy football family mourns the loss of one of our brothers, we also celebrate and honor his life. He loved his family, his friends and his teammates. The Brotherhood loves you! Keep the ball 'high and tight' in Heaven."