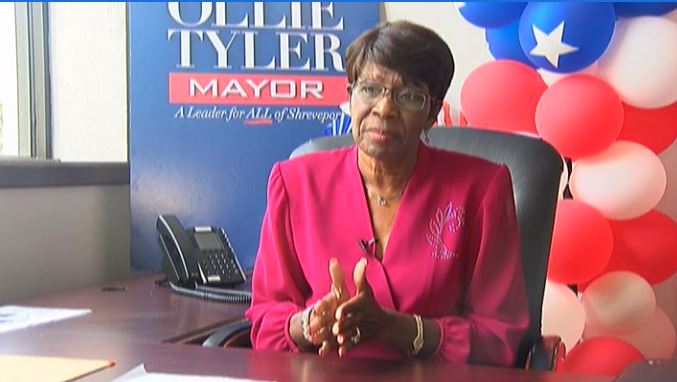 SHREVEPORT, La. -- A 46-year-old homicide case has suddenly emerged as an issue in the mayoral race in Shreveport, Louisiana. The leading candidate in the race, Ollie Tyler, told the media that she killed her first husband in 1968 during a domestic violence incident.

In August 1968, Ollie Tyler, then 23, shot her husband in the chest in her mother's bedroom in Shreveport. The couple had been married for 11 months. Tyler, who used her husband's last name, Harris, told police at the time that she was repeatedly beaten by her husband during their marriage.

And, that she was so frightened of her husband that she bought a .22-caliber pistol at a pawn shop just two weeks before the shooting.

The entire account is in police reports disclosed Friday by the Caddo Parish District Attorney's Office.

Tyler was at her parents' home that August day in '68 when her husband arrived in the late evening and the two began arguing. Tyler told police that her husband had been drinking. Her parents told authorities that Harris, who was 24, started to beat his wife while she was lying on her mother's bed.

Tyler's mother, Ida Spearman, had taken Tyler's gun away from her earlier that day and tried to "hide" it in her apron. Tyler told police that Harris struck her three times on the side of her head.

She left her mother's bedroom, got the gun from her mother's apron and returned to the bedroom and pointed the gun at Harris.

Tyler told police that she was standing "ten paces" from her husband when she shot him in the chest. She said, "I was hysterical."

She dropped the gun and Tyler's father got Harris out of the bedroom. At that point, Tyler told police she picked up the gun and turned it on herself.

"I wanted to shoot myself in the heart," she told police. But before that could happen, her 15-year-old brother stopped her and she shot herself in the left leg.

Tyler was so distraught after the shooting that on the way to the hospital, she jumped out of her father's moving car in an attempt to kill herself.

On Thursday night, Tyler told the Shreveport Times a different version of the story. She said that Harris tried to kill her with a gun. She said the first shot struck her in the leg during the struggle with her husband. Then the gun went off again and Harris was shot in the chest.

William Bradford, Tyler's spokesperson, told Crimesider that the incident was "the most dramatic event" in Tyler's life, so her memory from 46 years ago may be affected by the terrible event.

Back then, Tyler was arrested and charged with homicide. But the case was, apparently, never processed beyond charges. The Caddo Parish District Attorney's office has searched the court files and can find no record of how the case proceeded.

Tyler told police that her husband had repeatedly beaten her. She went to the hospital at least once after a beating.

In 1968, Tyler told police, "I didn't mean to pull the trigger." Thursday, Tyler told the Shreveport Times the "shooting was accidental."