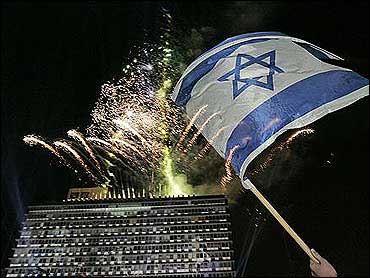 This column was written by Lisa Schiffren.

Israel's Independence Day, celebrated this week, is an odd holiday for Jews. It is a happy day, with picnics and singing and joy at the existence, after all these millennia of wandering, of a Jewish homeland, which will provide, depending on your religious views, either "the dawn of (messianic) deliverance," or, at the very least, a point from which to safeguard the physical wellbeing of Jews.

It's astonishing how many Jewish holidays are days of mourning - commemorations of loss, observed with prayers, fasting, or moments of painful silence. That is also true for modern Israeli holidays. Two days ago was Yom Hazikaron - Remembrance Day for the soldiers who have died defending Israel, much like Memorial Day. A week ago was Yom Hashoah - to pay respect to the six million Jews slaughtered in Europe during the Holocaust.

Even our happiest, most light-hearted holidays, Hannukah and Purim, are about ultimate triumph in face of near-death experience. You could, as I used to, find this depressing. Or you could understand that the annihilation of peoples happens all the time. And what is extraordinary about the Jews is survival over thousands of years as a people with a God and a plan - even if, at the end of that time, there are only 15 million of us left. Though the question of longevity for the Jewish homeland is a different matter altogether.

Very early one June morning when I was about six, I wandered out to the living room to find my normally apolitical mother standing stock-still, listening to the news with tears in her eyes. Israel, she explained, had been attacked by all of the surrounding Arab nations. It was the start of the Six-Day War. And, unlike the wars to follow, the watching adults were not in the least sure that Israel would survive.

But survive it did. At the tender age of 19, the young state beat back an existential threat.

That war changed everything. It changed the way Jews the world over thought of themselves. Suddenly the world's biggest victims were astonishing warriors. The sons of men and women who had come as living skeletons from the death camps of Europe 20 years earlier could defend their reclaimed homeland. Yeshiva boys in Brooklyn stopped tolerating bullying from their Irish and Italian neighbors. Even the United States of America re-evaluated its relationship with Israel, deciding that a serious alliance might be mutually beneficial.

Those of us Jews who grew up in that era may not have been able to fully grasp Israel's genuine vulnerability.

In that short week in 1967, the adolescent state assumed a solidity it had not previously possessed. That should have been a pure good for a battered people looking for the normality of a homeland above all. But there are no unalloyed victories in this world. Israel's newfound strength slowly, over the ensuing decades, became the genesis of the world's case against the tiny nation - and, of course, the Jews who inhabit it.

It didn't help that the attacking Arabs had encouraged Israeli Arabs to flee, and the less economically talented of them landed in refugee camps - in which their fellow Arabs have kept them through these many decades. The stunted, death-loving heirs of those unlucky Palestinians, who have, as one writer recently pointed out, created a failed state even before getting a state, became, over time, the cause of the world's rising antipathy towards Israel. And they became the rationale for continuing Arab antipathy towards Israel, by nations who cannot bring their own people into a reasonable facsimile of modernity.

In 1968 a hit song in Israel was called "Mahar," which means "tomorrow." It is a bouncy if saccharine song about all of the happiness, friendship with the neighbors, and children playing in peace that will come, tomorrow. The song was still popular a decade later, when I was a student in Jerusalem. I heard the students at my children's middle school sing that song last night, and it could not have been a more poignant testament to the naïve generation that hoped the Six Day War had settled matters and put an end to the Arab desire to destroy Israel militarily.

But naïveté is not a crime. And sometimes it is helpful. What would a 20-year-old Israeli in 1967, delighted to have Jerusalem reunited, have thought if you told him that the next 40 years would bring unending hot wars and cold peace? Would he have wanted to raise his children there through wars of attrition, intifadas, battles in Lebanon, Iraqi Scuds falling on Tel Aviv in 1992 because the world resisted a takeover of Kuwait, and terrorism unending? To be sure, for all of the Israelis who found it unbearable and left, others have stayed and turned an impoverished desert strip, founded within a year of Pakistan and Burma, into a democratic first-world outpost. They did that entirely by dint of human capital and hard labor, in the face of a genuinely stupid political system, peopled by politicians with all the usual weaknesses. But ordinary Israelis are tired of living at war.

And now, sometimes the Israeli future seems just a little less clear. There is no sudden news report to instill fear, of course. But there is a daily, incremental accretion of threats to Israel's existence: A particularly ineffectual prime minister, looking to compensate for his failure in a war, makes untenable concessions of land and sovereignty. An American secretary of state who sees the Palestinians as the oppressed blacks of her Alabama childhood pretends to deplore, yet turns a blind eye to, their willful renunciation of peace and embrace of terror. The terror groups that run the Palestinian territories continue to execute anyone who tips off the Israelis to terrorist threats. A nearby nation, under the sway of radical Islam and finally Jew-free after 2,500 years, threatens to annihilate Israel with nuclear weapons it is building. An American presidential candidate wants to chat with that state's leaders.

The Arabs have long noted that the Crusaders came to the Holy Land, won some battles, and built some fortresses, but were chased out after a couple hundred years. They could outlast the Israeli invaders too. When I first heard that, a long time ago, Islam seemed weaker than it might have under Saladin, or than it does now. I am sure I sneered. But now a couple of hundred years does not seem like so long a time for a nation. Sixty is just a start.

So, for Israel at 60, the question of survival is still an open one. I can only say that for the first time in my life I now understand the nation's vulnerability, and the fears its supporters must live with.
By Lisa Schiffren
Reprinted with permission from National Review Online