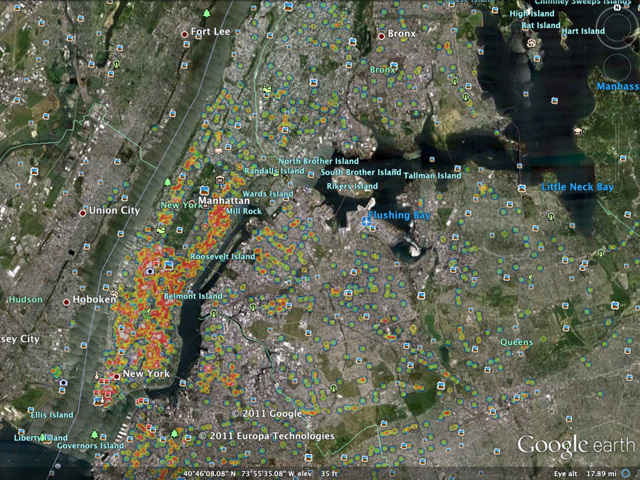 Hyperpublic is an early-stage startup, with only $1.15 million in seed funding. However, its technology shows promise in advancing a fundamentally interesting idea. The company provides location-specific databases of places, shopping deals, events, and other kinds of information that software developers could use in their applications.


The most obvious way Groupon could use Hyperpublic is to enhance its deal business. Here's just one data-visualization example that Hyperpublic put together for its developers: pizzerias in the New York metropolitan area overlaid on top of a Google Earth image:

A variation on the theme involved charting the route for a tour of Manhattan pizza parlors, with restaurants separated by no more than 0.1 mile and arranged so slice lovers didn't have to hit the same place twice, as seen in this map:

Hyperpublic's developers clearly have a knack for manipulating geography-based information and displaying it in interesting ways. And that jibes nicely with Groupon's business of helping consumers take advantage of local deals.

Combined with Groupon's databases, you can imagine some of the commercial possibilities. For example, how might a romantic -- but thrifty -- person planning a date put together deals on Indian food, movie tickets, and post-cinema ice cream for two? Expect Groupon to tap these new technical capabilities as it seeks to expand its marketing and sales, while branding competitors as deal-only sites.

Get your Groupon in every app

An even more interesting possibility might involve Groupon making itself into a service that third-party app and website developers promote. Hyperpublic had been an open resource for developers. Since the acquisition announcement on Friday, the official word has been that the company's API data platform would close by March 2, at which point all developer user data is supposed to get deleted.

But Groupon doesn't have to fold the API for good. And why would it? One of the company's financial bugaboos has been the vast sums it has spent on marketing. That's been an expensive undertaking.

In its first and most recent earnings release, Groupon noted that the number of customers who had purchased at least one deal in the trailing 12-month period had increased by more than 275 percent year-over-year and more than 20 percent quarter-over-quarter. The latter figure is more impressive because it amounts to a whopping 1,600 percent annual growth.

To keep things moving, in short, Groupon needs to sell more efficiently. One way to do that would be to get third parties to embed deals in their websites or mobile apps. For example, instead of Groupon offering the date-night application, it could make dinner and ice cream deals available to a theater chain's mobile app -- reserve tickets and make dinner plans at the same time.

It could be a great way for Groupon to expand, as well as a way to help freeze out competitors lacking an API.