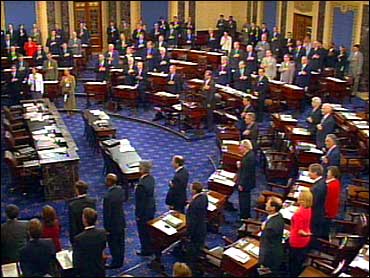 (CBS)
Last month, when Republicans tried to stall energy legislation with hundreds of amendments, Democrats hired a speed reader to get through them all. Now, with Democratic leadership barreling through its hefty agenda this summer, it looks as if the speed reader's services may be needed once more.

Let Freedom Ring, a non-profit, grassroots organization that supports a conservative agenda, announced an initiative today urging members of Congress to sign a pledge to read and give citizens the opportunity to read any health care reform legislation before voting on it.

"For something as significant as health care reform, which influences 16 percent to 17 percent of GDP, I think it is important for legislators to know what they're voting on, and not have lobbyists and staff members be the only ones who know what's in there," said Colin Hanna, Let Freedom Ring president.

The pledge was distributed to members of Congress on Tuesday, and Hanna has so far received signatures from Senators James Inhofe (R-Okla.) and Jim DeMint (R-S.C.). Certainly, Hanna said, it would be in the members' best interests to sign it.

"I can assure you, legislators will be held accountable if there are parts in there their constituents find objectionable," he said.

Meanwhile, the Sunlight Foundation, a non-profit with the goal of increasing government transparency, is raising similar concerns about the energy bill that the House of Representatives is slated to vote on Friday.

With a full House vote just days away, the authors of the deal are still negotiating the details, the New York Times has reported. In a measure as complex as the energy bill -- which consists of around 1,000 pages -- the details can make a big difference.

"The fastest speed-readers and the most intelligent minds can't make informed decisions with that much time. How can Congress?" Sunlight Foundation Engagement Director Jake Brewer said today in a statement. "The problem here is the bill wasn't developed in the open in a committee, so no one -- including those members of Congress not on the Energy Committee -- knows how this latest version was created."

The foundation points out that while the bill, formally called the American Clean Energy and Security Act, was 946 pages long last week, it has ballooned to 1,201 pages in recent days with little explanation for how or why. The group is supporting a bill introduced last week that would require the House to post all non-emergency legislation online 72 hours before debate begins.

"Legislation has become so complex, you can really make the arugment the system the framers devised is broken," he said. "Most bills are voted upon without those voting understanding much of what's in it."

That's when members are forced to resort to speed readers. "It makes a mockery of the process," Hanna said.