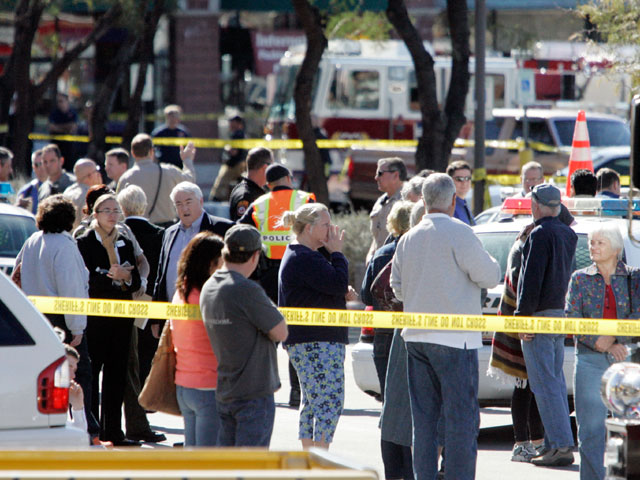 Back in 2009, the Arizona Republic wondered whether its state's gun culture was creating an "image problem" for Arizona.

Today, after the horrific mass shooting in Tuscon that left six dead and a congresswoman in critical condition, many are left baffled over that culture and the state's lax gun laws, and some are wondering whether it's time for a change. Still, gun ownership is deeply ingrained in Arizona life, and many others are reluctant to change that.

Democratic Rep. Gabrielle Giffords is in intensive care after being shot in the head on Saturday. Alleged gunman Jared Loughner open fired at a town hall-style meeting Giffords was holding at a Tuscon grocery store, killing six people and injuring 14 others.

Carol Ruh, president of the Arizona Women's Shooting Associates, told the Hotsheet that while some of the state's recent moves to loosen the rules for gun ownership have her concerned, she doesn't think gun rights shouldn't be scaled back because of the incident. Furthermore, she doubts many Arizona residents will change their minds about gun laws in the wake of the tragedy.

Gun ownership simply "is Arizona, it is the West, it is the culture," said Ruh, a full-throated supporter of Second Amendment rights. Her organization educates women about the different disciplines of shooting sports, and its website says it stresses "safety, variety and fun."

But Ruh said she was troubled when, last year, Arizona became one of three states to allow the carrying of concealed weapons without a permit.

"It has created some concern for most of us who are educators," Ruh said. "You have to get a driving permit and get driving lessons before you learn how to drive -- I still feel the same way" about guns.

She added, "People realize now that [gun] education is important, more than they ever have before."

Guns are permitted just about everywhere in Arizona except a business or doctor's office, the Washington Post explains, including the state Capitol. Concealed weapons are even allowed into establishments that serve alcohol as long as the gun owner isn't drinking. Any law-abiding resident older than 18 can buy or possess a firearm, though federal law limits the purchase of a handgun to those 21 or older.

The state's open-carry laws were on full display in August of 2009, during a health care reform rally in Phoenix with President Obama. Phoenix resident Christopher Broughton argued with Obama supporters and gave media interviews with an AR-15 rifle strapped to his back and a pistol in his side holster. Police watched about a dozen other armed protesters outside of the rally.

The incident drew the derision of the New York Times, Comedy Central's Jon Stewart, and even famed travel writer Arthur Frommer, who wrote that he would no longer visit Arizona, fearing for his personal safety. "The number of guns that are now being carried by citizens in Arizona is becoming frightening," Frommer said on NPR, the Arizona Republic noted.

Other recent incidents have put the spotlight on Arizona's gun laws.

In the 2010 midterms, Republican candidate Pamela Gorman, running for Arizona's third congressional district, raised eyebrows when she ran an ad in which she is shown firing multiple firearms, including an automatic rifle. The Republican running against Giffords last year, Jesse Kelly, held an event on June 12 urging supporters to "Get on Target for Victory in November/Help remove Gabrielle Giffords from office/Shoot a fully automatic M15 with Jesse Kelly." (To be fair, plenty of 2010 candidates brashly displayed their gun-toting credentials in campaign ads.)

In addition, Giffords has already been the target of incidents related to guns. In August of 2009, someone dropped a handgun at a Giffords town hall meeting, prompting calls to police from Giffords' staff, and around the time of the health care debate, someone shot out the window of Giffords' office.

In a column Sunday, Arizona Republic columnist Laurie Roberts blasted the Arizona legislature for creating the conditions for Saturday's mass shooting. She called the group "a Legislature that has slashed funding for the seriously mentally ill. A Legislature that has loosened gun laws to the point that any nutball can legally walk around with a pistol in his pants."

"We don't yet know what role, if any, the actions of the Legislature played in what happened on Saturday," Roberts continued. "But if ever there was a time to re-examine the cliff we are headed toward, this tragedy certainly provides it."

Many Arizonans, however, would vehemently disagree with Roberts about rethinking the state's gun laws. Giffords, a third-generation Arizonan, is herself a gun owner and an advocate for gun rights.

In 2009, the Washington Post took a fascinating look into the strong gun culture in Arizona and other Western states. Phoenix is home to the nation's largest public shooting range, and more than 220,000 shooters a year visit the shooting ranges around the Phoenix area. Even the state flag was designed by a colonel in the Arizona National Guard who served as the captain of the unit's rifle team in 1910. He designed the flag, which eventually became the state flag, when at a rifle competition the Arizona team was the only team without an emblem.

Ruh said that the deplorable actions of one individual shouldn't take away from that culture.

"What are you supposed to do, turn around and say no guns now?" she said.

Even the legislation proposed in Congress this week to ban high capacity ammunition clips is a bad idea, Ruh said.

"It doesn't make any difference," she said. "You can do as much damage with one as you can with many." Ruh said high capacity ammunition rounds are used in competition shooting, a sport many Arizonans partake in.

Ruh said her "heart and condolences" go out to the victims of Saturday's shooting, but her opinion on gun laws hasn't changed. She said she expects other Arizonans feel the same way.

"They're going to say this was a horrible thing, no dobut, but that doesn't mean this is going to have an effect on them, or their guns."