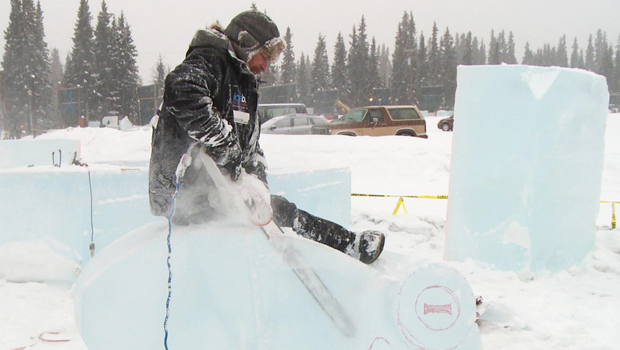 Some works of art truly deserve to be called COOL ... the ones Lee Cowan will be showing us from near the Arctic Circle, for example:

On the list of the coldest jobs on the planet, harvesting ice near the Arctic Circle holds a chilly distinction.

These massive blocks are known as Arctic Diamonds -- so clear you can read a newspaper through them.


And every year they're stacked on land, waiting for chisels and chainsaws to turn them into jewels.

With the sound of a blowing horn, the World Ice Art Championships got underway in Fairbanks, Alaska, recently. It's an annual race to see who can carve the biggest, baddest, most beautiful ice sculptures ... all with the countdown clock ticking.

"We like to say it makes our Winters go faster, 'cause the Winters are long in Fairbanks!" said Dick Brickley, who oversees the competition -- which isn't for the faint of heart.

"This is dangerous, no doubt about it," he said. "Knock on ice! This is really fast-moving and dangerous."

Eighteen teams of four people have six days to shape and mold more than 20 tons of ice -- each.

"We're doing an octopus taking down a ship, and there's a girl driving the ship and she's not having it," said sculptor Buddy Rasmussen, who came here from San Antonio, Texas.

And he's competitive: "I want to win!"

His teammate is from Houston, who's so smooth at slicing ice they call him Reverend Butter.


"We're all put here for a reason," he told Cowan. "This is my call and this is my reason."

Junichi Nakamura, a former potato farmer from Japan, is the man to beat this year. He's out to sculpt a giant dragon. He holds more ice carving world championships than anyone else here. And yet, despite his experience, he gets so nervous he chain smokes through the whole competition.

He has reason to be anxious: Nipping at his heels are these chiseling folks: husband and wife team, Steve & Heather Brice (he's won 16 world championships; she's won seven). They are carving a comic book -- every superhero from the Hulk to Wonder Woman.

"When you're roughing it out, you can see the potential of it," said Steve. "But when you finish it, it has the ability to give you an adrenaline rush."

Temperatures can drop to 50 below zero. Chris Foltz paid a big price for that last year:

"I had my metal earrings in and I forgot about it and lost a nice chunk of my ear," he said. "But luckily it was just like the outside, so you can't really see it much, and it fell off before I got on the plane, so that was good."

And then there's the danger of an ice collapse. One of Junichi's sculptures was pushed past its limit.

But there is beauty, too -- a sense of serenity despite the chainsaws.

"There's just a certain magic to ice," said Heather. "Especially carving at night, you hear the tools working away, and the snow kind of flying through the air through the lights. At the end it's just like magic."

"It'll get clearer and clearer as time goes by," said Buddy Rasmussen of the ice. "It will slowly evaporate as the winds hit it, and it'll just look like glass."

Ice carving is part brute force, and part delicate dance. Portions of the sculptures are set in place with nothing more than water -- "Arctic glue," they call it. It instantly freezes the pieces together, as long as the air is cold enough.

The downside, of course, is that the results of all this hard work will eventually melt away.

"It will go back into the ground and eventually get back into the water source. You're essentially carving from previous ice carvings," he said.

All the carvings were going well, until, that is, the clouds rolled in, and the temperatures crept above freezing.

"I'm a little frustrated right now," said Heather, "mainly because of the weather."

"So all this hard work is basically one big pile of slush," said Reverend Butter.

His pirate ship was sinking in its own water. "You work with what you've got and in the end you gotta be proud of what you did, so, we are."

Junichi's dragon almost seemed to be crying -- and so was Junichi. 'The water was dripping off the sculpture," he said.

The judges even pushed back the finish to give the artists time to make adjustments.

Every team used every minute right up until the final horn.

The race was over, drips or no drips.

But no one really seemed to notice; crowds poured in to capture the finished works before they melted any more, and the judges finally had their say.

The Hulk and his superhero accomplices earned Steve and Heather Brice a spot on the podium.

But the one who carved out the top spot was, once again, Junichi Nakamura. Maybe all that smoking like a dragon paid off.

As the crowds thinned, the air once again cooled. You could almost hear the ice sculptures themselves sigh with relief. Their integrity (and the artists' reputations) were safe -- at least until the sun comes out.